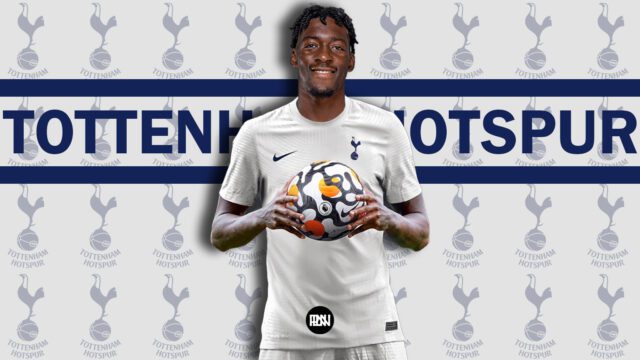 The transfer window for all European clubs officially opened about a week ago, and many clubs are already finalizing deals for new players in a bid to bolster their squads. Premier League giants Tottenham Hotspur are not one to be left behind, with the London club already making moves in the transfer market.

The Lilywhites have already announced the signing of goalkeeper Fraser Forster and forward Ivan Perisic, on a free transfer from Southampton and Inter Milan respectively. The Englishman is expected to deputize for Hugo Lloris, who is expected to retain his number 1 status, while Perisic will add experience and competition for the forward line. With two signings done and dusted, Tottenham are already looking towards other targets, as manager Antonio Conte has been promised new signings and significant backing in the market in a bid to challenge the top teams next season.

A player on Spurs’ radar is AS Monaco’s 24-year-old central defender Axel Disasi, with the North London club tracking the Frenchman for almost two years now. Tottenham Hotspurs are in the market for a new defender, as Conte looks to strengthen his defense and the Spurs scouting department have identified Disasi as the perfect candidate to play in the heart of their defense.

Tottenham Hotspurs are set to have a few departures in the defense department, with all of Japhet Tanganga, Joe Rodon and Davinson Sanchez rumored to leave the club this summer. Davinson Sanchez has been a regular fixture in the Spurs defense under Antonio Conte, but he has been erratic at times and the Italian manager is reportedly ready to part ways with him. Reports suggest that Conte is looking for a suitable player to partner Argentine Cristian Romero and Eric Dier or Ben Davies in his preferred three-man defense, and Axel Disasi fits the bill perfectly.

WHAT DOES AXEL DISASI BRING TO NORTH LONDON?

Axel Disasi first caught the eye of the footballing world at Reims, where he earned a reputation for himself as one of the most promising young defenders in France. The 24-year-old then joined AS Monaco in the summer of 2020 and has improved massively to become one of the best defenders in the Ligue 1. In his debut season for the Principality club, Disasi featured 35 times at Monaco, helping them finish third in Ligue 1 on 78 points. Only Paris Saint-Germain and Lille were better than them in the French top flight that season. He became more important for Monaco during the recently concluded campaign, playing in 45 games across all competitions and becoming one of Niko Kovac’s trusted lieutenants. His performances coupled with his perfect record of not missing games with injury led him to captaining the side on several occasions, just a season after signing for the club.

The Frenchman’s many qualities make him one of the most exciting prospect in European football. His tall frame at 6ft 3in is a huge help in the air, both in attack and defense. He exudes a commanding presence in the backline, as seen at AS Monaco, which has helped the Principality outfit keep a previously leaky defense, water tight. The 24-year-old counts Thiago Silva as his idol, and has modelled his playing style based on that of the Brazilian veteran.

The Frenchman has a penchant for tackling and is always strong with excellent timing. Like Silva, Disasi has learnt to read the game well, anticipating opposition passes and intercepting them. The Premier League’s physical game should not intimidate the defender, and he should be able to adjust fairly well to the English game.

Conte is known for imbuing positional awareness upon his players, and although Disasi can sometimes be lacking in that field, he can only improve under a brilliant coach like the Italian.

According to Spanish news outlet Marca, there are many clubs rivalling Spurs for the signature of the 24-year-old defender, with La Liga club Atletico Madrid also in the race. However, the Spanish club have to make room for any new signing, and Diego Simeone’s side will be forced to part ways with a few players if they want to sign anyone this summer. The North Londoners are reportedly very close to submitting an official bid for Disasi, and there should be more updates on this transfer in the next few days.

Daniel Levy has finally given in and after securing Champions League football, has authorized a big budget for the summer. Sporting Director Fabio Paratici and Antonio Conte are said to be working hard on bringing new and quality players to Tottenham, as they hope to end their miserable trophy drought next season. Axel Disasi could be a very shrewd signing for the Premier League club, but it remains to see if AS Monaco are willing to sell the talented Frenchman.