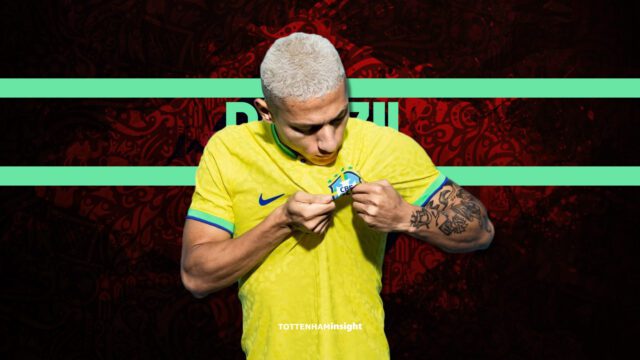 It was a little over a month ago, that Spurs and Brazil man Richarlison thought his World Cup dreams were over, limping away from the Tottenham Hotspur Stadium on crutches, after featuring in the win over his old club Everton. In fact, it was a reunion to forget for the former Fluminense and Watford man, hobbling off the field early with a calf problem and the dream and opportunity of becoming Brazil’s main man at a World Cup in tatters.

Fast forward a few weeks, and that fear has proven short-lived. The 25-year-old, lining up alongside the likes of Neymar, Vinicius Jr, Raphinha and Lucas Paqueta, outshone them all to become the lightning rod Brazil needed to overcome a tough and aggressive Serbian resilience.

Richarlison marked his tournament debut with a brace as Brazil opened their 2022 FIFA World Cup campaign with a 2-0 victory at the Lusail Stadium. The first, was a poacher’s effort, arriving at the right place at the right time to notch a rebound, but the second was simply sensational, an early goal of the tournament contender.

But the journey to becoming a showman on the biggest stage for one of the world’s most prestigious footballing nations has not been an easy one, but a long and stretched journey for Richarlison. He was still in the colours of Watford when Brazil were last at a World Cup in 2018. In the four years since, he’s acheived two big Premier League moves whilst gradually becoming the man that Tite believes can break the Brazilian no.9 curse.

That evening hobbling off the pitch against his former employers felt like all his hard work and sacrifices had been for nothing. Thankfully, the injury proved a minor blip on his journey. A few weeks on, he was seen celebrating at home with his family, as his name was being read out by Tite, a joyous inclusion into Brazil’s World Cup exploits in Qatar. At that time, he was still recovering and nursing a bit of that calf injury, yet still found the energy to soak in the moment with his family. And it’s been a deserved call-up, no doubt about that.

Since Richarlison’s move to Spurs last summer, for a fee of around £50m + £10m in potential add-ons, the 25-year-old has indeed taken his game to new heights. No longer is he a marauding winger diving and dribbling into oblivion, but a star-studded forward providing decisive world-class moments when his team needs it most.

It’s amazing to think, the first couple of months in North London had seen him featuring from the bench, but with recent injuries to both Kulusevski and Heung-Min Son, the Brazilian stepped up when it mattered. In all fairness, he’s yet to score a Premier League goal for Spurs in the 10 games he’s featured in but that hasn’t mattered to Conte. He offers a cutting edge, resilience, application and quality that Conte desperately requires.

Two goals and two assists from 15 games in all competitions for Spurs means Richarlison probably entered the Brazil squad in worse form than many of his counterparts, but whenever he’s featured for Tite, the former Fluminense star has rarely let him down. In fact, he’s become the no.9 Brazil have been crying out for since the days of Ronaldo.

He was the top scorer at the 2020 Olympics when Brazil won the gold medal and Brazil’s top scorer in 2022. At the time of writing, he’s bagged 10 goals for his country in his last nine games. In World Cup qualifying, he scored six goals in eight games. Stats that many Brazilian strikers before him had failed to achieve, on a similar consistent level. Fred, Jo, Luiz Adriano, and even Gabriel Jesus all failed to capture Brazilian hearts, a continuation of the curse of becoming the nation’s trusted no.9.

In a little over a year, Richarlison who started out as a winger has now broken that curse and the way in which he took his goals against Serbia means the 25-year-old is well on his way to becoming an elite no.9 in his own right. The first goal showcased his instincts, movement and being at the right place to score, but it was the second that proved that he could well be the man to fire Brazil to 2022 World Cup glory.

He peeled off his marker brilliantly, with his first touch looping up into the air, before executing a remarkable swivel, and unleashing a remarkable capoeira style acrobatic effort that many of those strikers before him could only dream of. It was a goal worthy of winning the prestigious trophy itself.

It was a beautiful goal indeed. One crafted out of practice, elegance and skill. A moment that many will try to replicate. It was a moment many of the world’s young footballing stars dream of achieving on the world stage. It’s fitting that Richarlison had been attempting to master that art before a 2022 World Cup ball had been kicked for Tite’s men. The continuous practice made perfect.

On a night when their main superstar Neymar went off with what looks like an injury that could end a World Cup dream, Richarlison took on the baton to deliver his own World Cup story.

Remember that Copa Libertadores winning forward Gabriel Barbosa, Roberto Firmino, and Matheus Cunha had all been left at home, serving as another reminder of the faith Tite has on Richarlison to lead Brazil to glory. It also serves as a pretty telling reminder that the Tottenham Hotspur star has seen off such stark competition to make the arguably cursed but highly coveted Brazilian No 9 jersey his own.

“It is a child’s dream come true,” Richarlison smiled.