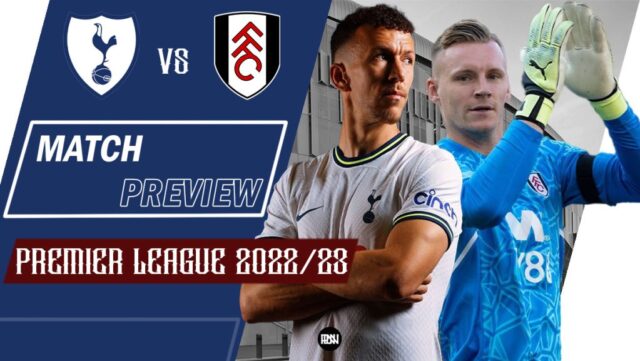 The Premier League action continues as we head into the sixth gameweek of the season this weekend. Saturday sees another London Derby, with new boys Fulham taking on Tottenham Hotspur away from home.

Tottenham Hotspur were last in action against West Ham United in the midweek fixtures, drawing the London derby 1-1 away from home. Harry Kane’s low cross into the box was bundled home by Hammers defender Tilo Kehrer for an own goal in the first half, and Spurs led going into the break. However, West Ham threatened to score from the start, testing keeper Hugo Lloris a few times in the opening minutes, and finally equalized in the second half, after a neat flick from Michail Antonio put Tomas Soucek through on goal. The Czech midfielder then scored with a delightful finish as the London Stadium erupted.

Spurs lost all momentum after that and were very lucky not to lose, with the Hammers missing a few very easy chances. The draw at the London Stadium saw Spurs remain unbeaten this season, but left them 4 points behind league leaders and rivals Arsenal. Manager Antonio Conte admitted his side was sloppy which cost them 2 valuable points, and said he hoped to see a better side on the weekend.

Fulham were also in action in the midweek as they kept up their great start to life in Premier League. The Cottagers turned heads with their opening game draw against Liverpool, as they made life very tough for the Reds. They managed to score their first victory in their third game with a brilliant last-minute winner against Brentford, and then managed to win again in the midweek with a 2-1 win over high-flying Brighton and Hove Albion.

The Cottagers have 8 points in 5 games now and sit 7th in the table. Manager Marco Silva has managed to take points of established managers like Jurgen Klopp, Graham Potter, Bruno Lage and Thomas Frank, and he will be hoping he and his boys can continue the momentum into the crucial part of the season ahead. They face a very tough opponent in Tottenham this weekend in what is set to be their second London derby in the space of a week.

Antonio Conte confirmed in the build-up to the clash against West Ham, that Argentine defender Cristian Romero and young midfielder Oliver Skipp were back in training. The former did not make the squad, whereas the latter was an unused substitute at the London Stadium, and it remains to see if they are fit enough to feature this weekend. Harry Winks left the squad to join Sampdoria on loan along with Sergio Reguilon who has joined Atletico Madrid on loan, which was confirmed by the club before the game against West Ham. Lucas Moura and Bryan Gil are unavailable through injury and are set to miss out this weekend as well.

For Fulham, Harry Wilson and Manor Solomon are still out with long-term injuries, although they are inching closer to a return to action. Neeskens Kebano impressed against Brighton and Hove Albion, assisting the first goal, and will be expected to keep his spot in the starting 11 on Saturday. There are no significant injury concerns for the Cottagers and Marco Silva will have a strong squad to choose from on Saturday.

The Cottagers have most frequently lined up in a 4-2-3-1 formation this season, with new signing Joao Palhinha and Harrison Reed in the double pivot and Andreas Pereira in the number 10 role just behind Aleksandr Mitrovic. Marco Silva’s attacking style dominated in the Championship, scoring 106 goals in 46 games. He has shown a similar intent to play attacking football this season as well, and his teams have been setup to hurt opposition with pace and power. Pereira’s fluidity in the number 10 roles gives opposition defences a headache, and he adds speed to an already pacey side, which is very lethal on the counter-attack.

Tottenham Hotspur will undoubtedly look to control possession, like they did against West Ham United, which is preferred by Antonio Conte. The 3-4-2-1 formation is incredibly hard to break down and Conte tries to drill positional awareness into his players in every training session. Spurs did not look at their organized best against the Hammers, and Marco Silva will be hoping for something similar on Saturday.

Fulham will look to defend stoutly and try to hurt Spurs on the counter when they commit men forward. The speed of Fulham wingers and midfielders combined with Aleksandr Mitrovic’s prolific finishing is a lethal combination which has yielded fruit many times for the Cottagers this season. Their second goal against Brighton and Hove Albion came in a similar manner, after Mitrovic pinched the ball off Brighton, and the Cottagers broke forward in full glory with Kebano and Pereira combining until Lewis Dunk eventually deflected the Brazilian’s cross for an own goal. However, the rate at which they countered the Seagulls was impressive, and Marco Silva will undoubtedly be thinking of something along the same lines on Saturday.

The star player for Tottenham and England will once again be key for his team. Leading the line, he combined well with Heung-min Son and Dejan Kulusevski, and the trio are looking more lethal together as the games go by. With another decent display against West Ham on Wednesday night, Harry Kane will be expected to start and give Fulham’s defence a tough time on Saturday. He has been viewed as one of the world’s best strikers for quite some time now and with him, on the teamsheet, there is always a goal around the corner.

The Serbian is unquestionably Fulham’s go-to man. With 5 goals in 5 games, he has already overtaken his goal tally from Fulham’s last season in the Premier League and is the second top scorer, behind Erling Haaland.

Despite missing a crucial penalty against Wolves, Mitrovic always seems to be in the right place at the right time for this campaign, and he has made up for that mistake with 3 goals in 3 games since, including a last-minute winner against Brentford. The striker was on hand again on Wednesday night, finishing Kebano’s brilliant cross with a good finish, to give Fulham the lead. From his ability to hold the ball strongly and bring his teammates into the equation to scoring towering headers in the box, Silva has relied on Mitrovic to supply the goods.