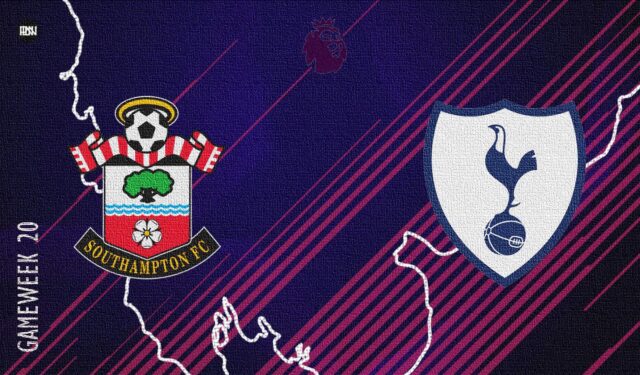 Southampton host Tottenham Hotspur in a quick turnaround for match-week 20, with both teams heading into the fixture on the back of impressive victories over the week. Keen on finding consistency in their bid to secure a top-four spot. Spurs will be hoping to increase their five-game unbeaten streak while the hosts will be looking to gain some consistency heading into a challenging set of fixtures over the festive period.

Having witnessed an optimistic change in results since Antonio Conte’s arrival, the Lilywhites will be hopeful in maintaining their pursuit for a Champions league until the end of the campaign. With the team brimming in confidence amidst key players delivering significant performances, Spurs will be keen on securing a comprehensive victory on Tuesday.

The hosts, meanwhile, will be keen on building upon their impressive victory against West Ham over the weekend. Southampton have only managed a victory and three draws in their last five fixtures, and remain amongst the team yet to find a consistent string of positive results in the ongoing campaign. Although facing an increasingly consistent Spurs side in match-week 20, the Saints will be hoping to cause an upset at the St. Mary’s later this evening.

All of Jack Stephens, Nathan Tella, and Lyanco are expected to remain out of contentions for Tuesday after the trio tested positive for Covid-19 ahead of last weekend’s fixture against West Ham. Additionally, Alex McCarthy remains sidelined due to injury, with Fraser Forster expected to retain his place between the sticks against Spurs.

Given the quick turnaround, the manager is likely to recall the likes of Che Adams and Adam Armstrong, among others, but will look to field the core players that saw the team clinch a crucial three points at the London Stadium.

With the exceptions of Cristian Romero and Ryan Sessegnon, Conte is likely to retain a core of his players for the game on Tuesday. Tanguy Ndombele, Steven Bergwijn, and Dele Alli could return to the starting line-up, given the need for rotation, however, the manager will be keen on retaining a core of his consistent players against Southampton.

Spurs are likely to field a strong starting XI and will be hoping to comfortably secure the three points on Tuesday. With the games coming thick and fast, Conte will be keen on maintaining the team’s remarkable run of results over the coming weeks.

Given Spurs’ boisterous displays, the Saints will be wary of any inadequacies on Tuesday. Ralph Hassenhuttl is likely to deploy a compact set-up in a bid to nullify Spurs’ dynamic threat up-front and will look to counter-press the opposition given their unpredictability in defence. Further, the hosts will look remain clinical in possession and will be keen on retaining possession when possible for most of the ninety minutes.

On the other hand, Conte is likely to stick with a semi-attacking approach that has seen him significantly improve the team’s results in recent weeks. Having tasted success in quick build-ups followed by clinical finishing, Spurs will be looking to dominate possession and create numerous chances throughout the ninety minutes. Additionally, Conte will look to nullify the impact of Southampton’s attacking full-backs, thereby, allowing his team to play higher up the pitch on Tuesday.

Having registered two goals and an assist in consecutive outings heading into Tuesday’s fixture, Ward-Prowse’s contribution will be pivotal to Southampton’s performance against Spurs. The midfielder continues being amongst the team’s most potent players across the pitch, and his creativity combined with his knack for goals will be critical to the hosts creating an adequate number of chances throughout the game.

Given Spurs compact midfield set-up, Ward=Prowse’s presence will be vital to Southampton retaining and making use of the possession on Tuesday. Moreover, given his ability on set-pieces, the visitors will be wary of conceding poor fouls in and around the penalty box later this evening.

The team’s highest goal-scorer this season, Son’s presence will be key to Spurs unlocking the home side’s defensive compactness on Tuesday. The South-Korean’s ability in possession combined with his off-the-ball movement and intelligence will be critical in him finding himself on the end of goal-scoring opportunities later this evening.

With the club in need of maintaining their pursuit for top-four, Spurs will be reliant on Son to provide the necessary contributions over the coming weeks. Provided the hosts fail to contain the South-Korean’s impact, Son is capable of single-handedly producing a match-winning performance on Tuesday.

Can Spurs bounce back to winning ways vs Morecambe or will the Magic of the Cup prevail?