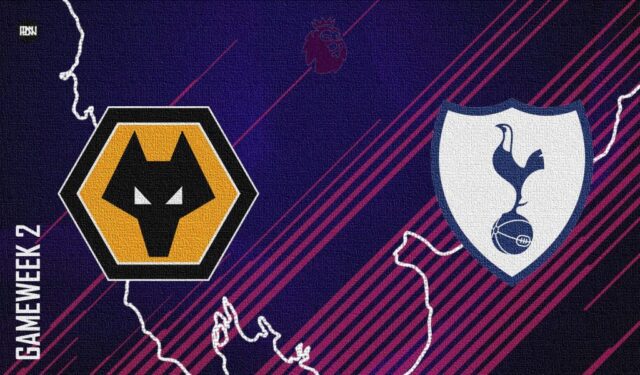 When Tottenham Hotspur travels to Molineux on Sunday to face Wolverhampton Wanderers, they will be hoping to make it two victories in a row to start the 2021-22 Premier League season. Spurs began their season with a 1-0 win over holders Manchester City last weekend, while Wolves lost 1-0 to Leicester City in their first match under new manager Bruno Lage.

Last weekend, Wolves gave a decent performance at the King Power Stadium, but a brilliant finish from Jamie Vardy late in the first half secured Leicester a crucial three points. Lage will now take his new team into their first home encounter of the season, hoping to make Nuno Espirito Santo’s homecoming to Molineux an uneasy one. Espirito Santo enjoyed a lot of success with the club before leaving at the end of the 2020-21 season, and the Portuguese was afterwards appointed Tottenham manager.

Tottenham, however, got off to a flawless start in the 2021-22 Premier League season on Sunday, defeating Man City 1-0 thanks to a second-half goal from Son Heung-min. Spurs are coming off a setback, having lost 1-0 to Pacos de Ferreira in the first leg of their Europa Conference League playoff encounter on Thursday, albeit it was a very different side from the one that stepped on the pitch last weekend, and there will be a slew of alterations at Molineux.

Nuno continues to field concerns about the future of a certain Harry Kane, but there’s a decent possibility the England captain will play on Sunday despite the ongoing talk about his future; Manchester City is still after his signing, but the transfer window clock is ticking.

Wolverhampton did not sustain any new injuries in their opening-weekend loss to Leicester, but they will be without the assistance of six first-team members for this encounter. Jonny, Willy Boly, Pedro Neto, Daniel Podence, Yerson Mosquera, and Hugo Bueno are all still out, which may well force Lage to pick an unaltered team for the Spurs match.

In the final third vs Leicester, the newly transferred Francesco Trincao partnered Raul Jimenez and Adama Traore, and that might be the scenario as well this weekend, with Ruben Neves and Joao Moutinho in central midfield. Max Kilman could return to the back three, although Nelson Semedo, Fabio Silva, and Leander Dendoncker are all vying for a place in the starting XI.

Nuno has revealed that he hasn’t finalized if Kane would play on Sunday, with the head coach expected to make a judgement call after a training session on Saturday. Owing to ailments, Joe Rodon and Cameron Carter-Vickers will miss the game, while Tanguy Ndombele will not play due to uncertainty about his future.

Nuno’s team is overall in great shape, and it wouldn’t be surprising whether the same starting XI from the Man City match returns for the second half. As a consequence, Kane’s likely return might be from the bench, with Son functioning in the centre and Lucas Moura and Steven Bergwijn in the wide areas for the North London club.

No Kane, No problem?

With the speculation surrounding his future, Harry Kane has not yet played a game for Tottenham this season. In fact, he only recently returned to Spurs’ training also for the first time this season. Even if he does leave, Spurs are left without a proper striker in their starting lineup.

However, up steps Son Heung-min. The South Korean had an almost perfect game last weekend against Manchester City playing as the main striker for the North London outfit. He was excellent on and off the ball and was involved in a lot of hold up play and chance creation that was earlier provided by Harry Kane. If he continues to play in a similar manner, the Spurs might as well not sign a striker and continue playing Son upfront.

Can Lage’s Wolves pick up their first-ever win this season?

Lage’s Wolves were defeated 1-0 by Leicester in their season opener last weekend, despite the fact that, like other teams, they did not have 100 per cent of their starting lineup available. Raul Jimenez, who had missed much of last season due to a head injury after leading the squad with 17 league goals the year before, did participate.

The Portuguese manager is still without a few key players like Jonny, Willy Boly, Pedro Neto & Daniel Podence. So managing a win with a weakened team at the moment looks difficult. However, both teams are playing under fresh systems and also, new managers. It is a match whose result can go both ways and if Lage can get this Wolves team to perform like his Benfica side with the players at his disposal, there’s a high chance for a 2019/20 Wolves resurgence which eventually led them to European qualification.

If Raul Jimenez gets back to his pre-injury form, Wolves can really be a force to be reckoned with this season. He has the support of Francesco Trincao along with Adama Traore which is similar to how he played along with Diogo Jota when he had his best Premier League season.

Raul Jimenez has made an incredible 47 goal contribution in 84 Premier League matches, including 30 goals, and has played a key role in the Wolves’ two victorious seasons. Only three forwards for their respective clubs have greater goal involvements or a better goal involvement % in the 2019/20 season. Jiménez has a goal-to-assist ratio of 47 per cent for the Wolves.

Son Heung-Min, playing out of position, as a striker, was excellent against the 1-0 win against Manchester City in Spurs’ opening game last weekend. Spurs’ no. 7 was excellent last time out and has been pretty consistent for the past few seasons.

With Harry Kane vying for an exit this summer, Son is surely set to become the North London club’s, main man. In terms of attacking duty, Son will have to shoulder the load for the entire squad. Due to Kane’s absence for the Lilywhites, it will be his role to make runs in the box, create chances, run into spaces, and now also score goals.