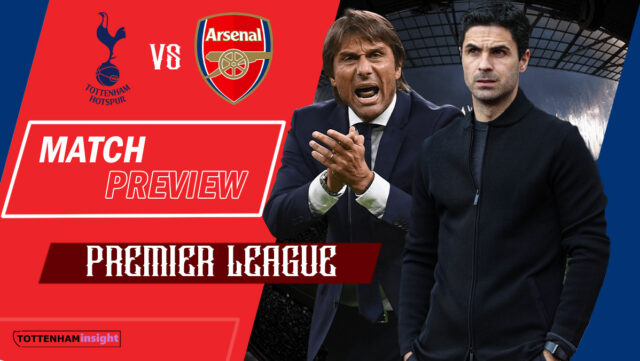 Arguably the biggest North London derby takes place on Thursday evening as Spurs play host to Arsenal at the Tottenham Hotspur stadium in what is a crucial top four battle.

The Gunners start the day one place and four points better off than their opponents, whose Champions League dreams will be shattered with defeat on their own turf and if Chelsea gets the better of Leeds United.

Much to the amusement of Arsenal faithful and the annoyance of Spurs, the Gunners’ depleted squad through injuries, the Africa Cup of Nations and COVID-19 led to the postponement of the originally scheduled North London derby on Spurs’ turf, and the Lilywhites have numerously made their feelings known on the matter.

However, Antonio Conte’s side arguably prepare to welcome the Gunners to their home in a better position than they were four months ago, with the club’s January arrivals flourishing, playing with real Premier League know-how and the confidence in the camp slowly building up again.

While dissatisfactory results in April having harmed their top-four charge, Tottenham got right back on track by beating Leicester City before managing to end Liverpool’s 12-game Premier League winning run at Anfield – only conceding to a deflected Luis Diaz effort after Son Heung-min’s well-worked opener.

Tottenham have kept their top-four dreams alive and will finish fifth at the very worst but they must get a win if they are indeed to overtake their fiercest rivals. Any result below a win, and Arteta’s men will be in the ascendancy to finish in that coveted Champions League spot.

Conte may be slightly concerned at the fact that his side have only managed to keep one clean sheet in their last seven Premier League matches at home – shipping one goal in each of their last four – and the Italian does not have too many fond memories of meetings with Arsenal, posting just one win from eight against them as manager.

Securing Champions League football at the Tottenham Hotspur Stadium may have quite the same ring to it as winning the league at White Hart Lane, but such an achievement would mark a momentous period of progress for Mikel Arteta’s Arsenal, and they are only 90 minutes away from doing so, especially as it’s on the eve of the Spaniard being rewarded with a new deal at the Emirates.

A three-game losing run over the Easter period threatened to derail their European ambitions entirely, but responding with four consecutive wins over Chelsea, Manchester United, West Ham United and Leeds United leaves the Gunners’ top-four destiny in their own hands heading into the final straight.

Being in such a crucial and momentous period requires constant wins on the board, no matter the performance and the Gunners have registered them with admirable street-smartness and fire in their bellies, something you would not have linked with them in recent seasons.

The Gunners made their 2-1 success over Leeds much nervier than it should have been after Eddie Nketiah’s superb 10-minute brace and Luke Ayling’s red card, but they eventually got over the line and will confirm a Champions League place for the first time since finishing second in 2015-16 with victory on Thursday.

Even if Arteta’s side slumps to defeat, they will still be in the driving seat before potential banana skins with Newcastle United and Everton, and failure to keep a cleansheet in seven Premier League matches is not a reassuring statistic before meeting Tottenham’s bright attacking trio.

A first-half flurry saw Arsenal storm to a 3-1 win over Nuno Espirito Santo’s team back in September, but Spurs have a formula for success on their own turf, unbeaten in seven home games against their North London rivals and cannot afford to let that impressive streak end if they are to keep their CL hopes alive.

Barring injuries to Sergio Reguillon, Matt Doherty, Japhet Tanganga, and Oliver Skipp, Tottenham should be well-stocked for the North London derby on Thursday.

At this point, Conte’s XI picks itself, with Ryan Sessegnon and Emerson Royal holding the fort in their wing-back roles and Ben Davies continuing in the three-man rearguard after a man-of-the-match performance at Anfield.

Harry Kane heads into Thursday’s battle aiming to build on a derby record of 11 strikes in 16 games against the Gunners, although he has now failed to score in back-to-back North London clashes.

As for Arsenal, defender Ben White has now missed the club’s last two matches with a tight hamstring, but Arteta is hopeful that the 24-year-old will shake off the issue in time to make himself available for Thursday.

Arteta also played down fears of an injury for Bukayo Saka at the weekend, but Thomas Partey and Kieran Tierney will watch on from the sidelines, with Takehiro Tomiyasu likely deputising for the latter on the left once again.

It will certainly be intriguing to see how Antonio Conte approaches this game seeing as his men can’t afford to come away from this game with anything less than a victory.

Again, the Italian coach will be heavily reliant on his cohesive and terrifying front three of Son Heung-Min, Harry Kane and Dejan Kulusevski. Do Spurs go for the jugular from the off and force Arsenal into some nervy early errors or do they keep the same style as they did at Anfield where they defending with such Conte-like spirit and doggedness against a relentless Liverpool machine?

The former Inter Milan coach and his players can take a lot of confidence and heart from that performance on Merseyside, and could well have taken all three points had they made the most of promising counter-attacking opportunities. Jurgen Klopp criticised Spurs for their approach to the game, but Conte could play the cards he’s dealt, and more importantly, it is a system that has won him numerous titles in Italy and England so Klopp could have no complaints.

Conte’s XI will indeed pick itself, with Ryan Sessegnon and Emerson Royal holding the fort in their favoured wing-back roles and Ben Davies continuing in the three-man rearguard after a man-of-the-match performance at Anfield. Pierre-Emile Hojbjerg will keep his place alongside the brilliant and metronomic Rodrigo Bentancur in midfield.

Royal was superb against Liverpool at the weekend, providing a lot of width and power from that right flank as Andy Robertson struggled to keep tabs with him. He will be looking to carry that form forward against Arsenal, and will again be key to their chances in attack.

As for Arsenal, Mikel Arteta’s men cannot afford to drop off like they did in the second half against Leeds United on Sunday or else Spurs could punish them with ease. The Whites were allowed an opportunity back in the game due to complacency creeping into the Gunners’ game. That can’t happen against Conte’s side, even if Arsenal can afford to draw or lose this game.

Win, and they are back playing Champions League football for the first time since the 2016/17 campaign, and what a way to do it at your fiercest rival’s home ground.

Don’t be surprised to see Arteta deploy the same three-at-the-back system he showcased in the impressive win over Chelsea at Stamford Bridge a few weeks ago. It was a system that aimed to match Tuchel’s own shape and intensity and Arsenal flourished as a result. Come kick-off on Thursday, Arteta will be inclined to try that system again and counter the threat Spurs pose on the flanks. Again, it will be a huge battle for both Cedric and Tomiyasu.

PLAYERS TO WATCH OUT FOR

20 Premier League goals in 32 games make for sensational reading and the South Korean superstar is in the spectacular form right now scoring ten goals and providing two more in as many games for the Lilywhites.

Son Heung-min is without a doubt, one of the English top flight’s most gifted and most consistent foreign imports in recent memory and his record for the club so far represents such.

It is also amazing to read that non of his 20 goals have arisen from the penalty spot meaning he is arguably the league’s most devastating finisher, and yes Mohammed Salah may have much to say about that but even the Egyptian isn’t the same vein of form as the former Bayer Leverkusen man.

Again, the 29-year-old will be absolutely crucial to Spurs’ chances in this game, and it is one they cannot afford to lose. This is a player who deserves the spotlight that the UEFA Champions League brings, so he will of course be at the top of his game come kick off on Thursday evening.

Arsenal should be very wary.

Eddie Nketiah may have got Arsenal’s two crucial goals on Sunday, but it was Gabriel Martinelli who was arguably Arsenal’s best player on the pitch.

The Brazilian youngster terrorized Leeds United right-back Luke Ayling so much that the Whites defender got himself sent off, relieving the burden of having to deal with a 20-year-old.

It was indeed an atrocious challenge on Martinelli, but the forward didn’t give up, he kept going, kept forming chances and the assist for Nketiah’s second was sensational, getting by two of his markers before picking out the striker with stunning ease.

He hasn’t found the back of the net since early March, but he once again proved just how vital he is to Arsenal, providing them with the tireless energy, unpredictability on the flanks and the work-rate that makes the Gunners’ attack play so effective.

How the Brazilian would love to score the winning goal that sends Arsenal to the Champions League promised land next season, that opportunity will be knocking on Thursday evening.