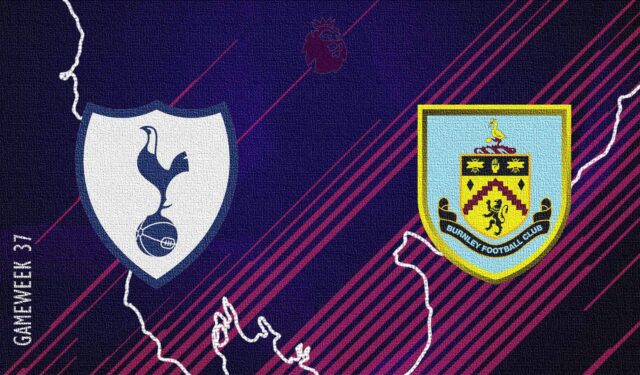 Tottenham Hotspur continues their pursuit of a Champions League spot after a comfortable victory in the North London Derby against Arsenal. Spurs will host 17th positioned Burnley in their penultimate match in the Premier League.

Tottenham are heading into this match having won against their local rivals keeping their top-4 hopes alive. Antonio Conte’s side has now cut the gap to Arsenal with just one point, their Champions League destiny is still out of their own hands and they would not want to hand over that spot to the Gunners. In their final two matches in the Premier League, the Lillywhites would certainly want to win six out of six points. Defender Cristian Romero will miss the final two games of the season after sustaining a hip injury.

Burnley are desperate for points to avoid joining the relegated teams. Caretaker boss Mike Jackson has been named April’s Manager of the Month after making history with the club. The interim head coach became the first Burnley manager to go unbeaten in his first four top-flight matches and he would hope to regain his winning form. His side is reeling from a 3-1 loss to Aston Villa.

This match proves to be a crucial game for Spurs as they would aim to make it to the top four and Burnley would try to up themselves in the table. Regardless, Burnley are going to be watching anxiously when the Elland Road club plays Brighton a little later on Sunday.

Harry Kane scored a brace against rivals Arsenal which included him scoring from the spot and a back-post header. He has been involved in 11 goals in 11 appearances against Burnley, scoring eight and setting up three and he would certainly hope to put his name on the sheet once again.

He started the season seeking a move away from Tottenham but with him sticking to the squad and enjoying a rather decent season with the club, Spurs might retain his services and renew his contract. Tottenham can go ahead of Arsenal if they win against Burnley on Sunday and Harry Kane would be the one to look out for.