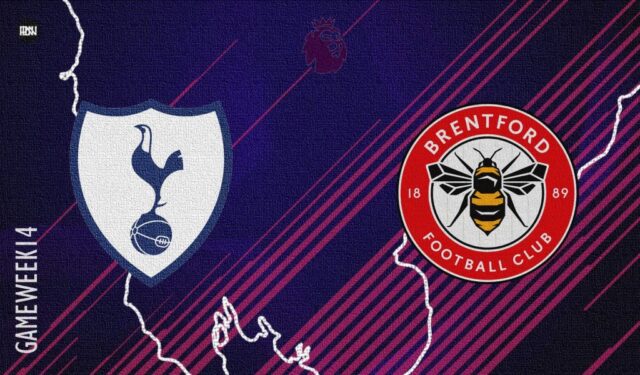 The tricky winter schedule is here. Brentford will visit Tottenham Hotspur stadium to face Spurs after snatching a narrow win against the struggling and injury-prone Everton. The Lilywhites on the other hand had their game postponed due to heavy snow at Turf Moor. Antonio Conte would have wanted to play that game as the schedule gets tighter with the North London team still competing in all competition. The newly-promoted side will look to keep playing positive football despite having a tricky season so far. Brentford are placed 12th with 7 points above the relegation zone.

Tottenham’s Argentinian duo Christain Romero & Giovani Lo Celso are still injured making life difficult for Conte who is still struggling to find his starting XI. Sanchez who has been one of the better defender until the NS Mura game will hope to start against Brentford. Doherty, Alli, and Ndombele are supposed to be on the bench following the embarrassment in Slovenia.

Thomas Frank will be without David Raya their experienced keeper who is expected to make his return in the month of February. Alvaro Fernandez will start in goal after his first clean sheet for the Bees in Premier League. With Kristoffer Ajer and Jorgensen expected to return in the first week of December, the defence will be tested against powerful Spurs forwards. Yoane Wissa’s return against Everton will be a big positive for the south London team.

The Italian is still looking for answers while trying to understand and analyze his squad. Oliver Skipp has been one of few players who has received a lot of liking from the manager. With Conte having a love for homegrown talents, he will hope to be a key part of Antonio Conte’s midfield. Hojbjerg will hope to start after coming off the bench against NS Mura. Reguilon and Emerson will be back in the side who are naturally better offensively on the ball than the options Conte has. Emerson who was very poor defensively against Leeds United will have to work hard and play on both sides of the field. Moura will deservingly replace Alli to provide that extra offensive runs and to create space for both the strikers up top. Antonio Conte will be hoping that the Kane-Son duo gets back to scoring as they both have struggled until now. The Boss will love to see how the team responds against a very tricky Brentford side.

Brentford manager Thomas Frank was delighted with the 3 points against Everton but was quick to point out that the team lost momentum in the second half with the Merseyside having 14 shots in the match. With both centre-back options injured, Frank will have Jansson, Pinnock, and Goode at the back. Defence has been an issue for the Bees as they have only kept one clean sheet in 9 matches. It will be a great challenge for Frank’s side to contain the Tottenham duo who are looking to get back in form. Ivan Toney has been their best player with 4 goals and 2 assists. Wissa will also hope to start after coming back from injury. The Bees will not have it easy against a resilient North London side.

Players to watch out for

Tottenham has always been reliant on Heung-Min Son to perform on big stages. The South Korean striker has had an underwhelming start to the Premier League campaign with only four goals & one assist to his tally. The change in manager from Mourinho to Nuno to Conte has an effect on his playing style. With Brentford missing some key defensive players, Conte will be hoping that Son finds his touch. With a deeper role like that of Eden hazard in Antonio Conte’s Chelsea side, Son will play by finding space and attracting defenders. He will be hoping to add goals to his tally to improve and impress the new manager.

The Northampton-born striker is the man in form for the Bees after having an incredible Championship last season with 31 goals and 10 assists. He has been their top scorer with 4 goals & 2 assist with starting every game for them. He will be looking to take advantage of unorganized Tottenham side and to create an impact with his pace.

Can Spurs bounce back to winning ways vs Morecambe or will the Magic of the Cup prevail?