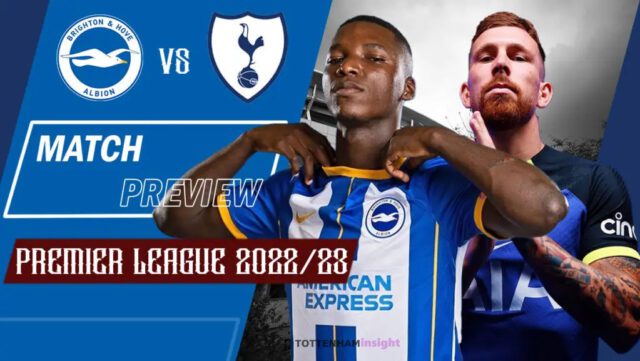 In the battle of the top 4 teams, Brighton & Hove Albion and Tottenham Hotspur face off at the Amex as both teams are separated only by 3 points. De Zerbi’s men are upbeat after coming off a thundering display at Anfield in their 3-3 draw where they were the better team for the major stretches of the match. Spurs are coming off a derby defeat against Arsenal last weekend and a dull draw against Eintracht Frankfurt in the Champions League.

It promises to be an interesting match as a 2-0 win for Brighton will take them to third place just 4 points behind leaders Arsenal with a match in hand. A win for Spurs will give them a 6-point lead over 4th place Brighton and put them in pole position for consolidating the 3rd place. Can Brighton get their first win of the De Zerbi era at their home ground or will Spurs look to get back on track in the title race by giving the Seagulls their first home defeat of the season?

Brighton will have the same squad from last weekend’s win draw at Anfield with Mwepu doubtful with fever and Moder ruled out till February 2023. De Zerbi will likely go with an unchanged lineup as they were often the better side against Jurgen Klopp’s men

Tottenham will still be without their injured forwards Dejan Kulusevski and Lucas Moura, with the Swedish out with a muscle injury and the latter out with an Achilles Tendon injury. Emerson is suspended for this fixture due to his red card against their London rivals. Ben Davies was back in the squad in their midweek Champions League match against Frankfurt but will be expected to come off the bench again to build match fitness.

Brighton were near perfect in their last outing against Liverpool and could have even won the match if not for Allison’s superb performance between the posts. De Zerbi’s men were set up perfectly to counter-press, winning possession in the final third often and their first two goals at Anfield came from winning second balls in Liverpool’s final third. They can also build up play patiently, baiting and progressing with speed, but need to be vary of Spurs’ threat on the counter. Brighton must therefore pin Spurs deep to minimise their transition threat.

As Arsenal showed, it is possible to exploit the spaces between Spurs’ midfield and defensive line by spreading the ball wide and creating 2v1 for wingers on the touchline. This left gaps in the halfspace which Arteta’s men duly exploited as the inverted fullbacks found space and time to pick out passes.

Spurs will find joy in the wings as Liverpool’s third goal showed there were spaces in behind the wingbacks for the wide men to exploit on the counter. Son and Kane must find their shooting boots as they have often gotten into good positions but lacked the killer touch to convert them into chances.

Tottenham will also look to push one of their CBs to carry the ball forward as Matip did against Brighton last weekend, creating space for their wide men. Wingbacks will be key for Spurs to shut down March and Estupinan as both the teams will likely be matched man to man in the same formation. With Emerson missing out and Conte not trusting Spence, Perisic will likely be shifted to the right with Sessegnon taking his place on the left side.

Welbeck was at the heart of Brighton’s attack against Liverpool even though Trossard took all the plaudits. He set up Trossard for the first goal with a backheel and won the ball back from Trent Alexander Arnold in the final third before setting up March, who duly placed the ball for Trossard to finish for the second goal. He should have also scored a goal on his own in the first half but he placed his header directly at Allison. Welbeck showed an increase in touches inside the opposition box in the last match in addition to the link-up play he had been doing under Potter. It is only a matter of time before Welbeck gets himself on the scoresheet.

Kane has been Spurs’ talisman for years and he will continue to do so. Spurs were a bit off against Frankfurt but Kane did have chances to convert in their first half. Though Spurs lost their last match against Arsenal, Harry Kane was a bright spot and converted their penalty expertly. He’ll be crucial again as he can set up Son and Richarlison by dropping deep and also run behind when there are spaces to be exploited. His telepathic relationship with Son will be key as Spurs look to set aside the concerns of their fans to get back on track.