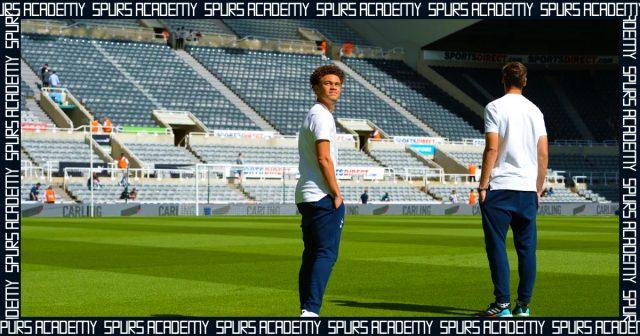 Spurs have a reputation for developing young players and, with the likes of Harry Kane and Harry Winks having established themselves as first-team regulars over the last five years, fans are understandably excited to see the next generation of stars emerge from the Enfield Training Centre.

However, with Jose Mourinho at the helm, youth players are less likely to be given a chance to shine in the top flight, and the Portuguese boss must decide which future prospects he wishes to keep at the club ahead of next season. Both Luke Amos and Oliver Skipp operate in the center of the park and, with plenty of competition for places and the return of Moussa Sissoko, the talented duo may see their first team opportunities limited over the next twelve months. We look at whether the pair should remain in North London, or potentially seek opportunities elsewhere.

Amos is currently out on loan for the third time in his career, and the 23-year old has certainly benefited from his spells in League Two and the Championship. He was hailed as ‘an excellent young professional’ by then-Stevenage boss Darren Sarrl, and he managed to find the net twice during his time in Hertfordshire.

Despite the 23-year old earning plenty of plaudits for his performances on Spurs’ pre-season tour of the United States, he wasn’t able to force his way into the first-team picture, and was sent out on loan to QPR at the beginning of the 2019-20 campaign. Many fans believe that the former youth team star has been unlucky with an untimely ACL injury hindering his development in North London. However, his latest loan spell appears to have given him the chance to make up for lost time.

His standout performance of the campaign arrived against relegation-threatened Barnsley in December and, despite Mark Warburton’s side eventually losing 5-3, the loanee managed to bag a brace, scoring with his only two shots of the game. Inspired by N’Golo Kante, Amos often goes unnoticed throughout the 90 minutes, however, he plays a very important role, and he rarely loses possession. He describes himself as a ‘box-to-box defensive-minded player’, and his all-round game has certainly matured over the last couple of seasons.

With Eric Dier set to extend his contract in North London, the former Southend loanee may struggle to get a run of games next season, and another loan spell surely beckons. However, the midfielder is approaching his mid-20s, and although there is still time for him to break through, he may opt to put down roots elsewhere. His contract expires next summer, and if Spurs aren’t able to provide him with the opportunity to impress in the Premier League anytime soon, the pair are likely to part ways.

Whilst Amos has been sent out on loan this season, Skipp has remained at the Tottenham Hotspur Stadium, and has played 55 minutes of top-flight football so far. The 19-year old was the beneficiary of Mourinho’s reported bust-up with Tanguy Ndombele and, with the Frenchman rumored to be leaving the club this summer, it could potentially clear the way for the Welwyn Garden City-born star to make his mark.

However, with the top six still a possibility, the former Manchester United boss may opt to use him sparingly for the time being. As of July 4th, the club are 8/1 with Betway to secure a top-six finish this season and, with tough games against Arsenal, on-form Newcastle, and Crystal Palace on the horizon, Skipp may have to settle for a place on the bench throughout the remainder of the 2019-20 campaign. He was amongst the subs for the Spurs’ midweek defeat to Sheffield United with Giovani Lo Celso and Moussa Sissoko starting the game in central midfield.

Skipp’s style of play has drawn comparisons to teammate Harry Winks, with both players adept at screening the defense. Although the England international has been accused of being knocked off the ball too easily, Skipp does have the ability to use his body effectively when battling for possession in central areas. His decision making is second to none, although his lack of adventure in the final third is arguably his one area of weakness.

Spurs will surely opt to strengthen in the Premier League’s transfer window and, although central midfield is unlikely to be addressed this summer, Daniel Levy may wish to reduce the wage bill before any signings are confirmed. Skipp is three years younger than his peer, and already appears to be ahead of Amos in the pecking order. The England Under-21 international is likely to remain at the club for the foreseeable and, given the fact that they are yet to send him out on loan, it appears that he still has an important role to play.

Amos’ time at the club could be coming to an end and, despite favorable reports from EFL clubs, he may struggle to usurp the likes of Sissoko and Winks anytime soon. The North Londoner’s future may lie elsewhere, and it could be beneficial to both parties to sell him to a Championship club this summer.