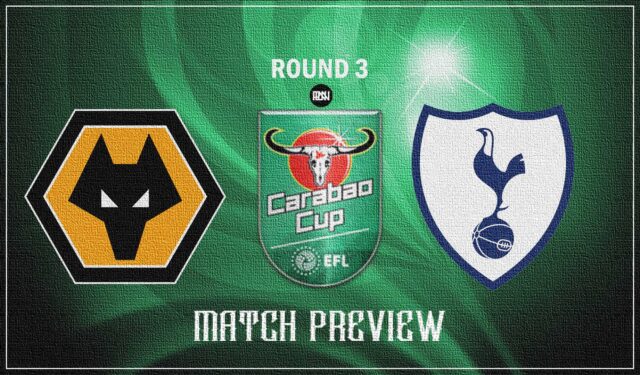 The Premier League is well and truly underway now, and with a fair amount of games played in the league, it is time for all teams to turn their attention towards the domestic cup competitions. This week the Third Round of the Carabao Cup kicks off, as it brings a welcome distraction from the pressure of the Premier League. Two established PL clubs face off in the third round in the midweek, with Tottenham Hotspur making the trip to the Midlands to face Wolverhampton Wanderers at the Molineux.

Wolverhampton Wanderers had a poor game at home against a resolute Brentford defense, and although the hosts controlled possession, the visitors took their opportunities whenever they came and won 2-0, despite being a man down for almost 30 minutes. Ivan Toney scored one and assisted one for Brentford, as doubts started to appear about the appointment of new Wolves manager Bruno Lage. The attacking trio of Trincao, Jimenez, and Adama Traore failed to make any impact on Saturday, as Wolves fell to their 4th defeat in 5 games. They will need a big effort if they have to defeat a Spurs side, who also come to the Molineux on the back of two successive league defeats. The two sides played out an edgy game in the league just a few weeks back, as Spurs went home with all three points thanks to a Dele Alli penalty just 10 minutes into the game.

Tottenham Hotspur will come into the game on the back of a home loss against long-time rivals Chelsea on Sunday in the London derby. They were outplayed for large parts of the game as they fell to a 3-0 defeat thanks to goals from Thiago Silva, Ngolo Kante, and Antonio Rudiger. Spurs were off to a good and energetic start, but the European champions grew into the game and eventually ran out as the deserved winners. Spurs manager Nuno Espirito Santo had named an attacking lineup, in contrast to his usual pragmatic style of play, but the team failed to make a huge impact as they finished the game with only 2 shots on target against their city rivals. He will be hoping for a much better reaction against his old club.

Wolverhampton Wanderers will be without two first-team players in defender Jonny Otto and forward Pedro Neto, who are long-term absentees with knee injuries. Goalkeeper John Ruddy will be expected to start as the preferred cup goalkeeper. Other than that manager Bruno Lage has a fit squad and will be expected to rotate from the Brentford game.

Tottenham Hotspur will welcome back defender Japhet Tanganga to the squad, as he returns after serving his one-game ban. However, attackers Steven Bergwijn and Lucas Moura are expected to miss the trip to Molineux with ankle injuries. Davinson Sanchez featured from the bench against Chelsea after finishing his quarantine period and will be expected to start against Wolves on Wednesday.

Defensive the way to go for Nuno?

Against Chelsea, Nuno Espirito Santo surprised perhaps everyone by naming an attacking lineup, Tanguy Ndombele, Dele Alli, Giovanni Lo Celso, Heung Min-Son, and Harry Kane all starting. However, despite having an energetic start, they fell off a while later and Chelsea were able to easily pick the Spurs defense apart. But, for all their attacking selections, Spurs were not able to create much of an impact on the Chelsea goal, and they were eventually condemned to their second league defeat of the season. The lineup was a far cry from the first 3 lineups that Nuno procured in the league, and in each of those three games, Spurs were pragmatic and weathered the opposition attacking storm, and took their opportunity as and when it came to winning. They kept 3 clean sheets in the first 3 games, and even beat title favourites and defending champions Manchester City on an opening day.

This begs the question that should Nuno keep his pragmatic style of play and get results for Spurs, or should he throw caution to the wind, and treat his fans to an exciting style of play, while having no guarantee of a win? Nuno’s biggest strength remains his defense, and it was evidenced by his time at Wolves and now so far at Spurs. Perhaps Sunday’s defeat could have served as a reminder to the Portuguese manager and with cup competitions representing Spurs’ biggest chance of winning silverware in a long time, he will be cautious in straying far from his path of defensive approach to games.

Can Bruno Lage afford to rotate?

This season has been new territory for the Wolves, after losing their manager Nuno Espirito Santos and replacing him with Bruno Lage. The replacement has not gone their way so far, with the club losing four out of five league games. Admittedly, it will take time for the new manager to settle in, and like Spurs, cup games represent their best chance of any silverware. Their aim will be to go as deep as they can into cup competitions, and it will be interesting to see if Lage, based on results so far, can afford to rotate too much of his team. The Premier League is a grueling league, and key players will need to rest with almost a full season yet to go. If the Portuguese feel cup competitions are a priority, vital senior players like Raul Jimenez, Ruben Neves, Joao Moutinho will need to feature heavily.

The ever-present midfielder in the Wolves side is a very crucial player to their team. Reports suggested that the Portuguese came close to leaving the Molineux this summer, but stayed for the time being. With a host of top clubs vying for his signature, he shows exactly why that is every time he steps onto the pitch. Playing as a central midfielder, his job is to dictate the play, and his outstanding vision allows him to pick out any run behind the opposition defense. He controls the tempo of the play for Wolves, and his long-range shots are a sight to behold. Neves has, on many occasions, bailed out Wolves with his wonderful goals from outside the box, and against bigger and superior teams like Spurs, he will be looking to do that again. Spurs manager Nuno Espirito Santo will be well aware of his capabilities, having coached him for 4 seasons. The visitors should be careful of affording the Portuguese midfielder any type of space in and around the box, as Neves can make them pay dearly for any mistakes committed by Spurs.

The highly-rated summer arrival from Spain to replace Erik Lamela has not really kicked off yet and needs some more game time to truly show his class. He is young, exciting, and arrives from La Liga after showing a lot of promise. Described as a fearless and old-school winger, he is expected to fit right into the English football scene, with all its physical glory. Gil is fast and is an astute passer of the ball, and has the ability to work his way out of tight spaces. He will be expected to start in cup competitions, allowing him to truly express himself and show why Spurs paid £21 million and Lamela for his services. If in form, he can be the main creative outlet for Spurs, relieving some pressure off the shoulders of Harry Kane and Heung-Min Son, and has the potential to form a devastating partnership with those two world-beaters.