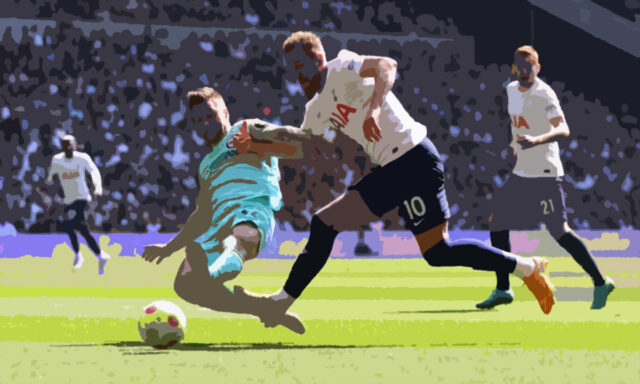 2021-22 Premier League season has many positional races on the table. The top of the league standings has involved Manchester City and Liverpool for the longest time. With Chelsea firmly cemented in the third spot, the race for the fourth and final spot in the upper echelon has been heated for the past few months.

Tottenham Hotspur has been one of the teams that have been firmly in the top-four race this season. Harry Kane and Son Heung-min have been the usual stars for Spurs and they have been stellar this season with double-digit goals and a solid amount of assists as well. The quality of their supporting cast has been spotty at times which has led to some struggles.

With their latest loss to Brighton on Matchweek 33, Spurs dealt a huge blow to their top-four chances. They were just coming off a four-match winning streak but that was snapped by Brighton. They still hold the fourth spot in the Premier League but that is in jeopardy seeing that two teams are hot on their trail.

You can look at different factors that will play into knowing the matchups. Look at the Manchester United lineup or the Arsenal sponsor which will help in their argument for the top four as well due to the funds they bring that the club spends. Let’s look into the implications of the top-four race, especially when Tottenham is discussed.

The match against Brighton was Spurs’ chance to take a six-point lead over their closest adversaries but they failed in their attempt. Widening their lead was supposed to be an easy task according to the odds but Brighton pulled off a surprising result highlighted by a 90th-minute goal from Leandro Trossard.

The Red Devils are three points behind with the Reds from Manchester playing a game more. They will be a huge threat but it looks like Arsenal will be the bigger threat because they are level on points and we can expect that the Gunners will hit the ground running because they want to bounce back from their recent skid. They were the clear-cut favourite for the top four spot a few weeks ago but they hit a skid and the Spurs had a hot streak. The two North London clubs will most likely duke it out for the last spot in the top four and momentum is equal at the moment.

Spurs still have a tough schedule ahead

When you look at the Spurs’ upcoming schedule, you will see that they have tough games ahead. Three games stand out in their schedule with their games against Leicester City, title contenders Liverpool, and of course, the North London derby against Arsenal on the 12th of May.

Liverpool and Arsenal matches will surely be the most difficult of the season for Tottenham Hotspur. The former will be at Anfield, which is always a tough matchup since Jurgen Klopp’s squad is coached well and they are stacked with supremely-talented players.

Arsenal is also a huge matchup since it is one of the most heated rivalries in professional sports. The two North London squads will surely have an awesome match due to the talented players on both teams, however, you should also look at the stakes that will be in that match. You can just look at the Arsenal sponsor and see how much they are hyping this up because the match will surely be a huge event in the Premier League.

Spurs’ end to the season will be tougher than most teams in the Premier League. Expect that the top-four race will be heated because all three teams involved will do their best to secure a spot in the Champions League next season.