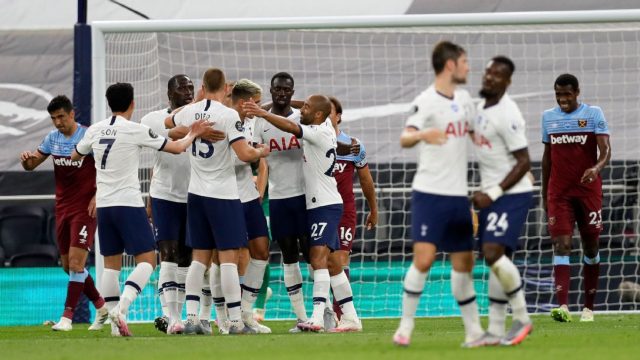 A London derby is on the cards for a Super Sunday clash at the London Stadium, where West Ham United host Tottenham Hotspur.

Spurs are on the back of an impressive 4-1 victory over the Austrian side, Wolfsberger, in the Europa League’s Round of 32.

Here’s my predicted XI for the game against West Ham:

The Frenchman has kept only 1 clean sheet in his last 10 games and has proved to be an error-prone keeper. However, Joe Hart is not a competent enough second-choice to replace Lloris between the sticks.

Doherty was dropped for last week’s massive clash against Pep Guardiola’s Manchester City, but he returned to the starting 11 in the mid-week Europa League clash. Given Aurier’s injury, I believe that Doherty should be given another opportunity to establish himself as a regular starter.

Alderweireld is probably Jose Mourinho’s most reliable defender. He fights for his side throughout the 90 minutes, and I believe that in pursuance of re-finding their form in the league, the Portuguese manager will start Alderweireld.

Dier and Davinson Sanchez have both proven to be unreliable options at the back. Yet, Dier is better on the ball, and if Mourinho expects his side to have more time on the ball, the Englishman would be the preferred choice.

Sergio Reguilón’s availability is unknown for the game against West Ham. He may be fit enough for the bench, but there’s no way he starts after a spell on the sidelines for over 4 weeks. Hence, Ben Davies is the obvious choice to start at left-back.

Having Hojbjerg in the starting eleven is crucial to Spurs’ defensive stability. His tenacious nature in midfield makes him an automatic. The former Southampton man was given a rest for the Europa League, so he should be restless to start vs West Ham.

When Tottenham are on the ball, Ndombele proves to be the most important catalyst to take the team forward. He too wasn’t included in the starting XI for the Wolfsberger game, so it’s likely he regains his place in the lineup.

This might come as a surprise to some, but Bale’s 60-minute showing in the Europa League should be enough to convince Mourinho. The Spurs manager even hinted that the Welshman could be part of the set-up for Sunday.

Lamela has been one of Spurs’ better player in recent tough times. His ability on the ball has been much needed in the absence of Giovani Lo Celso, who is out with an injury.

Son is Tottenham’s joint-top scorer this Premier League this season with Harry Kane. The duo form one of the best duos’s in England, and the South Korean’s pace and finishing ability are among the league’s best.

Kane opted out of the Europa League fixture against Wolfsberger after just recovering from his ankle injury. This should mean that he’s back to the starting XI against West Ham, a team who he scored twice against earlier this season.