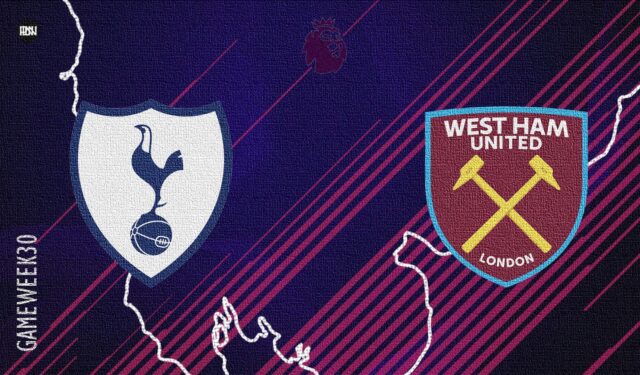 The Premier League weekend is back for one last time before a two-week international break, which starts from 21st March. The league tables is still too close to call, with just over 9 game weeks to go now, and the races for the title, top 4, and relegation are all heating up. This week sees two top 4 rivals go head-to-head, a result that could have huge ramifications for both teams come the end of the season. West Ham United travel north to take on their city rivals Tottenham Hotspur.

Tottenham Hotspur have been in mixed form of late, winning three and losing two of their last 5 games. They have put up some strong performances in the last few weeks, but have been susceptible to the odd collapse as we saw against Middlesbrough in the FA Cup and against Man United at Old Trafford last week. Antonio Conte has overseen some rejuvenation at Spurs since his arrival, as the Lilywhites have become genuine top 4 challengers after being off-pace for most of the season. They have been in a long battle with Man United, Arsenal, and West Ham United with all 4 clubs battling for the one and only Champions League spot for next season. Spurs were last in action against Brighton and Hove Albion in the midweek, away from home, as they put in another solid display to win 2-0 at the Amex Stadium. Conte will be hoping for a repeat of the same performance in what is set to be a huge clash on Sunday.

West Ham United were last in action against Spanish club Sevilla in the midweek in the Europa League Round of 16-second leg. The Londoners ran out 2-0 winners on the night, and 2-1 winners on aggregate as they recovered from a first leg 1-0 loss in Spain to win 2-0 at home on Thursday night. The game finished level in normal time and looked to be heading to penalties before Andriy Yarmolenko scored a well-taken goal in the 112th minute to give West Ham the lead and eventually the win. It was a gutsy performance from the Irons, as David Moyes’ men pushed Sevilla hard for the whole game. They now turn their attention towards another big game, with Sunday’s result guaranteed to affect their top 4 chances. The Hammers currently sit in 6th , level on points with Tottenham in 7th and 3 points behind 4th placed Arsenal.

Tottenham Hotspur will be without long-term absentees Japhet Tanganga, Oliver Skipp and Ryan Sessegnon again on Sunday. However, there is good news for Spurs fans with Antonio Conte set to have a very strong squad at his disposal. There are no more fresh injury concerns for the Lilywhites, and Conte will have many options to choose from for what is a crucial game. With Spurs playing in the midweek, the Italian coach will no doubt be looking to rotate his team, with injuries and fatigue in mind.

West Ham United will be without a key player in forward Jarrod Bowen. His heel problem has not fully recovered, meaning he will likely return only after the international break. The defensive duo of Angelo Ogbonna and Vladimir Coufal are also sidelined with long-term injuries and are set to be out for a while. West Ham have less than 72 hours to recover from their Thursday night win over Sevilla, and David Moyes will certainly look to freshen up his lineup on Sunday night. Nikola Vlasic could come back into the lineup on Sunday after being an unused sub in the midweek, providing the Irons with some fresh legs in the attack. Moyes also has the option of Issa Diop, Ryan Fredricks, and Arthur Masuaku in defense, as the Hammers will look to come away with maximum points to further their claim for a top 4 spot.

Spurs versus West Ham United is all set to be a crucial game, with both teams gunning for the 4th spot. West Ham United started the season better than Spurs, but a run of 3 defeats and 2 draws in the middle of the season saw the Hammers lose some ground. Tottenham on the other hand, changed managers with Antonio Conte replacing Nuno Espirito Santos after just a few games in charge, and the team took some time to settle to the Italian’s philosophy and style of play. However, with just a few more games to go in the league now, it seems the battle for the top 4 will go down to the wire.

West Ham United have had injury issues all season, especially in their defense. However, manager David Moyes seems to have found the right combination in his backline, and they have conceded fewer goals in the last 6 games. They face a brilliant Spurs attack, with the likes of Harry Kane, Dejan Kulusevski, and Heung-min Son all in form and ready to strike at any hint of weakness from the opposition. Declan Rice will have a huge role to play in the Irons’ midfield, shielding the defense and joining up in attack as well, against a Spurs side that has more numbers in the midfield. It will be tough for the West Ham midfield to control the ball, and they will have to be wary about being pressed down too quickly.

The Hammers will also have to be wary about Harry Kane and his tendency to drop into the midfield to create space for Son and Kulusevski. The Englishman used that skill to great effect in their win against Manchester City, and did that against Brighton in the midweek on a few occasions too. David Moyes knows he has to clamp down on the Spurs’ attack and not let them have too many opportunities in front of goal. It’s a very critical game for both clubs, with a win seeing Spurs leapfrog the visitors and Man United as well, into 5th.

The 29-year-old striker has hit form under Antonio Conte, scoring 15 goals in 26 appearances under the Italian, including 7 goals in the last 6 games. His performances have improved a lot more since the start of the season. Spurs attack has improved since the signing of Dejan Kulusevski, and he has added to the already lethal partnership of Harry Kane and Heung-min Son. He has been scoring goals for fun under Conte and has put in good shifts as he leads the Spurs attack. Harry Kane passed Wayne Rooney’s record of most away goals in the Premier League as he scored against Brighton and Hove Albion last time out to make it 95 goals to Rooney’s 94 goals. He will be the spearhead in the Spurs attack on a big night, and the West Ham United defence will have to cope with his terrific pace, clinical finishing and his wonderful passes.

The Jamaican forward started the season brilliantly, scoring 5 and assisting 3 in the first three league games of the season. However, he could not continue in the same momentum, scoring only 4 in the next 23 appearances. The West Ham striker is known for his physical play and clinical finishing, and manager David Moyes will be hoping his star man can hit form again. He scored the winner in the reverse fixture played at the London Stadium back in October, as West Ham held out to win the game 1-0. He was on hand to assist the opener against Sevilla in the midweek, as he played the full 120 minutes to see the Hammers through to the next round. The Spurs’ defense is shaky at times, and there could be an opportunity or two for the 31-year-old to grab a goal. The Hammers will need him to step up if they want maximum points on Sunday night.