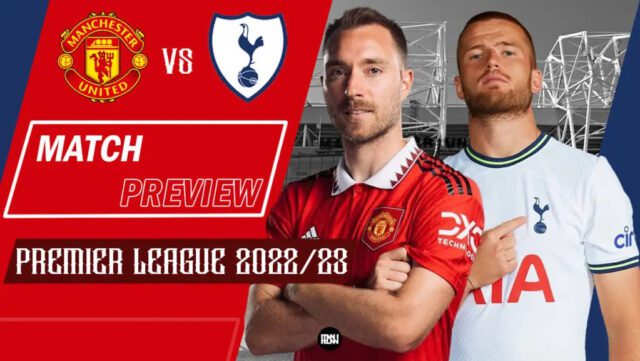 Premier League continues with some midweek action, and it is an English classic that takes place with Manchester United welcoming North Londoners Tottenham Hotspur to Old Trafford.

Man United’s season with new manager Erik ten Hag started in the worst possible way, losing the first two games including a humiliating 4-0 defeat to Brentford. However, the Dutchman and his boys responded in the best way possible, winning 5 out of the next 7 games. They were last in action against a solid and new-look Newcastle United team, who stood strong at Old Trafford and did not wilt under pressure. The Magpies held the Red Devils to a nil all draw and came away from Manchester with a hard-earned point. Ten Hag was disappointed with the result, but was satisfied with what he saw from his team on the pitch. United felt hard done by after two penalty appeals fell on deaf ears and replays showed that the home team’s appeals were valid.

A very important period in the calendar started for Man United with the game against Newcastle United. They now face Tottenham Hotspur at home and Chelsea away from home in the space of three days followed by the Europa League fixture next week along with a couple of tricky games against West Ham United and Aston Villa. The Red Devils will not have any time to dwell on their draw and instead will have to take the positives and turn their attention to Spurs on Wednesday.

Tottenham Hotspur continues their resurgence under Antonio Conte, sitting third in the table and level on points with Manchester City in 2nd. They are just four points behind North London rivals and league leaders Arsenal who seem very comfortable at the top. Spurs have been in fine form over the past few games, with their latest win coming against Frank Lampard’s Everton, winning 2-0 at home thanks to goals from Harry Kane and Pierre-Emile Hojbjerg. Despite the Toffees creating better chances, Spurs looked the better side and were far more comfortable in the second half and deserved the three points. That win made it three out of the last three games in all competitions for the Lilywhites as they remain unbeaten since their defeat in the North London Derby. Antonio Conte was very happy with his side’s efforts and display and said he was ’proud’ of how his players performed. He will hope for another dominating performance on Wednesday at Old Trafford.

Manchester United were without midfield maestro and former Spurs ace Christian Eriksen over the weekend, with the Dane taking ill. Erik ten Hag was unsure but hopeful of having the midfielder available for the midweek clash in his post-match interview after the draw against Newcastle United at home. Striker Anthony Martial was said to be in contention to make the squad on Sunday, but missed out and will face a late fitness test before Wednesday night. Scott McTominay was suspended last weekend, but will return to the squad and it remains to see if he can displace Casemiro with the Brazilian putting in an impressive display against Newcastle. Marcus Rashford came off the bench and almost grabbed a winner for the Red Devils, but will be expected to start against Spurs. Harry Maguire is expected to miss out with the injury suffered while on international duty.

Tottenham Hotspur were forced into a substitution against Everton, with Brazilian forward Richarlison going off with a calf injury. The injury was revealed to be not as serious as thought before, and the former Everton man is expected to face only upto two weeks on the sidelines. Dejan Kulusevski has also been ruled out of Wednesday’s trip to Manchester, with Lucas Moura possibly replacing him. Conte confirmed Moura is available for selection, but said he was working to regain full match fitness. There are no other major injury concerns for Spurs as of now.

Manchester United’s draw against Newcastle United was seen as two points dropped rather than one point gained, with the Red Devils expected to win against the Magpies. However, to most fans and observers, that game was evidence of the clear progress that the team has been making under Erik ten Hag. For years, smaller teams have defended against the Mancunians with a low block as United were aimless in possession and were not able to create much. Newcastle United were somewhat similar as they defended deep for large parts of the game and were hoping to catch out the hosts on the break. However, this time Man United were much more threatening on the ball. They were able to create chances, getting past the low block and not getting anxious when in possession. Even without the influential Christian Eriksen, United were able to eke out a few chances, albeit not as many as when he is on the pitch. The Red Devils should have come away with three points, but some dodgy officiating and a couple missed opportunities late on meant that the points were shared.

It is something that Spurs and Antonio Conte will have looked closely at. United’s development is clear to see and all signs point to them only getting stronger. On Wednesday, two brilliant tacticians will go head-to-head for the first time ever. Both have a clear philosophy they want to implement, and so far both are succeeding to some extent. Conte has a clear philosophy and he prefers playing in an organized way with lots of possession. His three-at-the-back defense ensures his team do not concede many chances, and ten Hag and his men will have to find their way around a staunch defense. The Lilywhites’ strong defense and midfield can get the ball out quickly to Harry Kane or Heung-min Son, and those two need no introduction, causing havoc in the Premier League with their devilish pace and clinical finishing.

Conte is currently a bit light in attack, with Dejan Kulusevski and Richarlison injured, but the Italian has hinted he will be sticking with the 3-4-3 formation come Wednesday night. However, the Lilywhites looked a stronger side against Everton when Yves Bissouma came on for Richarlison in the midfield of a 3-5-2 formation. Conte could be tempted to go with Bissouma again and will look to overpower United in the middle of the park.

Man United are a side struggling for goals at the moment. The Red Devils have only scored 13 goals in 9 game so far, with only Bournemouth scoring fewer goals than them in the top half of the table. Their attacking department has been hampered by constant injuries to Anthony Martial who has put in impressive shifts every time he has played. The front three look more fluid and confident with the Frenchman leading the line, but luck has not been on his side and has been plagued by various injuries so far. Marcus Rashford will be the obvious choice to be the number 9 in place of Martial with Cristiano Ronaldo struggling currently.

With a strong defense and a stumbling opposition defense, the odds are in Spurs’ favour, but United have risen up to the occasion many times this season and at Old Trafford with a buzzing Stretford End, the Red Devils can never be counted out.

Many had doubted the new signing Antony and what he could do after Erik ten Hag pushed for the winger and the move was completed for a £85 million. However, the Brazilian has put all doubts at rest with a tremendous impact at Old Trafford since his arrival, scoring in his first three Premier League games. The 22-year-old became the first Man United player in their long and illustrious history to score in each of his first three games. He has become one of the first names on the team sheet, and his skills mystify opposition defenders who are afraid of getting close to him for fear he will skip past them. He has formed a great partnership with Diogo Dalot on that right-flank, and he will once again be in the spotlight on Wednesday night, where he will have to deal with Ivan Perisic on the wing.

Having registered a goal from the penalty spot against Everton on Saturday, Harry Kane emerges as a key player against Man United. The English striker has been considered one of the best ever because of his all-round play and not just his goal-scoring exploits. He has exceptional vision and can pick out a run from deep. He can also hold the ball up quite well, starting the move and then will make a perfectly timed run into the box to finish off the move. Such is his ability on and off the ball that defenders are always wary when Kane is on the move. His calm penalty took his tally to 9 for the season, only behind Erling Haaland, who is on 15. The Englishman could have a decent time on Wednesday if United play a high line with lots of space to run into behind.