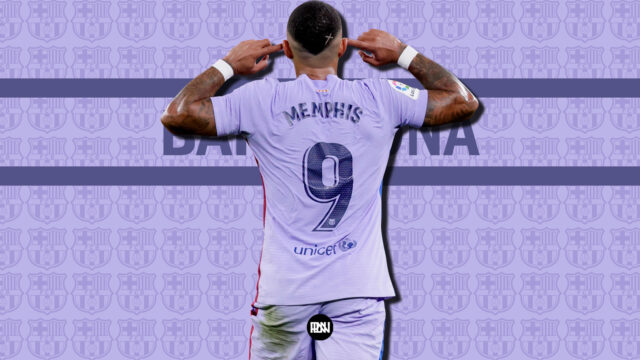 According to Gerard Romero, Tottenham Hotspur have sent an offer to FC Barcelona to secure the services of Memphis Depay in the upcoming summer transfer window.

Depay, 28, has arrived in Barcelona as a free agent from French side Olympique Lyonnais, signing a two-year deal with the Spanish giants. After enjoying a bright start to life as a Barcelona player, Memphis Depay has been on the sidelines owing to injuries and the arrival of Ferran Torres, Adama Traore, and Aubameyang in the January transfer window. The Dutch still has a respectable output of 10 goals and 2 assists in 2000 league and Champions League minutes.

So with the rumours circulating, is Depay really what the North London club need right now?

Tottenham Hotspur have had a pretty inconsistent season. After failing to get their primary targets for a manager last summer, The Lilywhites appointed former Wolves manager Nuno Espirito Santo. This appointment seemed to fail from the first instance as Spurs appointed a manager who historically did not fit the club ideology of playing attacking football and he was let go off after 17 matches and in came the former Chelsea boss Antonio Conte. Conte has somewhat managed to steady the ship at Spurs with wins over Manchester City and Leicester City and the North London club sit just three points behind rivals Arsenal.

Tottenham have been much improved under the former Inter Milan manager with shots going up from 10.3 to 16.1 and shots on target seeing an improvement from 4 to 6.4 per 90. Their end product in the final third has seen a massive uptick and Spurs in general look a good side under Conte than it ever under Nuno. But as Antonio has repeatedly said in the press conferences that he is not a magician and this Spurs side will need new players if they dream to play Champions League football on a regular basis.

The Italian has traditionally played with a 3-4-3 or 3-4-2-1 and he looks to continue with these tactics at Tottenham Hotspur with Harry Kane, Son Heung-min, and Dejan Kulusevski playing as his preferred attacking trio. So Memphis can easily slot in as a replacement for either of the three players or if Conte decides to play a 3-5-2 Depay can play as a No.10 supplying for Premier League’s deadliest duo of Kane and Son.

But according to transfer guru Fabrizio Romano, “Tottenham are more than happy with Kulusevski as part of long term project” which means that Spurs will probably sign Dejan from Juventus with a mandatory buy clause in case Tottenham will qualify to UCL next season or he manages to make 15 appearances as a starter.

If the Lilywhites prefer to extend his stay at the club they have to shell €10m loan fee until 2023 or they can outright buy him at €40m next summer or €35m this summer. With these kinds of transfer sums into question, Spurs will probably sign either Depay or Kulusevksi and with Depay having a Transfermarkt value of €40.5m, FC Barcelona who are in dire need of cash will want a fee near to his transfer value. Plus the Swedish international is 7 years younger than the Dutch forward who only point out the fact that Tottenham will push for Dejan’s signature this summer.

It remains to be seen what avenue Spurs select with other parts of the squad in need of a major revamp. So Memphis Depay to Tottenham Hotspur looks a bit difficult at this moment of time. But Tottenham are yet again in need of guys with a halo around their name, especially if Harry Kane decides to call quits – and a certain Memphis could prove to be just that!