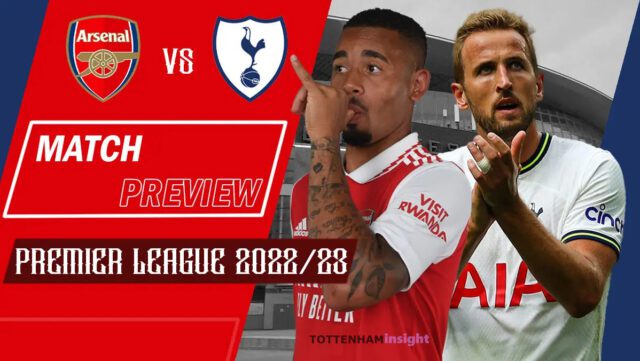 Arsenal host Tottenham Hotspur at the Emirates stadium on October 1st in what’s set to be an absolute thriller of a game for many reasons.

It’s not a secret that these two clubs provide some of the best games of the season anytime they meet up. Some would even go as far as saying that this is the most exciting game in the entire Premier League.

Every single game provides a unique experience for the fans and this one isn’t going to be any different. But this one, in particular, has the potential to be an all-timer. Why?

Just off the bat, think about how much is at stake here;

These are sides which have completely contrasting playing styles. You’ve got Conte whose main chance of creation comes through counters after absorbing the pressure and Arteta who wants to dominate the opposition and smother them with the ball. Each to their own, they make the most of it.

Arsenal are hopeful that the trio of Zinchenko, Partey and Tomiyasu will be available for the game. Kieran Tierney should also be available for selection after a head injury ruled him out of the last game for Scotland.

Tottenham expects Ben Davies to be back in contention after a knee injury occurred against Sporting. Lloris missed out on the international break due to a thigh injury and no new info has been released on him for now.

Kane has enjoyed a superb start to the season and already has 6 goals to his name. He’s their man player and serves as a bit of everything for them. Not only does he lead the way on the goal front, but he’s also their main chance creator. He’s currently on 13 goals in 17 games versus Arsenal as he looks to keep going in the same vein of form.

Antonio Conte has mostly relied on Kane and Kulusevski this season with Heung-min Son only coming back to life in his last game vs Leicester City where he scored a brilliant hattrick off the bench in a 6-2 victory. Perisic should also be mentioned as his 3 assists in the league shouldn’t go without praise. Tottenham looked as dangerous as ever in that game and they’ll take that confidence into the game at the Emirates.

Gabriel has been a breath of fresh air for Arsenal this season. Arsenal look rejuvenated up front as he, among others, upped the level of the entire team. Just like Kane, he has a multitasking role where he isn’t only limited to scoring goals. He’s also his side’s main chance creator and their top goalscorer (4). Only Saka has more assists to his name then Jesus in this Arsenal side but Jesus has more chances created to his name.

Mikel Arteta has goals flowing through the team right now. Jesus grabbed his 4th off the season versus Brentford to add to his 3 assists with Martinelli and Odegaard not too far behind his output (both on 3 goals). Saka leads the way with assists for Arsenal with 4.

I expect Tottenham to soak up the pressure and try to hit Arsenal on some deadly counters with Heung-min Son and Harry Kane. Conte will look to frustrate the opposition and be narrow and tight at the back. Arteta won’t stray away from his principles and he’ll look to gain control early on through a high line and controlling the ball.

It’s gonna be interesting to see if Tierney (better defender) or Zinchenko (better controller) start the game. On the other hand, will Antonio Conte pull Richarlison back to the bench now Son’s back in form? Both teams are dangerous on set pieces so that’s something to look out for. Hopefully, we have a great game on our hands to open the weekend.