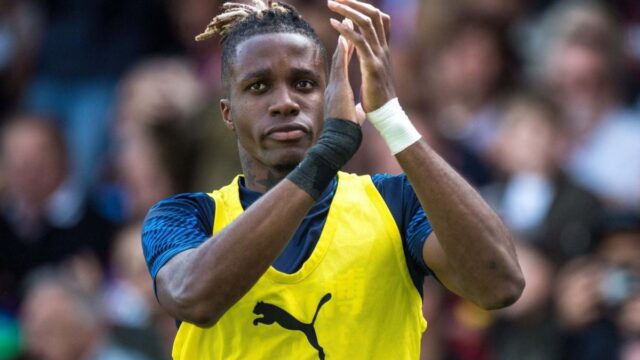 As the summer transfer window looms ever closer, rumours of all kinds start flying around. Most recent of them that Tottenham Hotspur might be looking at Crystal Palace winger Wilfried Zaha as a potential transfer target. Ex-Spurs forward Darren Bent has suggested that his former club should make the Ivorian speedster their top target ahead of the next season.

Reports emerged recently that Spurs’ superstar Harry Kane could be leaving the club this summer after he was said to be unhappy with the club not challenging for any major trophies. As a result, the North London club are gearing up for the potential departure of their star striker and Bent has pointed out that Zaha could be a replacement for the Englishman.

Wilfried Zaha is not a striker, but he is versatile and can play in any position in attack. This versatility is one of the many skills that have helped him become the Palace talisman. He is a skilled dribbler and famed for his speed that helps him leave defenders in his wake. Zaha’s 9 out of 11 goals this season have come when he has played a centre-forward, showing that he is as effective upfront as he is on the wing.

Darren Bent believes that if Spurs would be able to sign the Ivorian winger for around £50 million and he would make an excellent addition to the Spurs attack that barring Harry Kane also currently has Heung-min Son, Steven Bergwijn, Erik Lamela, and Lucas Moura. Bent also further said that Spurs should go for Southampton striker Danny Ings in addition to Zaha.

He said, “You’re never going to sign a recognised centre-forward who is going to give you the same kind of output [as Kane]. He is one of the best two strikers in the world. So you’re going to have to start getting goals from other areas. I’ve spoken about Danny Ings, he’s not a direct replacement, but he’ll get you goals. Someone like Wilfried Zaha, get him in the squad, you’d be able to get him if you’ve got £150m to spend.”

Tottenham Hotspur have been criticised over the past few seasons of being guilty of not backing their managers in the transfer window and not splashing the cash like other big clubs. With Spurs currently looking at the 2021/22 season without European football, they have to splash the cash if they want to challenge for the top 4 spots or even the league title. Fans have protested against chairman Daniel Levy and the ownership, and if Spurs want to gain back the trust of their fans they will have to back the manager in the transfer window this summer.

Zaha has proven that he is a quality player, and has shown his worth in the Premier League at Palace. He has been linked with a big-money move away from the Eagles for some while now having previously been linked to Man United and Arsenal. However, if Spurs were to sign him this summer, he would definitely improve their attack and although the price of his signature would not be cheap, it could certainly be worth it.