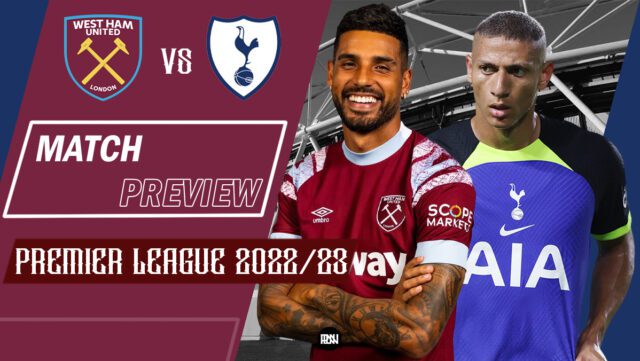 A London derby is brewing in the Premier League as West Ham United face off against Tottenham Hotspur here in the midweek fixtures.

West Ham United have not had the ideal start to the season, losing the first three games and winning one. However, they will be determined to turn it around and there is no better time than a derby to start a turnaround of form. The Hammers were last in action against Aston Villa away from home, as they snapped their losing streak, scrapping for a 1-0 win at Villa Park, after a shot by Pablo Fornals took a deflection and looped over the Aston Villa keeper and into the goal. It was a tough battle for the Hammers and the home side looked the more threatening of the two in the first half, but the visitors kept their wits about them, scored and then held on to the lead for their first league win of the season. Up next for them is the London derby, full of historical significance, and one they will want to come away from with a positive result. Both teams are pretty even in their head-to-head record in the last five games, with both winning two and drawing one.

Spurs were last in action against Nottingham Forest last weekend winning 2-0 away from home. Harry Kane led the Men in White with a sublime brace, and it was a decent display, although Forest made life difficult for them. That win propelled them to 3rd in the table, level on points with Man City in second and just two points behind leaders and arch rivals Arsenal. Manager Antonio Conte has set about with a purpose this season, actively bringing in the players he wants in the transfer window and nailing down his philosophy within the team. It is working out well so far for the Lilywhites, as they have started the season well, announcing their intentions in the title race. It will be a real test for them on Wednesday, regardless of West Ham’s form, with a derby always capable of throwing up a surprise.

West Ham boss David Moyes confirmed that midfielder Lucas Paqueta will undergo a medical soon, but it seems unlikely he will play any part in the upcoming game against Spurs. The Hammers travelled to Birmingham on the weekend with a strong squad, and there should be more of the same at Moyes’ disposal on Wednesday. Ben Johnson was subbed off early in the game with what looked like a muscle injury, and it remains to see how bad the injury is. It is rumored to be a hamstring injury which could keep the young fullback out for a few weeks. Other than that there are no big injury concerns for the Hammers as of now.

Tottenham Hotspurs left Nottingham without any injuries, and there will be a host of options for Conte to consider, with a congested few days of football coming up. Defender Cristian Romero and young midfielder Oliver Skipp were missing from the squad that travelled to Nottingham with injuries, and they are expected to return to training this week. However, it seems unlikely both of them will start, and could feature on the bench. Spurs are expected to part with a few players this week, with Bryan Gil, Harry Winks and Sergio Reguilon all set to leave London in the coming few days.

It does not get much bigger than a derby game under the lights in English football, and the latest edition one of the oldest derbies in England takes place here on Wednesday night. It is always an enthralling fixture when these two sides meet, and the animosity between the two sets of fans always makes for a special atmosphere in the stadium.

West Ham United were provided a cool relief with Sunday’s win after three losses saw the Hammers come under a load of pressure. The home side were expected to challenge for the European spots this season, and although it is not too late now, the Irons have some ground to make up on their fellow challengers for a top six spot. Coming to Wednesday’s game, David Moyes and his boys will be expected to play on the counter. The Hammers will let the visitors have all the possession and will look to hurt them on the break. Moyes could use the pace of Jarrod Bowen, Pablo Fornals, Said Benrahma and others to his advantage and hope to defeat Spurs on the counterattack.

Spurs have, so far this season, played in an extremely well-organized manner, as is custom with any Antonio Conte side. They have at times looked like one of the hardest teams to break down and have defended well with all players aware of their roles and positions. West Ham United on the other hand have not been confident in defence, and their opening three games are evidence to that fact. It will be very interesting to see how both sides go about it, but both teams will be eager to get a good start and pressure the other immediately from the off.

The English midfielder first came onto the scene a few years back, and since then has blossomed into one of the best defensive midfielders in the world. Instrumental for both club and country, neither side is complete without Declan Rice. He has formed a strong bond with Tomas Soucek in the midfield pivot for West Ham, and the team looks more solid and organized with them playing. The 23-year-old has a wonderful eye for a pass, and can pick out a teammate easily. His performances over the past couple of years have caught the eye of top European clubs, and was the subject of interest from a few clubs this season. However, he has decided to stay in London for the time being, and it will be exciting to see what the midfielder brings to the team this season. He is one of David Moyes’ most reliable players, and will be expected to help break down Spurs attacks and start their own counter-attacks on Wednesday night.

The Englishman scored his first just five minutes into the game, as Tottenham threatened early on, and Kane was the leading light for the Lilywhites. Leading the line, he combined well with Heung-min Son and Dejan Kulusevski, and the trio are looking more lethal together as the games go by. Harry Kane then saw a penalty saved by Forest goalkeeper Dean Henderson, but atoned for his mistake later with a simple finish in the closing stages of the game. He will be the one to lookout for again on Wednesday night, and with his sublime record of 11 goals and 4 assists in 15 games against West Ham, the Irons will undoubtedly hope to keep Harry Kane silent.