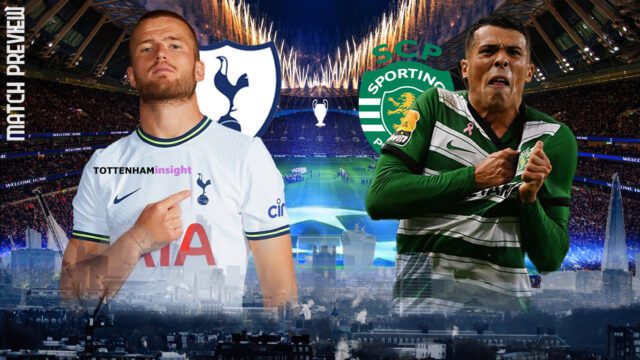 Tottenham Hotspur slumped to a second defeat on the trot which has put a severe dent in their otherwise marvellous run of form. The London outfit have been a ghost of their former selves for a couple of games –  they were massively outplayed by Ten Hag’s Manchester United in the mid-week clash and suffered an embarrassing home defeat at the hands of Eddie Howe’s Newcastle United in Sunday’s encounter. The latest defeat also ended the Spurs’ 10-game winning run at home.

From an impressive 23 points in their first 10 games, Tottenham’s initial joyride has come to an abrupt stop. However, all eyes will turn to their Champions League fixture against Sporting Lisbon this Wednesday. Spurs currently lead the Group D table with seven points on the board while Sporting CP sits at 3rd, just one point shy of the table toppers. It’s vital that Conte’s men are able to put the consecutive setbacks behind them and focus on their game against Sporting where a win would send them through to the Round of 16.

On the other hand, Sporting will be looking to firm their grip on a top-two finish. The Lisbon side will need to defeat Spurs and beat Eintracht Frankfurt in their final group stage game to all but guarantee their berth in the knockout stage. However, a defeat on Wednesday would severely quash their hopes of making it to the Champions League Round of 16.

Spurs are starting to have an increasing number of key players on the treatment table. Cristian Romero and Pierre-Emile Hojbjerg are rumoured to be doubtful after suffering from fatigue-related problems. They could be the latest to join long-term absentees – Richarlison and Dejan Kulusevski on Tottenham’s injury list.  Spurs were without Romero and Hojberg in their 2-1 home defeat against Newcastle as well. However, both players still have an outside chance of returning from their respective knocks.

Sporting suffered a double blow in matchday four of the Champions League when they were beaten 2-0 by Marseille and also had two of their players sent off. Portuguese winger Goncalves will miss the game as he serves his suspension alongside his teammate- midfielder Esgaio. In Goncalves’ absence, striker Paulinho is all set to make his first Champions League start of the season. Sporting manager Ruben Amorim has also confirmed that Daniel Braganca (cruciate ligament) Luis Neto (knee) and Jeremiah St. Juste (hamstring) are deemed to be long-term absentees while skipper Sebastian Coates is expected to miss the flight to London as well.

Both teams have an almost identical run of form after registering 3 wins out of the last 5 games. Sporting put out an impressive display on Sunday as they beat fellow rivals Casa Pia 3-1. However, they have suffered back-to-back defeats at the hands of Marseille in the Champions League. The only positive stems from the fact that the Lisbon side beat Spurs comfortably on Matchday 2 at home which shall definitely ignite their hopes of pulling off an upset at London as well.

Plagued with several injuries, Conte is expected to stick with his 3-5-2 system with a keen eye to have more men in the middle. However, as seen in recent games, Spurs will be happy to sit back and absorb pressure while looking to hurt Sporting on the counter. Amorim on the other hand will use his favoured 3-4-3 formation. He’ll want his forwards to target Lloris from the word go – the Spurs captain had a night to forget after being culpable of cheaply giving away 2 goals on Sunday.

Amorim’s men will be looking to replicate their performance at Estádio José Alvalade  However, they will miss Coates’ leadership at the heart of defence. Sporting’s back three will be wary of the threat posed by the deadly duo of Kane and Son on the counter-attack. With both teams in search of a revival on their current form, there’s no knowing who will come out on top at the end of 90 minutes!

Cometh the hour, cometh the man – Harry Kane has been a force to be reckoned in world football for almost a decade. The English centre-forward almost forged a comeback against Newcastle on Sunday as he pulled a goal back. He hardly put a foot wrong against Eddie Rowe’s men and was unplayable – a pattern evident for years. But his efforts weren’t enough to spare Tottenham the blushes. However, Kane doesn’t shy away from the big stage, he will be looking to leave his mark and propel his side to a victory to avenge the 2-0 defeat at Lisbon. With Son having a slow start to the season and Kulusevski out injured, the Tottenham faithful will hope that their star man will steer them single-handedly into the knockout stages of Europe for the first time since the 2019-20 campaign.

Likened to Lionel Messi in 2016 by then manager Mauricio Pochettino, Edwards will have a point to prove against his former team when he returns to London. Gifted with a magical left foot, quick feet and a low centre of gravity, Edwards was one of Tottenham’s brightest prospects until he left in 2019. In the matchday 2 fixture against Spurs, the 23-year-old forward did everything right but score. He created a big chance for himself and a few opportunities for his teammates right till he was subbed out in the 89th minute. The Sporting attacker was a livewire on the pitch and kept his ex-teammates on their toes as he whisked through challenges. Edwards will certainly look to make his impact felt on the scoreline this time around as he vows to show Spurs what they are missing.