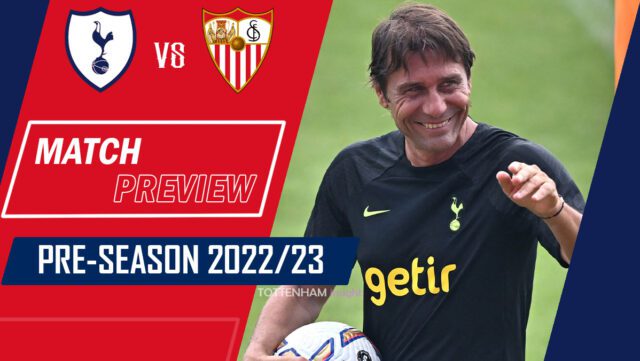 Following a convincing performance against K-League XI in their first exhibition game in South Korea, Tottenham Hotspur are all set to face the Spanish giants, Sevilla today. Spurs will look forward to impressing the base of South Korean fans after the warm reception they received.

The Coys proved they meant business against the K-League XI defeating them 6-3 at the Seoul world cup stadium. On the other hand, Sevilla will be looking forward to play their premier pre-season exhibition match and giving their South Korean fanbase something to cheer for as they come to South Korea for the first time.

Tottenham fans have been waiting for this South Korean tour for a long time as they wanted to see the summer signings make their first appearance for the team. However, wasn’t really fulfilled as the fans only saw Richarlison make an appearance for the team against the K-League XI. The fans are now waiting for the second exhibition game in which they hope to see Ivan Perisic and Clement Lenglet make their appearance.

A variety of videos of Antonio Conte’s severe workout regime went viral on social media, leaving people like Harry Kane and Son struggling to breathe. Conte has made his intentions with the team very clear – he means business and won’t be going light on his team regardless of the superstar status.

The results were, however evident on the pitch as the Spurs put on a fabulous show for the South Korean fans crushing the K-League XI, 6-3 as Eric Dier joined braces by none other than the same duo – Harry Kane and homeboy Heung Ming Son. Meanwhile, the fans were excited to see Richarlison play for 77 minutes on the pitch impressing everyone, including Antonio Conte, displaying his ability to switch roles from a Number 9 to a Number 10 as Harry Kane and Son replaced Lucas Moura and Bryan Gils.

This match will be the last exhibition match played on the South Korean land as the Lillywhites will be travelling again to Ibrox to face the Rangers and then on July 30th to face Jose Mourinho’s AS Roma in Israel.

Sevilla, on the other hand, unlike Spurs have had rather a light summer transfer window as they signed center-back Marcao (their one and only signing) while sanctioning the exits of various players including Diego Carlos and Anthony Martial.

The Spanish giants proved last season that they are a force that means business as they gave Real Madrid a good chase for the La Liga title, although dropping to the #4 position in the last couple of weeks of the competition but retaining their UCL spot.

With rumours of Julen Lopetegui rejecting various European giants for Sevilla floating around, he will be looking forward to prove his decision right and proving it against European Giants like Tottenham seems to be just the perfect opportunity for him.

This clash seems to be a very interesting one as the #4 English side faces the #4 Spanish side and some fans are saying that this pre-season clash will just be another crucial matchup for the Premier League vs. La Liga debates.

As the ‘Bells of Covid’ continue to toll upon Tottenham, Antonio Conte revealed that both Fraser Forster and Yves Bissouma will be missing the clash against Sevilla as they continue with their isolation period. While the likes of Dejan Kuluveski and Ben Davies are ruled out due to calf injuries.

However, Ivan Perisic may make his debut with the Spurs, as he is expected to recover and be able to play the exhibition game on Saturday.

Richarlison could make his second start for the squad alongside Harry Kane and Son. Youngsters like Harvey White will also be eager to impress Antonio Conte, as we may see him start over again.

Sevilla, on the other hand, will be missing the ‘in-demand’ French superstar center-back, Jules Kounde as he is ruled out of this tour due to a hernia and is yet to join the training.

The fans, however, might get to see the debut of Marcao under the Sevilla shirt this Saturday as he is rumoured to start for the team alongside the much awaited return of Karim Rekik to the squad.

Tottenham fans might see a familiar face as Erik Lamela, the former Spurs striker might start for Seville this Saturday too.