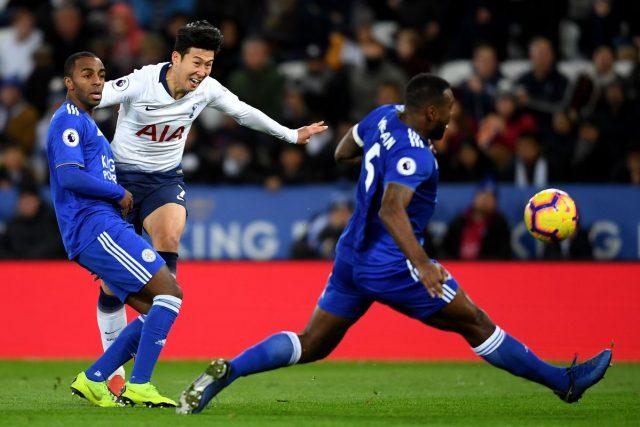 Leicester City head to London to take on Tottenham on Sunday lunchtime, in the penultimate round of fixtures in the Premier League.

Leicester City are currently 4th, and are chasing Champions League football under Brendan Rodgers, while Tottenham are 7th and are looking to leapfrog Wolves for qualification to the Europa League.

Tottenham have lost just one game since the restart, a 3-1 loss against Sheffield United and are in good form at the moment after successive victories against Arsenal and Newcastle United.

The Foxes meanwhile, are struggling to keep up with Chelsea and Manchester United, and have won only two of their last eleven Premier League games. Dropping points against Tottenham would prove to be a huge blow in their quest for Champions League football.

Here are five key head to head battles that could decide the fate of the match on Sunday:

Harry Kane’s hamstring injury in January forced the Englishman to miss several games this season. After nearly five months without football, Kane came back stronger after the restart, and now has 15 goals in 27 games in the league. Jose Mourinho will need his main striker to be at his best against the Foxes.

Jamie Vardy has been in phenomenal form for Leicester this season. The 33-year-old is the current Premier League top scorer, neting a whopping 23 goals in the league so far.
Despite Iheanacho’s recent performances, Brendan Rogers will stick to Vardy in his starting lineup, who continues to be their most reliable forward.

Son Heung-Min undoubtedly has been Tottenham’s player of the season, and has shouldered a majority of the attacking responsibilities ever since Harry Kane’s injury.

The South Korean is in red hot form at the moment as he scored his first goal post lockdown against Arsenal on the weekend and opened the scoring against Newcastle on Wednesday. Mourinho will need ‘Sonaldo Nazário’ to deliver in these last two games if Spurs want to compete in Europe next year.

Perez was signed by the Foxes in a £30 million transfer from Newcastle last year and has made an immediate impact this season. The Spanish forward has quickly taken to the Leicester play style, providing some much needed creativity and quality to their attack.

The 26-year-old has started most games from the right-wing, occasionally drifting inside and switching positions when needed, making him extremely versatile and unpredictable.

Alderweireld has been Tottenham’s best defender since his arrival back in 2015. He has made over 200 appearances for the Lilywhites in all competitions and continues to be their most reliable player in the floundering backline. The Belgian scored a bullet header in the 81st minute to claim victory over rivals Arsenal in the north London derby last weekend.

The 31-year-old has had a pretty mediocre season so far, with the Spurs backline leaking goals and will need to do better against a deadly Leicester attack on Sunday.

Jonny Evans has formed a rock solid partnership with Caglar Soyuncu in the Leicester defence this season. The 32-year-old has made 35 appearances in the league for the Foxes this season keeping 13 clean sheets.

With Soyuncu serving a three-match suspension, Evans is expected to be deployed alongside Wes Morgan on Sunday.

Sissoko failed to nail down his spot under Mauricio Pochettino, playing in several different positions under the Argentine, but the Frenchman seems to have found his place under Mourinho.

Sissoko is now deployed as an anchor in the Spurs midfield alongside Lo Celso, controlling possession and breaking up opposition attacks. The 30-year-old is extremely energetic and physical, and can cover a lot of ground either to track back or start attacks from deep within midfield.

Ndidi has been a key member of Rodgers’ squad at Leicester, and has developed into one of the Premier League’s best defensive midfielders.

The Nigeria international has made a whopping 121 tackles in the league this season, second only to Manchester United’s Aaron Wan-Bissaka. Ndidi is an absolute tank in the Foxes midfield and it will be interesting to see him face-off against his counterpart Moussa Sissoko tomorrow.

Lucas Moura has plenty of experience playing in the Ligue 1 and Premier League, which is why Mourinho prefers to start the Brazilian over the likes of Steve Bergwijn and Gedson Fernandes.
Moura has the terrific work-rate and energy needed to disrupt opposition passes, and press them into losing the ball, something Mourinho likes in his attackers.

But the Brazilian is in sore need of goals, and is yet to score for Tottenham in the league since December. Mourinho still has faith in Moura and continues to start him but fans are beginning to run out of patience.

Harvey Barnes has undoubtedly been Leicester’s most exciting player to watch this season. The 22-year-old has been heavily involved in Leicester attacks, scoring six goals and setting up eight others in the league.

The Leicester academy graduate has made the left wing spot his own, and has formed an excellent partnership with James Maddison and Ayoze Perez in his first full season in the senior squad.