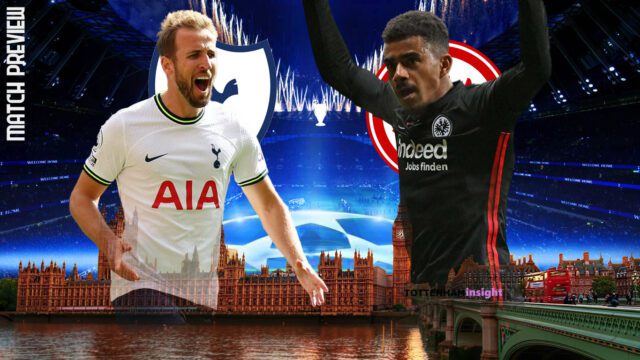 Spurs did well enough to defeat Brighton & Hove Albion 1-0 away from home. That win helped them keep the pressure on league leaders Arsenal and second-placed Manchester City as the fight at the top of the table continues to be tight. Spurs were at their defensive best on Saturday after taking the lead 22 minutes into the game. Harry Kane scored his 8th goal of the season to give the Lilywhites a much needed 3 points as they bounced back from their North London derby defeat last week. They now welcome an Eintracht Frankfurt side which they found hard to beat last time out and manager Antonio Conte knows they will have to be much better than their unimpressive performance in Germany last Tuesday. With fatigue setting in due to a packed schedule, both sides could field teams with a few rotations which will make the game more interesting.

Frankfurt were last in action in the Bundesliga when they faced a surprise defeat away from home against bottom-of-the-table Vfl Bochum. The Eagles conceded 3 goals in the last 20 minutes of the game, as a shell-shocked Frankfurt team could not respond to a late blitz by the hosts who took their first win of the league. That defeat saw them fall to 8th in the league table two points behind Bayern Munich. Although Frankfurt are in good form, having won 4 of their last 6 Bundesliga games, they will no doubt be wondering what went wrong, and will have to regroup soon as they travel to London to take on Spurs who are in good spirits themselves after an important win on Saturday.

Eintracht Frankfurt have had a very decent start to a tough Champions League Group D. They gave Sporting CP a tough time in their first game, but were guilty of missing scoring opportunities and were punished by the Portuguese side as they ran out 3-0 winners with a clinical second half performance. However, the German club did very well in their second game to bounce back, beating Marseille 1-0 away from home to get three deserved points and kickstart their UCL campaign. It was a drab show in their home game last week against Spurs, holding them to a 0-0 draw as both sides did not create enough to warrant a goal. Manager Oliver Glasner will be hoping for a better showing going forward on Wednesday night.

Tottenham Hotspur had an injury scare in their weekend league win against Brighton with their star striker Harry Kane going off with a potential ankle injury in the last few minutes and might face a late fitness test before Wednesday’s clash. Although the Englishman said that he was fine in his post-match interview, it remains to see if he is available for selection. Emerson Royal was suspended for the league game after his red card against Arsenal, but it does not apply to the European games meaning he will return to the squad and be available for selection.

Eintracht Frankfurt were without Mario Gotze in last week’s draw against Spurs, but he returned to the starting lineup on the weekend, playing for around an hour before being subbed. He seems fit again and will be available for selection in London. Kristijan Jakić who returned to the squad from injury last week also started in the defeat and was taken off at the start of the second half. It seemed like a tactical substitution from Oliver Glasner, and the Croatian should be in the traveling squad to London. New summer signing Jerome Onguene is still suffering from injuries meaning he has to await his debut for the club.

The main talking point before last week’s game was the similar style of play of both managers – Oliver Glasner and Antonio Conte- and their liking for the 3-4-2-1 formation, with two forwards sitting just behind the main striker providing a three-pronged attack. The two teams lined up in exact similar formations and with similar setups, effectively cancelling each other out. The result was an insipid display and a 0-0 draw which left both sets of fans disappointed.

Eintracht Frankfurt were never the favourites going into that clash, but Oliver Glasner’s men stood up to the English visitors, battling for every ball and were very good against an opposition that many expected to win. It was more of a loss for Antonio Conte and his lads, as the drab display again rose questions as to the caliber of the team to challenge for honors, especially following that crushing derby defeat where they looked nowhere near Arsenal’s level. A strong response was expected from the players and manager in Germany, but the Lilywhites looked lethargic, fashioning only four or five good chances and failing to score any of them.

They will get one more chance though, with the Eagles visiting London on Wednesday. Following that tactical battle last week, it remains to see if either side changes things up in search of a win. A win for either side will hand them the impetus of progressing to the next round, with Sporting CP seemingly having the upper hand so far. It is however a very tough group, with each club showing they cannot be counted out even after the halfway point. Marseille are just a point behind Spurs and Frankfurt, handing Sporting an unexpected humbling last week. It looks as if the fight for the top two spots will go down to the wire, and on Wednesday night, neither club can afford to lose.

An interesting storyline coupled with talented teams and exciting players makes up for what will be a thrilling contest here in London, making it hard to miss.

The South Korean forward had a slow start to the season, but burst to life in Spurs’ 6-2 win against Leicester City at home. He started that game on the bench but came on in the second half and scored a brilliant hat trick to put the game beyond the reach of the Foxes. Since then, he’s been one of the better players for Spurs and was on hand against Brighton last time out to assist Harry Kane’s winner. It was the 43rd time the two combined to score in the Premier League, the most of any duo in the competition’s history. Heung-min Son will be expected to start again for the Lilywhites on Wednesday night and if Kane misses out he will be their main man in attack.