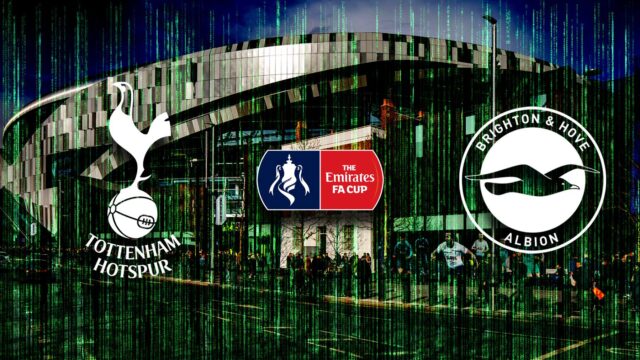 Tottenham Hotspur are back in action this weekend after a hiatus of almost two weeks due to the international break. Although they have been out of action on the pitch, they have certainly grabbed the headlines off-the-pitch with their transfer window activity, and the fans will be looking forward to the new year and the second half of the season. This weekend sees the commencement of the fourth round of the 2021/22 FA Cup competition, with 32 clubs now remaining in the prestigious tournament. Tottenham have their sights firmly set on the fifth round of the FA Cup, but they face their latest hurdle in form of Brighton & Hove Albion this weekend.

Spurs welcome the Seagulls to their multi-million-pound stadium on Saturday night, as both clubs look to secure their spot in the next round. Lilywhites had a very good January transfer window, signing two players from Juventus in Dejan Kulusevski and Rodrigo Bentancur. These two signings will definitely be a boost for the Lilywhites in their race for a top 4 spot, with their rivals Arsenal, Manchester United and West Ham United choosing not to spend any cash in January. This has given Spurs a real advantage now, and the race for the top 4 could go down to the wire. Spurs were last in action against Chelsea at Stamford Bridge in the Carabao Cup semifinal, where they lost 2-0 on the night and 3-0 on aggregate. They were by far the second-best team in the overall tie, and Chelsea dominated their London rivals. They now turn their attention to the FA Cup, which remains their only chance at winning a piece of silverware for the first time since 2010.

Brighton & Hove Albion have been in poor form lately, drawing all of their last three games 1-1. They last won in the league at the start of January, and have had to come back from a goal down to secure a draw every time in their last three games. However, their last draw against Leicester City away from home meant that they have now lost only one of 11 away Premier League games, joint-lowest alongside league-leaders Manchester City. That will be a boost of sorts to Graham Potter and his men, as they travel to London to take on Spurs at the Tottenham Hotspur Stadium. Potter will be hoping that their away form will count for something against a familiar foe and they can build on it to get a surprise result on Saturday night.

This will be the first meeting between Spurs and Brighton this season, with their earlier league match postponed due to a COVID-19 outbreak. It will be very interesting to see the two go head-to-head, with Brighton certainly capable of a giant-killing.

Tottenham Hotspur new signing Dejan Kulusevski has been cleared to play in England, with the work permit going through and could be in contention to make his debut on Saturday. However, it seems Bentancur may have to wait a little longer for his debut, with the Uruguayan not granted a work permit yet and hence being unable to train with his new teammates. Centre-back Cristian Romero is in line to return to the squad after his injury and could start against the Seagulls. Talisman Son Heung-min is a huge doubt for the game, and Conte maybe cautious about rushing the South Korean’s return. Harry Kane scored in his last FA Cup game, and will be expected to lead the line again. Antonio Conte confirmed that two Tottenham players, young defender Japhet Tanganga and midfielder Oliver Skipp have sustained injuries and will be unavailable for the game against Brighton & Hove Albion.

Brighton & Hove Albion will be without Enock Mwepu, goalkeeper Jason Steele and youngster Jeremy Sarmiento, with all three ruled out of the game. There are doubts over the availability of midfielder Moises Caicedo, Alexis Mac Allister and Shane Duffy, and they will face a late fitness test. Robert Sanchez will be expected to start in goal, with Kjell Scherpen securing a Deadline Day loan move to Oostende. There is some good news for Seagull fans, however, with Yves Bissouma back with the club after Mali were knocked out of the African Cup of Nations, although it remains to see if he will feature on Saturday.

Familiar problems catching up to Brighton?

Brighton & Hove Albion had a mixed 2021 year. The early months of the year were dominated by their struggles in front of goal, with an underperforming xG to deal with. Their forwards were not clinical enough which will have given manager Graham Potter a huge headache. However, as the 20/21 season ended and the new 21/22 season began, the Seagulls seemed to have turned the corner in their goal-related struggles.

Forwards Neal Maupay, Leandro Trossard, Solly March and Danny Welbeck looked in rhythm with each other and their goal-scoring issues suddenly disappeared. Manager Graham Potter was credited with the turnaround and with no new forwards signed, it was purely down to the training sessions. The Seagulls started the new season brilliantly, winning 4 of their first 5 games and climbing to 4th in the league. Graham Potter’s style of play and philosophy were working for the Seagulls, and they looked a really tough outfit to beat. Their early form suggested that they had the makings to be a surprise contender for the top 6 positions and even challenge for the European spots.

However, their form fell off a cliff after the 5th game week, and they have since gone 10 games without a win in the league. They were hard done by on a few occasions, but they have struggled massively in front of goal on most times, and now find themselves in 10th position, but within a shout of the top 6 places. They have drawn 9 out of 15 games so far, and their struggles and issues from the last season have seemed to return. The Seagulls are underperforming again in terms of xG (Expected Goals for) metric, with Graham Potter’s men having an xG of 26.76 while only scoring 23 goals so far in the league, meaning that they are underperforming their xG metric by 3.76 less goals.

They seemed to have turned this corner at the start of the season, but their problems have returned again, and that has been a crucial factor in their wretched run of 11 games without a win. The Seagulls broke that run with a fine win over Brentford, but since then have won 2 out of 6 games, drawing the other 4. The fact that each of the 4 draws ended with a scoreline of 1-1 tells it all. Their defence has been putting up decent performances, but their attack has not been clinical enough to go hand-in-hand with their defence.

Their away form has been one of the best this season, having suffered just one defeat on the road so far this season – the joint lowest number of away losses alongside Manchester City, and have discovered a good habit of picking up away points. Spurs have looked like a hard team to beat under Antonio Conte, with the Italian setting up the Lillywhites in a more organized and stable shape. However, Brighton’s away form should be a cause of concern for Spurs, with the magic of the FA Cup always capable of throwing up surprises.