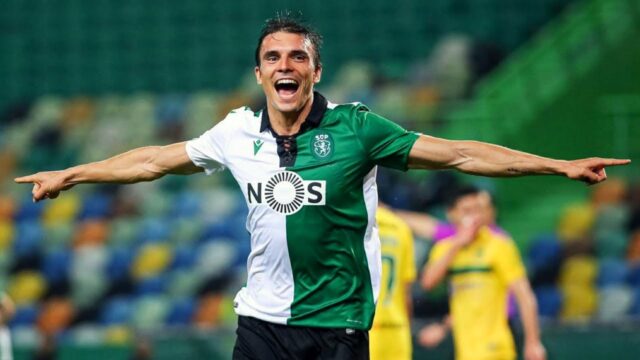 Tottenham are yet to finalize the man at the helm as we near the commencement of pre-season activities, but with that being said – Fabio Patrici is working on recruiting some best of talents as Spurs are being linked with the likes of Dusan Vlahovic, Lorenzo Pellegrini, Mikkel Damsgaard, among many being linked with a move to North London. Now as per today’s edition of Record, Spurs have taken a ‘step forward’ in pursuit of Sporting Lisbon midfielder João Palhinha.

Spurs are not the only club interested in the Portuguese’ services with Atletico Madrid, Sevilla and Everton are also said to be making rounds for Palhinha’s signature. The report also suggests that albeit Everton’s interest in João Palhinha, the Blues from Merseyside have ‘other priorities’, namely his Sporting team-mate Matheus Nunes.

Left Atletico Madrid, Sevilla, and Spurs; Diego Simeone’s side will reportedly restrict anything above €25m for João, Sevilla will need to vend off before any recruitments and about Tottenham – despite links lately, there isn’t any information about serious talks to bring Palhinha to N17.

João Palhinha is at the European Championship with Portugal, with the 25-year-old being a second-half substitute against France earlier this week, and was definitely one of Portugal’s pre-eminent performers that night.

Let’s take a look into who João Palhinha is and what does he bring into the game;

Who is João Palhinha?

João Palhinha, a defensive midfielder, has been at Sporting Lisbon since he arrived from third-tier Portuguese side Sacavenense when he was seventeen. Almost immediately (after playing some games) João had a guaranteed starting place in the club’s U18s squad & started drawing attention from first-team coaches with his impressive antics.

In his first season with the first team (2012-13), João Palhinha featured in sixteen games in only half of a season, scoring a couple of goals as well, which is pretty impressive for a defensive midfielder.

After loan spells at Moreirense, Belenenses – he found himself at Braga where he enjoyed his most impressive couple of years before he returned to Sporting Lisbon. And in 2020-21, João Palhinha finally found himself in Sporting’s midfield, helping the Lisbon-based club to Primeira Liga and Taça da Liga. He was also named in Primeira Liga Team of the Year.

During his time at Braga, Palhinha used to play in a double pivot in either of 3–4–3 or 4–2–3–1, where he’d stay back and shield the defensive line. He loves to be involved in build-up play, but once he gets the ball to the attacking unit João is uninvolved and maintains his discipline at the heart of the midfield.

At 6 foot 3 inches, João Palhinha stands out with his physical attributes; but it’s pointless to possess such a frame and not use it in a football match – Nevertheless, that isn’t him. When you watch him play, the 25-year-old is running around with big lungs trying to reach everywhere and stop opponents from progressing, to physically better them into regaining possession. His build is also useful from the dead-balls, Palhinha is very much an asset when it comes to the offensive as well as defensive presence from free-kicks and corners.

Now, the 25-year-old is not a stylish passer, you won’t see João making those over the defence passes – but he possesses strong attributes when it comes to shot passes. He mainly keeps it simple on the ball but is effective doing that. He checks his shoulder, receives the ball, passes to his fellow midfielder, and pretty much hovers around in the centre then.

What will João Palhinha bring to Tottenham?

With Pierre-Emile Höjbjerg controlling the heart of the midfield, alongside possibly an aging Moussa Sissoko or too-attacking-minded Tanguy Ndombélé – Tottenham need a no-nonsense defensive midfielder to fill in for the loopholes when the team either press too high or are too much involved in the attacking third with the ball. Essentially when Höjbjerg signed, he was destined to do this job but his qualities on the ball and his willingness to get ahead of his role has left space to exploit space in the middle of the park on multiple occasions. This is where João Palhinha comes into the picture.

Lately, Nuno has been linked with a move to Tottenham, although I feel he is not a profile Spurs should be looking at – but if he eventually arrives, João Palhinha could play the Ruben Neves role while Höjbjerg could take up João Moutinho role (comparing to how Nuno used to play at Wolves).

Although that being said, it’s difficult to envisage João Palhinha’s role at Tottenham Hotspur stadium till there is a face at the helm with a known style of play. Or we could just go down the Mourinho road again – we all know how that ends!

How much will Palhinha cost?

The Portuguese is reportedly valued by Sporting at £30 million, although with the arrival of Bruno Lage at Wolverhampton Wanderers – he is said to be their number one target off late, especially if Arsenal are to take Ruben Neves off their hands.

It looks like Bruno Fernandes is heading to England