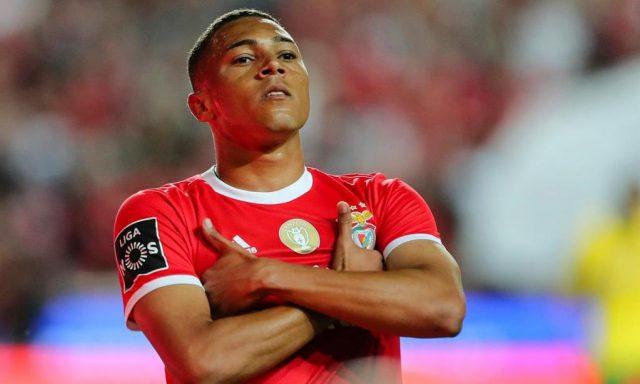 Tottenham have completed the signing of Carlos Vinicius on loan from Benfica.

Vinicius will join The Lilywhites on loan with an option to buy him at the end of the season for £41m, with Spurs paying an initial £3m as loan fees.

Spurs have finally signed a backup forward for their talisman Harry Kane and Carlos will be the North London club’s sixth signing of the summer transfer window.

Vinicius had joined S.L Benfica from SSC Napoli in 2019 for a fee of €16m. During the 2019-20 season in Portugal, Vinicius scored 24 goals in 49 appearances across all competitions and also topped the scoring charts in the league.

He was previously linked with Serie A clubs Juventus and Inter Milan but Spurs have wrapped a deal to signing the Brazilian forward that is according to Italian journalist Fabrizio Romano.

After winning the penalty shootout in the Carabao Cup against Chelsea, head coach Jose Mourinho confirmed that Spurs were still in the market searching for a backup striker, “I am optimistic, but more than that the feeling that I like is that we are trying everything to do it. You succeed or you don’t succeed. It’s like a football match: you win or you don’t win but you give everything and try everything. The transfer market is the same. I like the feeling that my club is trying to do everything for us and for the team, that’s the most important thing for me.”

Spurs will most certainly miss his services in the league encounter against Manchester United as the move is a subject to medical but fans will see him in action after the international break when Spurs host West Ham.