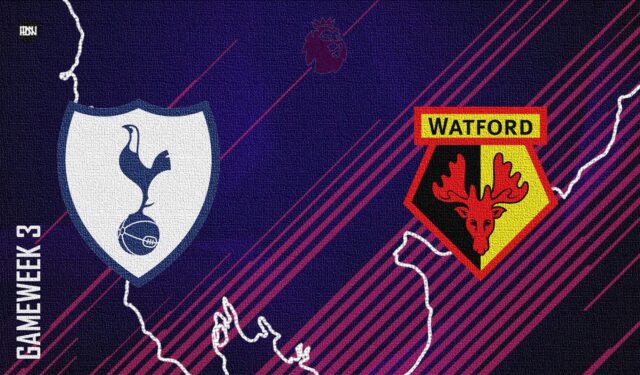 Two weeks have gone by since 2021/22 Premier League started, and the league has lived up to its name as one of the most pulsating leagues in the world. The third gameweek is now just around the corner, and it brings us more and more exciting action. This week we see North London club Spurs host the Hornets, Watford FC at the Tottenham Hotspurs stadium, as manager Nuno Espirito Santos looks to become the first manager in the history of the club to win his first three league games in charge.

An impressive start to the campaign has seen Spurs win both of their games, including a gritty 1-0 win over defending champions Man City. Life under Nuno Espirito Santos has gotten off to a good start in the Premier League, with a loss in the inaugural Europa Conference League to Pacos de Ferreria, the only blemish on their start to the season so far.

Tottenham were last in action in the league against Nuno’s former club Wolverhampton Wanderers, as they won 1-0 at the Molineux, thanks to a goal from Dele Alli from the penalty spot. The Wolves game also saw the return of Harry Kane to the squad, by far the most important player for the club right now.

After a controversial few days, which saw Man City bid £160 million for the Englishman was followed by Kane’s absence from training. However, Spurs fans can now breathe a sigh of relief after the striker confirmed via social media about his intention to stay at the club for this season at least.

Watford FC enjoyed a good return to the Premier League, as they won their opening game against Aston Villa, stunning them 3-2. However, they could not continue their form against a well-organized Brighton and Hove Albion, as they were beaten 2-0 at the Amex Stadium. However, the defeat at Brighton meant they have lost each of their last seven away Premier League games, going without scoring a goal in five of these games.

A visit to Spurs provides them with a perfect opportunity to break that miserable run, while also stunning a vastly superior team, giving them the confidence boost they need for the season ahead. They were last in action against Crystal Palace in the second round of the EFL Cup on Wednesday, as Ashley Fletcher’s late strike was enough to see them through to the third round. Manager Xisco Munoz will hope to have his boys well rested and ready for the clash against Tottenham, as they look to stun their opposition yet again.

Harry Kane was included in the squad that traveled to Wolves and featured from the bench. He started and scored twice in the first half, as Spurs beat Pacos de Ferreria 3-0 on Thursday night in the second leg of the Europa Conference League. He will be in line to start on Sunday against Watford. The North London side will be without central defender Joe Rodon as he is still regaining fitness. Other than Rodon, Nuno will have a fully fit squad available for selection against the Hornets.

Watford manager Xisco Munoz has few doubtful players ahead of the trip to London. Spanish full-back Kiko Femenia, Englishman Nathaniel Chalobah, and Portuguese Domingos Quinoa are all doubts for Sunday’s game. Along with them, young forward Joao Pedro and midfielder Juraj Kucka also face fitness tests to be available for Sunday. Former Spurs full-back Danny Rose, who was pushed out of the club unceremoniously, will return on Sunday with Watford. It remains to see if he is picked in the starting XI.

If the first two games are anything to go from, Nuno has brought about defensive stability to the club. Two games and two clean sheets, including thwarting arguably the best attack in the league in form of Manchester City. He is known for his defensive style of play, and Spurs fans will be happy at the prospect of a potentially strong defense going into the season.

With Harry Kane back into the squad and fully motivated, there could be a real balanced look to Spurs under Santos. With less than a week to go until the transfer window ends, it seems that there will be no more arrivals, and Nuno will have to work with the squad he has got. With new defensive signing Cristian Romero settling in nicely, the Spurs defence could turn out to be a real dark horse this season, and it would certainly take Watford all their might to get past their defense.

The obvious choice at this stage, Kane will be the key man on Sunday for a number of reasons. After the summer that he has had, he will have to rebuild his relationship with the fans, and being the main man for Spurs will speed up that process.

Scoring goals should be his ultimate aim right now, and that will no doubt help him endear to the fans again. In his absence, Son spearheaded the Spurs attack, and it was clear that they need Kane to score the goals. Nuno’s pragmatic approach to the game is well known, and it has been seen in the past two games. Tottenham have scored just 2 goals, one of them being a penalty. They have created just one big chance in two games and are starved of attacking firepower. The return of Harry Kane will certainly help in that regard, and expect to see a few goals on Sunday.

The young winger and Watford’s record signing truly came to light with his dazzling display to stop Liverpool’s unbeaten run in 2019/20. Since then, he had a decent campaign in the Championship, scoring 13 goals and providing 10 assists to help the Hornets to promotion. Now, back in the Premier League, he will be expected to be the main provider for his team.

He has wonderful dribbling skills and has the pace to beat his man easily. Sarr has already got off to a good start, scoring in the first game back, and will look to build on it. Key to breaking down the staunch Spurs defence, his skills will be vital for the visitors if they want to leave North London with a point or three.