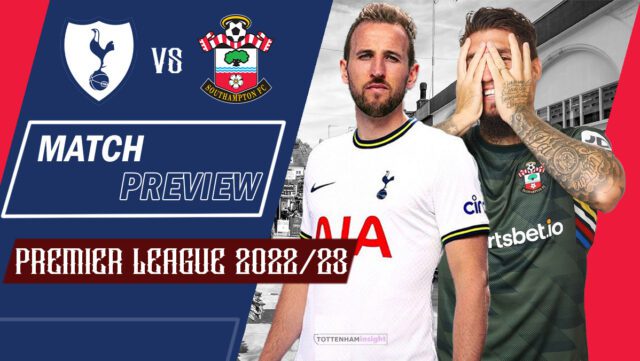 It’s that time of the year again! After an eventful summer break, the Premier League returns for its 2022/23 campaign this Friday as fans gear up for a season of exciting football across the calendar year. Having delivered an intriguing title race alongside a handful of entertaining clashes last season, the upcoming campaign is expected to produce even better match-ups this time around, with the competition across the board having improved in quality coming into the season.

Kicking off amongst a raft of fixtures this Saturday afternoon, a rejuvenated Tottenham Hotspur host Southampton in either side’s opening fixture of the season. Amongst the most active clubs in the summer transfer window, Spurs are expected to arrive with renewed prospects for the season as they look to challenge for silverware whilst retaining their Champions League spot in the upcoming campaign. With Antonio Conte having shown immense promise in qualifying for Europe’s premier club competition last season, the Italian manager is expected to extract the best out of his players over the coming season.

On the other hand, having undergone an inconsistent campaign – finishing 15th – last season, Southampton will be keen on improving their results. Having opted to recruit a couple of raw talents from Manchester City’s youth set-up alongside a handful of established players from Rangers and VfL Bochum, the Saints are likely to marginally improve on their standings; aiming to close in on a top-half finish this season. Amongst a number of Premier League clubs yet to make a significant signing this transfer window, manager Ralph Hasenhüttl will be looking to get the best out of his players, with the Saints expected to face a challenging season this time around.

Owing to a number of fitness issues amongst new signings, Antonio Conte is likely to field a similar team to last season this Saturday. New arrival Richarlison missed out on the fixture due to suspension whilst midfielder Oliver Skipp remains on the side-lines owing to a foot fracture.

As stated during the manager’s pre-match press conference, the involvement of Ivan Perisic, Matt Doherty, and Yves Bissouma remains uncertain owing to fitness issues, with either player unlikely to start the game against Southampton. Given the potential of securing a comfortable three points at home, Conte is expected to field his strongest XI, with Spurs expected to deliver a statement performance in the opening game-week of the new season.

With the squad already weakened owing to injuries and end-of-loan departures ahead of the 2022/23 campaign, Hasenhüttl will be keen on performing to the best of his ability this season. As stated during the pre-match press conference, the Saints head into the fixtures without the services of Nathan Tella and Theo Walcott. Right-back Tino Livramento remains the only other absentee, with Southampton looking to deliver a notable performance this Saturday.

Midfielder James Ward-Prowse is expected to, once again, lead the squad onto the pitch against Spurs, with the manager expected to include, at least, one of the new arrivals in the starting line-up this weekend.

With Spurs having failed to gain a victory – drawing one and losing the other – in either of the two meetings between the clubs in the Premier League last season, Saturday’s fixture could deliver a handful of surprises despite early predictions suggesting a one-sided affair in favour of the hosts this weekend. Despite doubts over the involvement of a number of Spurs’ personnel, Conte is expected to stick to his highly-revered 3-4-3 set-up against Southampton. In contrast, the visitors will be looking to make the best of their goal-scoring opportunities, with the hosts likely to retain a majority of the possession this weekend.

Expected to deploy a front three comprising of Harry Kane, Heung-Min Son, and Dejan Kulusevski against the Saints, Spurs will be dependent on their full-backs to overload the attacking third in possession in a bid to sustain pressure deep into the opposition’s half on the pitch. Although Southampton’s full-backs in Kyle Walker-Peters and Romain Perraud are expected to remain astute in executing their roles efficiently, Conte will be looking to maintain significant possession in the opposition’s half whilst being wary of a counter-attack throughout the ninety minutes this Saturday.

A lethal threat on set-pieces, Ward-Prowse emerges as the Saints’ most likely goal-scorer against Spurs. With the hosts expected to dominate possession whilst creating a handful of goal-scoring chances, Southampton will be looking to remain solid in defence whilst working on exploiting the space behind Spurs’ wing-backs considering the opportunity. Expected to boast an attack combining pace and power, Hasenhüttl will be looking to physically dominate the opposition, whilst employing a moderate approach to the game on Saturday.

Spurs’ most prolific forward alongside Kane, the South-Korean winger is expected to remain amongst the mainstays of Conte’s starting XI throughout the season. Boasting a substantial goal-scoring threat alongside envious creativity across the attacking third, Heung-min Son will be key to the team’s chances of finding the back of the net this Saturday.

Expected to be heavily involved in defensive and offensive duties, Son will be relied upon to combine with the forwards this weekend. Although potentially facing a quality opponent in Walker-Peters at right-back, the South Korean is expected to get the better of the full-back; increasing his prospects of registering his name on the score-sheet this Saturday.

Arguably, Southampton’s most potent attacking threat, Ward-Prowse will be key to the visitors’ chances of securing a positive result this weekend. Having scored one and assisted two goals across both league meetings last season, the midfielder’s dead-ball ability alongside his prowess across the attacking third could potentially hurt the hosts on Saturday.

Capable of creating goal-scoring chances whilst frequently finding the back of the net, Ward-Prowse could exploit Spurs’ vulnerabilities in defence and midfield in their opening fixtures at the weekend.