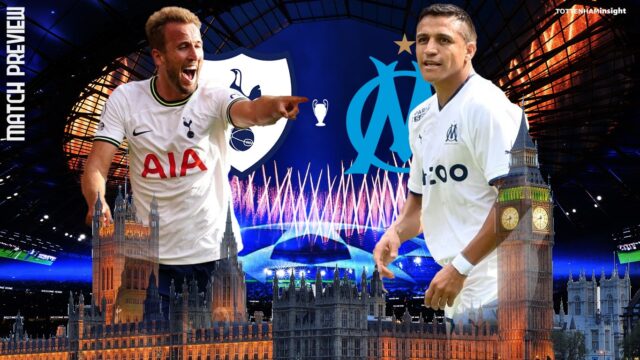 The latest edition of the world’s most exciting and intense competition returns for a brand-new season this midweek. The UEFA Champions League 2022/23 season starts on Tuesday 7th September. The draw took place a couple of weeks ago, and the group stages are set to commence soon.

Some interesting matchups are coming up, and one of them is Tottenham Hotspur who take on French giants Olympique de Marseille on Wednesday night at home.

Tottenham Hotspur have been in fine form in the league, winning 5 of their 6 games and drawing one, maintaining an unbeaten record in the league. They were by far the dominant side against Fulham on the weekend in their latest game, winning 2-1 at home in the London derby. The Lilywhites threatened to take the lead a couple of times in the first half, coming close to opening the scoring. Midfielder Pierre-Emile Hojbjerg then scored the opening goal five minutes from the half-time whistle with a well-taken finish after a good team move. Tottenham kept plugging away and were denied by a superb Bernd Leno in goal for Fulham time and again before Harry Kane scored a simple tap-in to give them a deserved 2-0 lead. Aleksandr Mitrovic scored late on for Fulham to give them hope, but Spurs held on for a nervy end and came away with three vital points.

They now turn their attention to the Champions League, returning to the competition after competing in the Europa League last season. Manager Antonio Conte has built a brilliant squad at Tottenham, and it has been evident from the quality of play seen so far. He has excellent squad depth and for the first time in many years looks capable of challenging the top clubs. The Italians will be eager to get started in Europe and will look to continue their unbeaten start to the season on Wednesday night.

Olympique de Marseille had a very dramatic start to their season, as their preparations for the new season were rocked by Jorge Sampaoli departing from the club just a month before the start of the new season. The Argentinian was a popular figure at the club and with the fans, playing attractive football and guiding the club back into contention for the league. However, disagreements with the board led to his departure, and the club hierarchy quickly identified Hellas Verona manager Igor Tudor as the suitable replacement.

The Croatian has done well so far with the signings and team provided to him, winning 5 and drawing 1 in the league. They are level on points with league leaders Paris St-Germain, who of late have dominated the league with their superior players. However, Lille’s 21/22 shock title win will have provided hope to the rest of the league that PSG can be beaten, and OM will hope to take inspiration from them and keep the pressure on the league leaders as much as they can. They were last in action against AJ Auxerre away from home, winning 2-0 in a very comfortable display in Auxerre. Goals from midfielder Gerson and new signing Alexis Sanchez gave them three points and a boost heading into a European fixture.

The Marseille squad is filled with big names, with the likes of Alexis Sanchez, Eric Bailly, Dimitri Payet, Jonathan Clauss, Cengiz Under, Nuno Tavares, and others all increasing the quality of the squad and their style of play. The fans will be hoping that they can carry this momentum throughout the season and challenge for as many trophies as possible. Marseille’s football has been impressive so far, and they could be one of the teams to watch this season. They have been drawn into a tough group alongside Tottenham, Sporting CP, and Eintracht Frankfurt. All teams have very good squads, and the fight for the top two spots in Group D will a very interesting one.

Rodrigo Bentancur and Cristian Romero returned to the starting lineup for Tottenham over the weekend, providing a huge boost to the Lilywhites. They were the only two main injury concerns in the squad, with the other two on the treatment table, Bryan Gil and Lucas Moura, who have been told by Conte that they will not feature in his plans for the campaign. Expect a strong lineup to be named for their first UCL game.

Marseille will be without influential forward Dimitri Payet, who is said to be struggling with a calf injury. Les Olympiens had a very happening deadline day, with deals for outgoing forwards Bamba Dieng and Cedric Bakambu collapsing. That has left the duo at the French club, but both have been excluded from the Champions League squad, meaning they will not feature on Wednesday.

The star player for Tottenham and England will once again be key for his team. Leading the line, he combined well with Heung-min Son and Richarlison on Saturday, and the Englishman is looking more dangerous with a plethora of quality attackers around him. He scored again in the Premier League against Fulham with a simple tap-in, but throughout the game, his vision and passing and linkup play on the counter impressed fans and pundits alike, and he will be expected to lead the line again on Wednesday. He has been viewed as one of the world’s best strikers for quite some time now and with him, on the team sheet, there is always a goal around the corner.

The Chilean signed on a free from Inter Milan and has settled in nicely in his new surroundings in France. He is no stranger to Wednesday night’s opponents, playing against them regularly in his years in England. He has hurt them in the past and will look to do so once again. The 33-year-old forward scored in his last game, coming off the bench to score against Auxerre, taking his tally to 3 goals in his last 3 games. He had a decent display on Saturday and came close to scoring a couple of times before a cutback from Matteo Guendouzi was put away with a good finish by Sanchez. He has the experience of playing in the Champions League multiple times, and Igor Tudor will be expected to start him on Wednesday, as Marseille could well use a forward of his class and experience on the big stage.

Marseille’s new manager Igor Tudor has been in the game for a long time but has been quite underrated. Last season, the Croatian was head coach of Hellas Verona, where he lead the team to their best finish in 9th place since their return to Serie A, and their highest points total. How did he do that? Simple, by making his team and players work harder than everybody else. The Croatian is a no-nonsense manager and his playing style somewhat resembles his nature. He drilled a sedulous and persevering mentality into his team, and the results were there to see.

Tudor’s tactical approach is similar to that of Marcelo Bielsa, where he wants a high-intensity game with a lot of pressing. His Hellas Verona team finished last season in first place for both challenge intensity and PPDA (Passes Per Defensive Action). PPDA is the number of passes per defensive action a team allows their opponents to make on average before they proceed to win the ball. Verona were miles clear of the rest of the league, and it was a decisive factor in helping them finish in the top half of the table.

Antonio Conte will expect a similar approach from Marseille on Wednesday night. It is a big stage and a big night, but that should not daunt the French team, and they will be expected to come out all guns firing, as they have nothing to lose, considering their dramatic start to the new season. Conte likes to keep possession of the ball, and Spurs could fall into Marseille’s trap when they are pressed high up inside their half.

However, the Spurs have much more quality than Marseille. Their passing and transitional play are much superior to that of the French club, and the Londoners look set in their way. They are the overwhelming favorites heading into the tie but will be wary of being complacent. Rotations will be expected with a congested fixture list, and Marseille will be hoping to take advantage of any weakness the Lilywhites show.

Conte will hope to play around the press, and their midfield with the likes of Yves Bissouma, Pierre-Emile Hojbjerg, Rodrigo Bentancur, and others will be key to controlling the play. Both will line up in similar formations with 3-4-2-1 the preferred setup for both managers, and it all makes up for an intriguing matchup, and the fans are rightly excited for what is set to be an intense game of football.