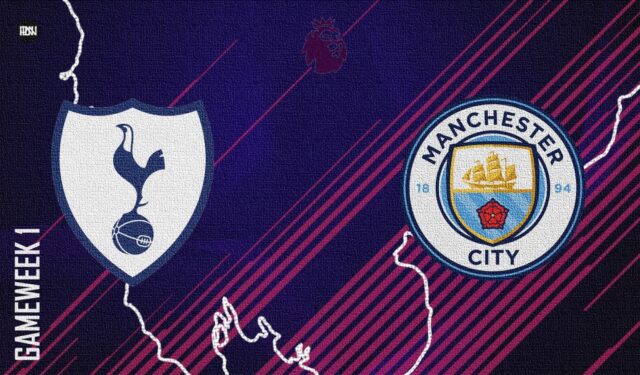 Pep Guardiola didn’t have enough time with his senior players in preseason friendlies as most of his first-team stars were out resting after their national team commitments. As a result, Pep heavily relied on Manchester City’s Academy players and EDS squad. Players like Claudio Gomes, Samuel Edozie, Cole Palmer, and James McAtee did impress in their limited chances and guided City to three sweet victories in the preseason.

Now that all of his squad members have finally sailed to the City training facility, Pep will be relieved from the pressure of selecting juniors for an important fixture. Likes of Aymeric Laporte, Gabriel Jesus, Kyle Walker, Phil Foden have all returned to the training facility along with their latest signing Jack Grealish.

Tottenham Hotspur, on the other hand, were without Harry Kane, Hugo Lloris, Giovani Lo Celso, and Pierre-Emile Hojbjerg to name a few. As a consequence, Nuno was able to register just a single victory in his preseason game. Now that the Portuguese tactician has all the stars at his disposal, Spurs’ faithful will be expecting a successful outing at the Tottenham Hotspur Stadium.

While Spurs have been much active in transfer activities, so far they have made a notable signing in Cristian Romero in an attempt to improve their backline. Their most important concern will be one of Harry Kane who has shown all signs pointing towards the departure from the club to play for their opponents in this particular matchday.

Manchester City will begin defence of its throne on Sunday 15th of August. Match will take place at Tottenham Hotspur Stadium and Kick off is scheduled at 16:30 HRS BST.

All the Tottenham Hotspur players are fit for the opening day. Harry Kane’s vacation is over and his test has returned negative, hence, he is available for the selection as the striker was also training in an individual capacity. But, we shall have to see whether if Harry Kane is willing to play against the team that has him on top of their wish list.

Bryan Gil has returned & trained with the first team and Cristian Romero is doubtful for a start considering his knock sustained in Copa America.

Manchester City will be missing Kevin De Bruyne following his ankle injury as the Belgian traveled to Barcelona and discovered the extent of his injury before coming back to the Etihad Stadium. City youngster Phil Foden will also miss the opening game because of the foot injury he sustained in training before the Euro 2020 final. Aymeric Laporte is back with the squad but he may sit out due to an insignificant training period. Bernardo Silva’s appearance will be in doubt because of the midfielder’s ongoing saga of exit from Manchester City.

Spurs were victorious over Arsenal by a thin 1-0 scoreline in their final preseason outing. Son Heung-Min was probably the best player out on the pitch and Dele Alli has done enough work to revamp his fortunes to start games for Tottenham again. Tottenham switched the shape midway to a 4-2-4 where Dele Alli used his exceptional positioning skills to join the forwards. Hojbjerg and Skipp were tasked to handle the pressure from opposition midfielders.

Coming into the match, the Spurs will use the same setup against Manchester City, and while attacking they will likely switch to 3-2-5 where Tanganga from right-back will switch to as a third centre-back and Reguilon will join the attack. Hojbjerg will stop the counters from the opposition and Skipp (if given the nod) will be tasked to win the second ball. His ball progression and passing ability has so far kept Harry Winks out of the starting lineup.

Ederson’s box will be crowded by Son, Alli, and Lucas while Dele is likely to drop on the edge of the box in responsibility to supply through balls. Bergwijn will be tasked to keep the width and apply pressure on Mendy. Reguilon will be asked to supply low crosses to his forwards present in the box and keep Cancelo busy in his defensive duties.

Pep Guardiola should use the same setup he did against Leicester City in Community Shield and other preseason games. Starting the game in his infamous 4-3-3, Pep’s side switches to 4-5-1 while defending in their half. This shape also allows them to quickly change their shape to a narrow 4-2-3-1 in transition. This allows Raheem Sterling to operate as an inside forward, similar to what Gnabry operates at Bayern.

Gundogan will be operating in his natural box-to-box role, being his usual self of a composed passer and ball carrier to keep the possession stat ticking in Manchester City’s favor. Fernandinho will be asked to distribute from the anchor’s position linking up defense and attack. Cancelo has shown enough flexibility to operate as an auxiliary midfielder allowing Pep to crowd the midfield to win at the number’s advantage. City tends to operate slowly and having Cancelo as a free man always keeps him as a passing option for his teammates.

Manchester City are clearly a tactically superior team here but they have always lacked persistence once they concede or on a low block. Jack Grealish will have to bring his A-game going into this fixture as Spurs are for sure going to frustrate City with their defensive work. In a way Manchester City performs in attacking set pieces, Jack Grealish should try and win free-kicks in important positions and let Mahrez and Gundogan take advantage of the dead-ball situations.

Super Korean Son HM will have to carry the entire team’s responsibility in an attacking sense. It will be his job to make runs, provide assists, create spaces, and probably score goals for the Lilywhites. Son’s ability to stretch the opposition’s defence will be required to expose the backline of Manchester City. Going up against either Walker or Cancelo, Son will be tasked to initiate an attack from the wings.

Used as a Centre Forward against Arsenal, if Nuno follows the same setup which was successful last time out; Son will be tasked to expose the space left behind Manchester City’s high line of defense. Ruben Dias and John Stones are some of the best defensive duos in the Premier League right now and exposing them will not be an easy task for Son. But, as he has performed previously against the sky blue outfit, he knows how to perform against the high line of the City’s defense.

Kevin De Bruyne is out, Phil Foden is out and Bernardo Silva wants to leave. This points towards the fact that Pep Guardiola will be trusting his new signing to start in the no. 10 role for the opening match. Making his Premier League debut for Manchester City, Pep Guardiola will be expecting Grealish to shine on his debut and make it memorable for all the City supporters. Already trained with the first team for the last few days, Grealish made his official debut for City against Leicester in Community Shield and looked as good as ever with the ball at his feet.

Nuno prefers a low block defense and Spurs could potentially have a double pivot midfield, Grealish will be asked to drag the opposition players away from their markers to open space for City’s forwards in Mahrez and Sterling. His ability to dribble past opposition defenders and create chances will be tested against a low-block Tottenham Hotspur.