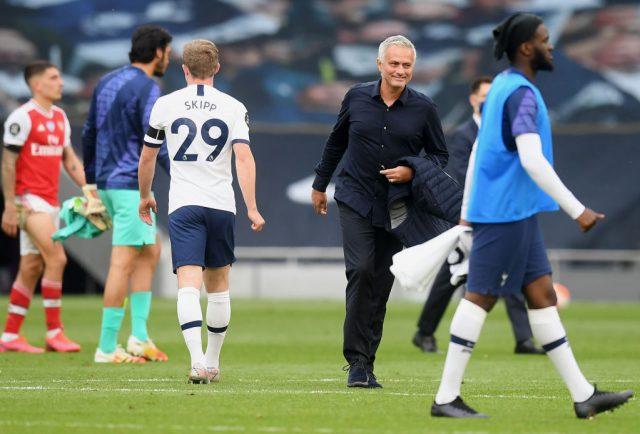 A City split into Red and White, two clubs split by just 6 kms, are split by 13 places in the Premier League Table, two managers that took their positions at about the same time last year. A game where anything can happen is played in a season where anything can happen, on a day where fans will finally be welcomed back into the stadiums, and what a game for Spurs to have their fans back as well.

A game where Predictions are thrown out the door, tactical Nuances are lost in the heart of passion for the game, and only those with the highest desire to win will come out on top.

What a difference a year makes in football, Spurs sit pretty at the top heading into Derby Day, while Arsenal find themselves in an unfamiliar position. Arsenal have had their worst start to the season in 39 years, an unwanted record that has Mikel Arteta chewing his nails.

A game that has a lot riding on it for both teams the North London Derby is not one for the Faint of Heart.

Jose Mourinho has not lost at home to Arsenal in all his time in management, he has Won 6 drawn 4, but he has never been on the losing side when he has faced Arsenal at home. Arsenal with 1 win in their last 5 Premier League games, Tottenham unbeaten in their last 5 Premier League games, So in a season where any team can come up trumps against any team, and Form Goes out of the Window which team will come out on top, and who could decide the outcome of the game.

Here are 5 Key Clashes that could decide the outcome of North London Derby:

Tottenham’s most creative Player, and the most creative Player in the league at the Moment is Harry Kane, and any Spurs attack almost always flows through Harry Kane and Spurs best chances in the game could come through their Striker. Stopping Kane has to be a collective effort, but one player that will need to step up for Arsenal if they are to stop Kane is Gabriel, the 22 year old Brazilian has already impressed with Crunching tackles and Sharp reading of the game has made him one of the Best defenders in the Arsenal squad.

Gabriel has to be on top of his game for this one, as even the smallest of chances and Tottenham & Harry Kane Will be all over Arsenal.

Aurier has been absolutely sublime this season for Tottenham and will be a threat on Sunday, if Arsenal aren’t careful of the Spurs Fullback bombing forward they could concede some decent chances to Spurs.

Keiran Tierney has been one of the shiny ray of hopes in a bad start this season and his role will be really crucial in dealing with the threat Aurier brings, he will also have to deal with the runs if Son and Bergwijn which could make it a bit of overload, but Tierney has shown that his positioning is Fantastic and he is capable of a physical battle, which is exactly what Aurier will bring a physical battle down the flank.

Harry Kane’s partner in crime Son Heung-Min has been absolutely amazing this season, popping up with the goals in Crucial games, his Goal against Manchester City allowed Spurs to sit back and defend their early lead and break on the counter attack.

Leno has had an up and down season so far after a spectacular display against Leeds, he was partially at fault for Wolves’ second goal last weekend, and he would be looking to learn from those errors. But if Leno has a poor game up against the Likes of Son, then the game will be fairly beyond Arsenal’s reach, but if Leno commands his box then Tottenham could have a tough time breaking down Arsenal.

One of the Spurs players that has gone a bit unnoticed this season has been Tanguy Ndombele, his presence in midfield has allowed Spurs to win as many games as they have setting up counter attacks for the like of Kane and Son and Bergwijn and Lucas Moura, his strength and dribbling on the ball makes it so difficult for opposition players to get the ball off him, which is why he wins so many fouls in midfield.

Elneny has had his critics this season and has missed the last few games for Arsenal after contracting Covid-19, his return will be a boost to the Arsenal squad however, he brings a level of defensive solidarity and aggression that is needed to be able to cope with a free-scoring team, but this game will be a massive test for Elneny’s abilities, because not many players have been able to take the Ball off Ndombele. And if Elneny manages to keep Ndombele quiet and sticks to him and doesn’t afford Ndombele any space, then Arsenal could have a really good chance of keeping the Spurs attack quiet.

The last Key Factor that could determine the outcome of this game is Jose Mourinho. He has taken this team to that next level, for which the quality was always there, But they needed an experienced manager that could get the best out of this group of players. Jose Mourinho’s approach to this game could determine how this game pans out, if Mourinho sets up defensively then they will be very hard to breakdown for any team in the league, but if He decides to have a go at the Arsenal defense then we could have an open end to end game on our hands. If Jose Mourinho gets the better of Arsenal again it would be the 7th time that he has won a game at home Against Arsenal. Mourinho has lost just once in the 17 times that he has come up against the Gunners, could he take that record to 18.

A loss to Spurs would rub even more salt into the wounds of Arsenal fans who haven’t scored a goal from open play since their win over Sheffield United at the start of October. What would make a defeat sting even more is the fact that Mourinho was one of the front runners for the Arsenal Job last year, but the Gunners failed to land him. This would also make an Arsenal win even more sweeter so Can the Gunners throw form out of the Window for Derby day and show up on the big occasion.