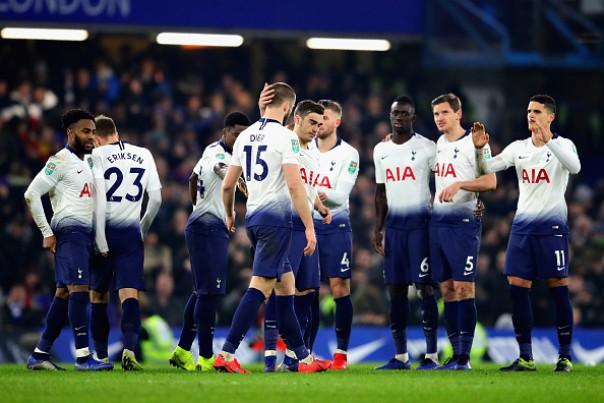 Spurs have even failed to win a single match in their last 4 matches in the Premier League and now face the danger of finishing outside the top 4.

Spurs have not lifted a silverware since their 2007 victory over Chelsea in the FA Cup. And in the course, Spurs legend Teddy Sheringham has warned the club that star players like Harry Kane, Alli and Eriksen won’t stick for long if the club does not start winning trophies.

Manager Pochettino has transformed Spurs into a competitive side but his side have always fallen short of and bottled chances to win silverware throughout his tenure.

Teddy Sheringham in an interview told(BBC): “Harry will want to win stuff. He will be wanting to play at the very top.

“It’s going to be a big factor with Harry that Tottenham are moving into a new stadium – but they have to win something.

“At the moment, they are nearly at the top. For me, that’s not good enough for Harry Kane because he is tops.

“There is going to come a time in Harry’s career when he is going to say: ‘I can’t be a nearly man any more. We have to go one step further for me to win things in my football career’

“You don’t get any younger in football and it’s amazing how quickly it flies by.”

Tottenham did not sign a single player in last summer window and were touted to have a tough time competing for silverware. And that came true as Harry Kane, Dele Alli, Erik Lamela, Vertonghen, Eric Dier and Kieran Trippier missed a major part of the season. Spurs held well till the injury to Kane and Alli came along which saw them get knocked out from the EFL cup semi-final and the FA cup in the same week.

Teddy Sheringham has said something that is very true considering the quality that Harry Kane possesses he will soon want to lift trophies just like every other player and if he does not see that happening at Spurs he will very likely move elsewhere to lift silverware.

Teddy Sheringham advises Harry Kane to weigh up his options

Sheringham nearly left Spurs for Liverpool instead of Man United