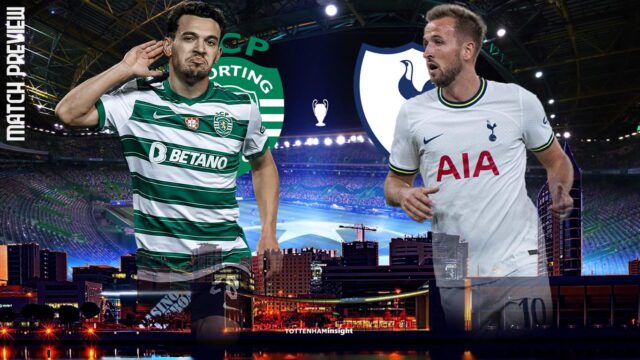 Sporting CP got their Champions League campaign off to an ideal start as they ran out 3-0 winners against Eintracht Frankfurt in their opening game last Wednesday. The Portuguese club was evenly matched up against the Germans but the hosts spurned several golden opportunities in front of the goal in the first half. The Green and Whites retained their calm and came out all guns firing in the second half. They were very clinical, in contrast to their opponents, and scored 3 well-taken second-half goals to claim the top spot in Group D after the opening round of games.

They followed that 3-0 win with another fine performance in the Primeira Liga, winning 4-0 at home to Portimonense. A first-half brace from Francisco Trincao followed by goals from Pedro Goncalves and Nuno Santos in the second half meant another decisive win. They continue their climb up the table with that win after a poor start to the season has seen them fall 8 points behind leaders Benfica.

But Sporting now direct attention to the Champions League as they play host to an in-form Tottenham Hotspur.

Tottenham Hotspur, like Sporting, have started their UCL campaign with a win over Olympique de Marseille last week. The 2-0 win was far from comfortable and the English side had to work hard, going into the break having not threatened the visitors much. They were handed a boost with a second-half red card to Marseille defender Chancel Mbemba, and from there on Spurs kicked on and dominated, with new signing Richarlison scoring a brace in the final 15 minutes of the game.

There were plenty of positives to take from the game for both teams, but Spurs came away with the important 3 points and now face table toppers Sporting CP in Portugal.

The Lilywhites were given a rest over the weekend as their clash against Manchester City was postponed as all football fixtures in England on the weekend were postponed paying respects to the late Queen Elizabeth II.

Sporting CP have some defensive woes at the moment, with Jeremiah St. Juste forced off with a muscular injury against Frankfurt which was followed by another injury-laden weekend as Gonçalo Inacio and Luis Neto were both taken off in their win against Portimonense. St. Juste and Neto are set to miss out from the squad against Spurs, but Inacio will face a late fitness test. Other than that, Sporting manager Ruben Amorim will have a fully fit squad to choose from. Former Spurs youngster Marcus Edwards could lineup for Sporting.

Tottenham Hotspur manager Antonio Conte has a very fit and strong squad at his disposal with only Lucas Moura the long-term absentee. Bryan Gil recovered to make the squad last week and could be in contention again on Wednesday.

Both managers prefer to play with a three at the back formation, with Sporting manager Rúben Amorim primarily using a 3-4-3 formation and Conte using a 3-4-3 or a 3-4-2-1 formation with Spurs.

Amorim is an up and coming manager, and has gotten his big break with Sporting in 2020 after managing the likes of Casa Pia and Braga and impressing in each stint. The young coach did not disappoint, leading the Green and Whites to their first league title in 19 years in the 20-21 season. Amorim clearly likes the saying ”attack wins you games, defense wins you titles”, with the Portuguese placing incredible emphasis on a strong defensive base in his team setup. That has led Sporting to become a very hard team to break down, and in his two full seasons at the club, they have conceded the least goals in each campaign.

Conte is in his first full season with Spurs, and is imprinting his stamp on the team. His philosophy is slowly beginning to take shape within the team and on current form the Londoners look capable of challenging for the big prizes. Third in the league, with the least goals conceded, Spurs like Sporting are looking like a tough team to break down. No surprises there, with Conte’s organisational rigidity and his penchant for positional awareness among his players.

Coming to Tuesday night’s game, many have predicted this to be a tight game. Although Spurs are the overall favourites with the quality of players in their squad, Sporting under Amorim are capable of springing a surprise. The Green and Whites will look to capitalise on any mistakes the Lilywhites make, and Spurs will have to be on their toes from the first minute. Amorim and his boys could be hampered with the absentees in their squad, given all of them are defenders, and Conte could well look to exploit that weakness. All this makes for a very interesting clash, and one that will be hard to miss.

Tottenham raised several eyebrows when they shelled out around £60 million to sign the Brazilian forward from Everton. However, Richarlison, despite not setting the stage alight, has proved to be a valuable addition to a team that is filled with talent from top to bottom. His two goals in the last UCL game were a testament to what he can do when provided the chance. He has worked hard ever since his arrival, and his efforts have impressed Conte who has benched the Swede Dejan Kulusevski and put his name in the hat to start important games. He will be expected to lineup behind Harry Kane with either of Heung-min Son or Kulusevski. Richarlison is a menace in the box, and Sporting will be wary of the Brazilian.

The Portuguese has been one of the shining lights of Sporting’s season so far, scoring 4 goals and assisting 3 in 7 appearances in all competitions so far. The 24-year-old has linked up very well with striker Marcus Edwards who has 3 goals and 3 assists himself, and the pair are a force to reckon with. Goncalves has yet to get off the mark in the UCL, but was again impressive in the win over Eintracht Frankfurt, and will be expected to start on Tuesday. Primarily an attacking midfielder, he has played much of this season on the left wing and is slowly adjusting there, creating spaces and scoring opportunities from the left flank.