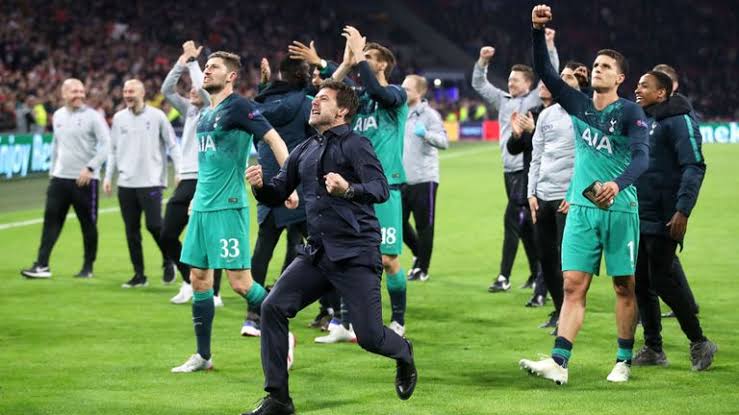 Tottenham Hotspur are through to the Champions league finals where they face their league rivals Liverpool for a all English showdown.

After losing 1-0 in the first leg and handing Ajax an away goal advantage it appeared Spurs were destined to be knocked out in the semi-finals. Spurs also lost 5 of the 6 last matches making a comeback tough to even think about.

After going 2-0 down at the end of the First half it appeared Spur journey was all set to end until Brazilian wonder-boy Lucas Moura scored brace at the start of the second half to make it 2-2 on the night, only for him to bag his hat-trick in the dying minutes and drive Tottenham to their first ever Champions League Finals.

When it appeared that Spurs will still fall short of one goal Moura struck once again in injury time to win the game for Spurs with just a few seconds remaining of the injury time.

Mauricio Pochettino was seen in tears lying down on the ground in total disbelief.

“We are so close to getting into the top four and on June 1 we will play Liverpool in the final in Madrid.”It is an amazing season, in our new home, and I think that this chapter we are going to extend until the June 1, it will be amazing to close the chapter playing the final.”If we win it will be an amazing book.”

“He was really clinical in front of goal. It was a magic night for him. It is so important that after five years we know each other.

“To achieve big things it is very clear that you need 25 players and you need to show respect.

“That belief in all the squad paid off. When Lucas Moura arrived, it was a difficult and tough moment, always we believed to push them to be better.

“Of course, it was a tough period for him but we always respected him and were honest, but look at today without Harry Kane… many people were talking about Sonny [Son Heung-min] but it was Lucas who scored three goals.

“Maybe with 11 players you can win some games but to be in the final of the Champions League you need 24 or 25. We were always honest with everyone because some games you will need to use them and need them to give their best.”

Pochettino abruptly ended his briefing with a “ciao” when asked whether Kane would be fit to face Liverpool. Before that, he paid a warm tribute to Klopp’s own shock troops.

“I want to congratulate Jurgen Klopp and all their players because I think they were amazing,” he added.

“I think they are heroes too and it is going to be an amazing final we are going to enjoy a lot.

“It will be an all English Champions League final for the first time after the 2007-2008 season where Chelsea faced Manchester United in the finals of the Champions League.