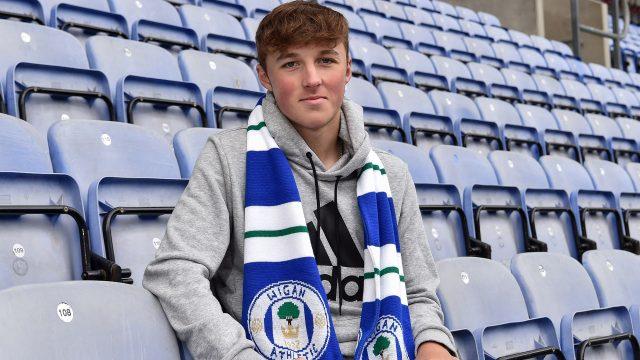 Tottenham have completed the signing of teenage sensation Alfie Devine from Wigan Athletic for an undisclosed fee.

The promising youngster is a member of the England youth team and will now represent Tottenham in a move that will go a long way to help Wigan in their financial battle with administration.

Devine was also an exciting player to watch at the DW Stadium with his performances for their under-18 side on their run to the FA Youth Cup, where they beat Tottenham’s youth side along the way.

The 15-year-old was with Liverpool before the Reds released him and was said to have caught the attention of Jose Mourinho’s side for a quite a long time now but has now sealed a permanent switch to North London.

“Devine, 15, has starred for England’s under-16 side on the international stage and was part of Latics’ record-breaking U18s this season as Peter Murphy’s side reached the quarter-finals of the FA Youth Cup for the first time in the club’s history. We wish Alfie well in his future career.”

The Lactics suffered relegation from the Sky Bet Championship on the final day following their 1-1 draw with Fulham, and are reportedly appealing a 12-point deduction they suffered for entering administration.

Tottenham Under-18s coach Matt Taylor said: “Alfie comes to us hungry to develop and make progress, just like the 10 young men who have moved up from our under-16s this year.

“It’s an exciting time for these players as they start this new chapter in their lives as full-time employees of the football club and begin to understand what’s expected of them, taking on board the DNA of Tottenham Hotspur.”

The next few years will be an opportunity for Devine to try and breakthrough into the Tottenham set up.

Thanks to all the players and staff and Wigan for the past 3 years an amazing club with amazing fans, now time for something new and delighted to have signed for @spursofficial ⚪️