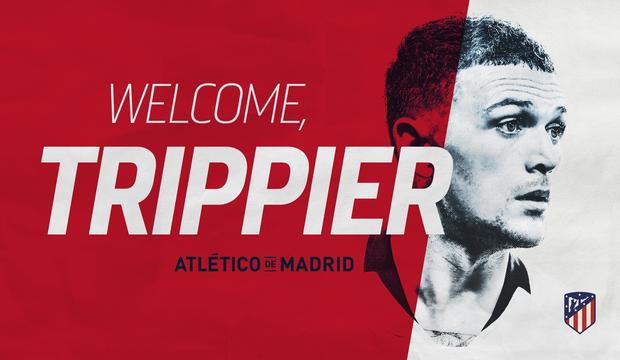 Tottenham full-back Kieran Trippier has officially completed his much anticipated move to Atletico Madrid, as the Englishman signs three-years deal with Spanish giants.

We have reached agreement with Atletico Madrid for the transfer of @trippier2.

We wish Kieran all the best for the future.

Atletico Madrid announced the signing by publishing the following on their official website:

“Atlético de Madrid and Tottenham Hotspur have reached an agreement over the transfer of Kieran Trippier. The 28-year-old has signed a contract for the next three seasons.

Kieran Trippier (born Sep. 19, 1990 in Bury, England) is a new Red & White player. Atlético de Madrid and Tottenham Hotspur have reached an agreement over the transfer of the full-back, who has signed a three-year contract.

With this signing, we add to our team a fantastic and experienced player who comes to us from the Champions League runners-up. A product of the Manchester City academy, which he joined at age nine, Trippier went on to join Barnsley and Burnley on loan, before signing for the Lancashire club in 2012. There, he made the Championship’s Team of the Year in the 2012/13 and 2013/14 seasons, achieving promotion to the Premier League in 2014. In his first season in the top flight of English football, the full-back played every minute of every game with his team.

One year later, Trippier signed with Tottenham Hotspur and went on to play 114 matches over the next four seasons, scoring two goals and providing 24 assists. Last season, he was a key player in the side that reached the Champions League final.

His performances at the London club earned him the right-back spot in the England national team. He made his international debut in 2017 against France, and since then has played 16 games and scored one goal. Trippier was England’s starting right-back in the 2018 World Cup, during which he was a constant threat thanks to his set pieces. Gareth Southgate’s side went on to score nine set piece goals during the tournament – the most ever in World Cup history – and Trippier was chosen to be in FIFA’s Best XI for the competition.

The Englishman is a versatile full-back who can also play in midfield and has a fantastic right foot.

Because of all this, we welcome Trippier to the Atleti Family and wish him the best of luck at his new home. Welcome, Kieran!”

Altetico were in search for a replacement for Juanfran, who they officially released last month, with their approach to bring in Nélson Semedo given off the cold shoulder by Barcelona. Though, they also have monitored Kieran for sometime, registering their interest with Spurs and they have now made their move. Napoli & Atletico are said have gone eye-to-eye to acquire Kerian, but Simone has won that race as Trippier will now be heading to Los Angeles de San Rafael to join up with his new teammates.

Pochettino will be left only with Kyle Walker-Peters and Serge Aurier as option for right-back, with the later linked with a move away from Tottenham as Bayern Munich are said to be interested in Frenchman’s signatures. Yet, Mauricio remains confident that Juan Foyth, nominally a centre-half, can play on the right.

Meanwhile, Atleico Madrid have now spent an incredible £170m on reinforcements this summer as Diego Simeone’s side aim to close the gap on Barcelona & City rivals Real Madrid.