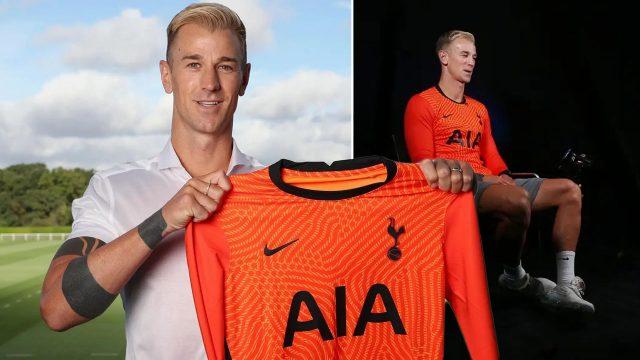 Tottenham have officially completed the signing of Joe Hart on a free transfer ahead of the 2020/21 campaign.

The England international joins Spurs having left Burnley at the end of his contract in June, and pens a two-year contract at the Tottenham Hotspur Stadium which runs until the summer of 2022.

Hart is expected to provide competition together with Paulo Gazzaniga for first choice keeper Hugo Lloris in the next two seasons.

And speaking after completing the switch, the former England No.1 thanked the club, while also adding that he has ‘a lot to offer’.

“Firstly, I just want to say thank you to the Club for seeing something in me,” he said. “No getting away from it, it’s been a difficult couple of years for me personally on the football field, but I feel I’ve got so much to give, I feel like I’ve got a lot of quality, a lot in the bank, but not much game time recently.

“I can only look at things positively. I’m ready to go. I feel like I’m starting again, and I quite enjoy that feeling. My body is certainly ready for me to start again. I’m ready to push and ready to get back to levels. I love the idea of European football, two games a week… it all excites me.”

The goalkeeper, who started his career from Shrewsbury Town before going to spend 12 years at Manchester City also talked about his experiences in the last few years having encountered a few set backs.

He explained: “They’ve been a process, something I’ve certainly not had to get used to, because I didn’t want to ever get used to it, but I’ve lived it, I’ve worked hard, kept the same standards I’ve kept throughout my career, right from Shrewsbury Town.

“You can’t help but get excited at this Club. Off the field, doing everything right, tremendous training ground, one of the world’s greatest stadiums, some of the best players you can get in football. I think we can work together as a team and work together as a unit and the sky’s the limit, it has to be.”

Hart won two league titles, plus an FA Cup and two League Cups at City, while also being capped 75 times by his country.