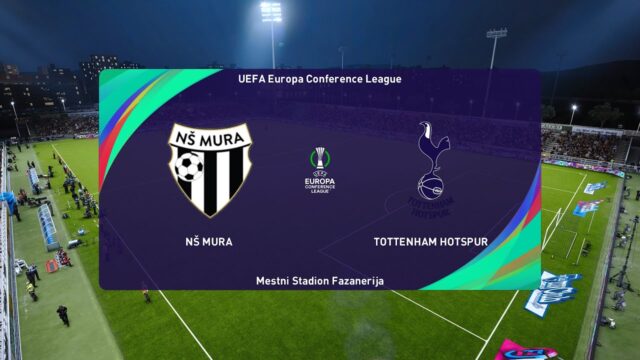 After Antonio Conte’s first home win against Leeds United on Sunday, Tottenham Hotspur travel to Slovenia to face NS Mura in the 5th round of the UEFA Europa Conference League. Mura sits at the bottom of the table with all 4 losses, including a 5-1 loss against the traveling team. Tottenham Hotspur on the other hand are coming off a win against Vitesse on Italian’s first managerial debut for the Spurs. The match against Mura will be Italian’s 4th game in charge.

Lilywhites position in the UEFA Europa Conference League table does not look comforting for them to risk it by rotating players. Conte will try to give players the confidence and will not rotate the squad as much as he is still trying to find his starting XI. With Cristian Romero being injured due to international games and Lo Celso supposed to be back by early December, the midfield will be of Hojbjerg, Harry Winks & Lucas Moura, with the latter having a fantastic game against Leeds. Dele Alli who scored the last time both sides met, will hope he starts if Conte decides to rotate. Ryan Sessegnon, Bryan Gil, Steven Bergwijn, and Matt Doherty will hope they get some minutes under their belt.

Mura placed last in the Europa Conference League table will look to play spoilt sport. No injuries on the list for them. They would be staring with their top scorer of the season Amadej Marosa. With Lorbek and Horvat in the midfield, they will be trying to change the course of the season.

For Tottenham and Antonio Conte, it has been a bumpy start and he is still trying to figure out his starting XI. Lucas Moura who had an outstanding game against Leeds United with an assist and a free-kick won in a dangerous position which helped them in the comeback will have a strong point to start again. Emerson looked good in offense but looked sloppy in defence and with Matt Doherty, in competition, it will be interesting to see what the manager does.

Harry Kane and Son will continue to look for more goals as the pair has been very quiet compared to last season. With Conte praising Kane in his post-match interview, it will be interesting to see Kane play as a lone striker with Moura and Son helping him to get him back among the goals.

Defence was much tested but with Dier, Tanganga, and Davies at the back it gives wings more freedom to attack with a 3-4-2-1 formation. Conte will trust Hojbjerg and Winks/Alli to control the pace of the match while Moura and Son along with the wingbacks to use opportunities of counterattack to their advantage.

Mura with no wins in the last 6 games and not maintaining a cleansheet in the last 7 games will have an uphill task against a passionate Spurs side under Antonio Conte. They will lineup in a 3-5-2 formation with a more defensive mindset. Marosa will hope he adds to his tally of 5 goals this season. Mura are 5th in the league right now with a negative goal difference, which says a lot about their defensive problems. Against stronger opposition, they like to sit back and use counters to come back into the games. They will be looking to do the same against Tottenham. Their wingbacks Sturm and Kous are known to play more of a defensive role with Lotric having 3 goals so far will have a responsibility to create chances in the midfield.