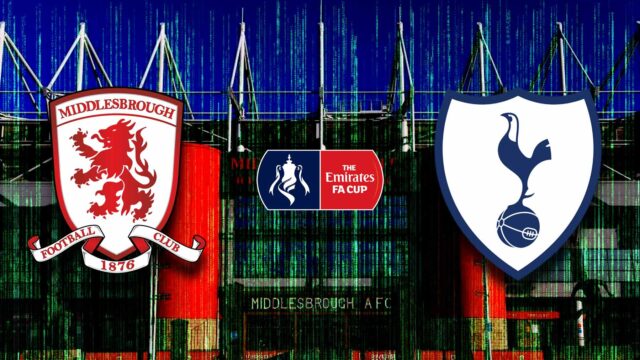 Middlesbrough welcome Tottenham Hotspur to the Riverside Stadium in the 5th round of the FA Cup with the hosts wanting to cause yet another major upset after knocking out Manchester United in the previous round on penalties. Chris Wilder’s men will be hoping for a similar result against another PL opponent who comes into this game on the back of a rampant 4-0 win over Leeds United. On paper, the two teams are levels apart from each other but the magic of the FA Cup has seen plenty of big teams fall prey to smaller teams.

Chris Wilder certainly has the Premier League experience and faces familiar opponents against whom he was victorious 3-1 during his time at Sheffield United in the 2019/2020 season. He managed to lead his newly promoted team to an impressive 9th place finish that very season. This time around it won’t be easy with Spurs looking solid under Antonio Conte though there have been some underwhelming performances. Both the teams have used a 3-5-2/3-4-3 hybrid system under their current managers which will certainly be a good tactical battle to watch.

There will be no injury returns for Spurs with Japhet Tanganga, Oliver Skipp, Rodrigo Bentancur and Lucas Moura all ruled out for the game. Meanwhile, for Middlesbrough, Marc Bola will not be involved after being ruled out for a knee injury and Matt Crooks returns from a suspension.

The similarity in systems makes it a little easier for Chris Wilder to find solutions and mastermind a victory in front of 30 odd thousand home supporters. Deploying a man to man press all over the pitch when out of possession will be key to not let Spurs have any edge in the game and the pressing ability of Arsenal loanee Folarin Balogun and Sporting CP loanee Andraz Sporar will be crucial for Boro. During the transition from defence to attack, Wilder will be looking to instruct his forwards to attack the spaces on the wings left by the overlapping Tottenham fullbacks.

With Hojberg the only natural CDM fit for Conte, the midfield battle between the players of both teams will be a spectacle to watch. Marcus Tavernier, Jonny Hawson and Matt Crooks will be looking to outnumber the Spurs midfield of 2 by creating 3v2 overloads among themselves or linking up with their wingbacks to create these situations.

PLAYERS TO WATCH OUT FOR

The Slovenian forward who is the joint top scorer this season will be hoping to continue his fine form having scored 8 goals in 23 appearances in the Championship this season. He is averaging a 0.5 xG per game and 2.3 shots per match which look really good and he will be a major threat to the Spurs’ mistakes prone defence.

It goes without saying that Harry Kane will be the biggest attacking threat on the pitch with the English Striker scoring 3 goals in his last 3 PL games. The English striker is averaging an xG of 0.48 per match and 3.37 shots per match this season in the Premier League. His partnership with Son will be crucial for Spurs to break down a resilient Middlesbrough defence having broken the all-time record for combining the most goals in the PL with the previous holders of this record being Didier Drogba and Frank Lampard.