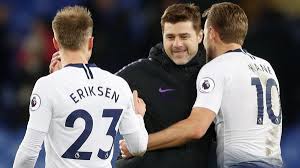 Tottenham delivered an outstanding performance once again as they dominated the game against Bournemouth and hammered 5 against them.

With that victory Spurs now sit in the 2 spots dethroning City to faced yet another defeat away to Leicester City. Tottenham lead City by 1 point and sit 6 points behind leaders Liverpool.

After the match, Pochettino said he does not want the team to get carried away with the title challenger talks. Son again scored a brace and Kane and Eriksen got on the scoresheet. Kyle walker peters assisted 3 goals to become the first player to do so after 2003.

Talking after the match Pochettino said, “I’m trying to keep balance in my emotions,” said Pochettino to Sky Sports after the game when asked about moving ahead of City in the table.

“The way that we work, is paying back now. It doesn’t surprise me. We only focus on us, not the opponent. It doesn’t mean too much to us to be second or third. The most important position is when you finish in May.

“Now the challenge is to keep this level – it’s going to be tougher as when you are there everyone wants to kill you. It’s tougher the higher you get. We need to keep humble and work hard. The next game is always more difficult than the one before. If we can keep our level then maybe we can talk about a title challenge at the end of the season.”

“The one thing we’ve kept is our belief and positivity. We have created a bubble. We are in this position as we have worked a lot – the staff within the club deserve big credit. We’ve done things to make us very proud.”

Tottenham next host Wolverhampton and will look to continue their impressive form.