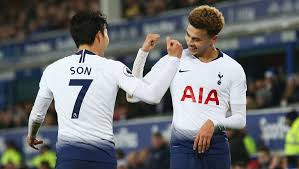 So where are those people who said that it would be either a draw or hardly a 2-1 win for Tottenham?

There were a lot of talks of Everton’s midfield and attack, and that it would be a tough night for Tottenham. Well, it was, but not much enough that we expected. The Toffees did produce some good chances and even scored two, but their efforts were simply dwarfed by those of the Lilywhites who not only displayed pure attacking football but also outscored them by hitting the back of the net six times!

Everton got the breakthrough through Theo Walcott in the 21st minute as he sent the ball past Lloris after receiving a cross from Calvert-Lewin. Just two minutes after the first goal, Calvert-Lewin came with another effort and scored through a header although the goal was disallowed as Lewin was found guilty of pushing Davinson Sanchez while he was leaping to head the ball.

Then came the moment of disaster for the Toffees as Pickford’s mistake or Zouma’s blunder, whatever you call it, caused to prove costly for them. Son cleverly won the ball, leaving the opposition’s goalkeeper and defender collide with each other, and struck it comfortably to equalize for his team. Spurs had got their momentum back after Son’s leveller and then ten minutes before the half-time, Dele Alli gave them the lead by scoring through a low shot.

The home side could have managed to make a come back but again, whatever you call it, Pickford’s inability or bad luck, they gave just another simple scoring opportunity to the visitors. Just three minutes to go for the half-time whistle, Trippier’s freekick hit the right low post and Pickford couldn’t manage to get his hands upon the ball which after striking to the post bounced in reverse direction and found a standing but still lucky, Harry Kane who coolly sent it inside the goal.

The second half started and Spurs continued their demolishing practice upon the home side as Christian Eriksen scored from a sweet right-footed strike. When hopes were getting down for the Toffees, Gylfi Sigurdsson tried to bring back his team in the game by scoring in the 51st minute. But Son killed the hopes for them when he again took benefit of another defensive error, this time committed by Michael Keane, and easily beat Pickford in a one-on-one for the fifth goal.

Tottenham were not finished here as Kane tapped in home another goal after receiving a cross from Son. The final scoreline read Tottenham 6- 2 Everton. The visitors inflicted the heaviest defeat the home side has suffered under the present manager.

And with this thumping win, the Lilywhites move closer to the second-placed Manchester City with the gap between them now reduced to two points as the Citizens suffered a shocking home defeat to Crystal Palace.

Let’s have look at players ratings.

Man of the Match: Heung-Min Son

Mauricio Pochettino: “I’m so pleased, so happy. We came from a really tough game on Wednesday against Arsenal and today the team was so fresh with plenty of energy. We played very good football. It was fantastic. When you play that way you must be very proud.”

Marco Silva: “We feel really bad, as we should. We wanted to achieve something different and tried to give our fans different feelings. “We started well and the second goal (disallowed goal) is a key moment in the game. But we kept making mistakes and you can’t do that against a team like Tottenham.”

Next for Pochettino’s men is another Premier League outing, this time against AFC Bournemouth at Wembley.

Eddie Howe who has also been tipped to replace Pochettino at Spurs if the Argentine leaves for Manchester United, had recently brushed off all the talks of him linking with the Lilywhites.

His side has been doing great in the top flight since the day they were promoted and now stand at 8th position with 26 points in the league rankings. They are never an easy side to play against but this year they haven’t been able to turn around big tables as they did in the previous one. They have tasted defeat against all the big sides and in fact, before winning their last game which was against Brighton, they had suffered eight straight losses.

Still, Eddie Howe’s men cannot be and shouldn’t be underestimated. The clash will take place following the Christmas Day, on 26 December 2019 and the venue would be, Spurs present home ground, Wembley.