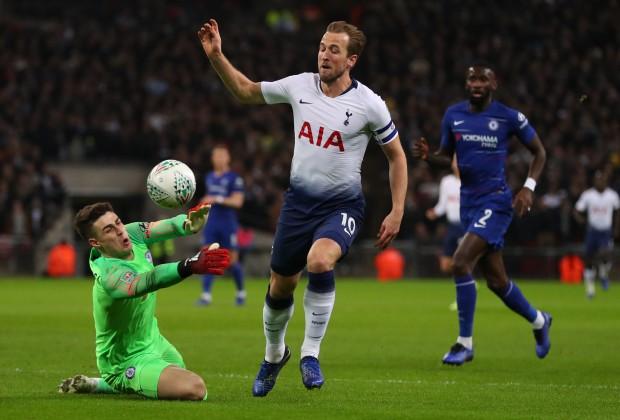 The first leg of the Carabao Cup saw Tottenham emerge victorious by 1-0, thanks to a 25th-minute penalty scored by Harry Kane, and take a one-goal lead to the second (away) leg.

It would be wrong to say that Chelsea weren’t the superior side last night even though they couldn’t capitalise from their chances. The Blues came close to scoring on three occasions but were unlucky to get the final outcome due to the presence of goalposts and the man standing between them. Paulo Gazzaniga produced another superb performance for Spurs as he made some unreal saves. In the 40th minute, he acrobatically jumped to lead his right-hand to reach the looping ball struck by Hudson-Odoi and tried to deflect it over the bar, though, the ball instead hit the crossbar and went to the feet of Toby Alderweireld who thankfully cleared it away. He made another superb save when he deflected away Kante’s powerful bending shot in the starting minutes of the second half.

Chelsea’s another effort was cancelled out when Kante’s shot hit the left down posts and ended up being a goal kick.

It was not just Gazzaniga who had a great night as the Blues’ shot-stopper Kepa Arrizabalaga also had his moments in the game, one of which was in the second half when he flyingly saved Harry Kane’s pacy cannon shot hit from distance. But much to his disappointment Kepa was also the reason behind his team’s only setback in the game as he conceded a penalty in the 25th minute while trying to stop a progressing Kane into the six yards box.

The referee took the help of VAR before calling it a penalty and booking Kepa for the committed foul as he wanted to check if Kane was offside or not.

Overall, both the teams did well to put on a show of competitive football, however, Chelsea had the larger share in the ball possession and also created attacks three times more than the Lilywhites did.

The duo of Kante and Jorginho was once again crucial for the Blues in bridging the attack and defence, but the star man was Eden Hazard. The Belgian ran the show all over the 90 minutes for his side as his dribbles and passes were constantly aimed to threaten Tottenham’s defence.

For the home side, apart from Gazzaniga’s heroics, it was Rose and Kane who were the most influential players.

Pochettino would be very happy with the result as his side not only scored the only goal but also kept a clean sheet. We all know how it helps in these kinds of two-legged knock out matches when we don’t concede an away goal in the home leg and then visit the opposition’s site for the second leg with a lead in our hands.

The two sides will meet at the Stamford Bridge which is Chelsea’s home ground, for the second leg of Carabao Cup semifinal, on 22nd of January.

Let’s have look at the player’s ratings.

Man of the match: Danny Rose

The Lilywhites will be back in the Premier League action, against another English heavyweights, this time the Red Devils who have gotten a rebirth under newly appointed caretaker manager, Ole Solksjaer. United have all the five matches under Solksjaer while scoring 16 times. They rank sixth in the league and three points below Arsenal.

Tottenham sits at the third position in the table, six points behind leaders Liverpool and will host Manchester United on 13th January.

Chelsea ranks fourth in the league and will host 15th placed Newcastle United on 12th Jan.

Mauricio Pochettino: “I don’t like it [VAR], today we got the benefit but watching the World Cup and La Liga – no-one is happy. To get the benefit is nice but I’m not happy to win the game like this.

“I prefer the technology but in a different way and to be clear in the way we use it. I am pro-technology as you can’t stop the evolution. When are you going to use it? I don’t think it’s clear – before we use it all clubs need to agree with ideas. If not it’s going to be difficult.”

Maurizio Sarri: “I saw the video from our camera a few minutes ago, it was offside. Our camera was in line with Kane, and it was offside, but it’s not important.

“With the head, it’s offside. But it’s not important. It was important that the linesman stopped the run, he didn’t follow the ball, so he had a big influence on our defenders, and at the moment I think the English referees aren’t able to use the system.”