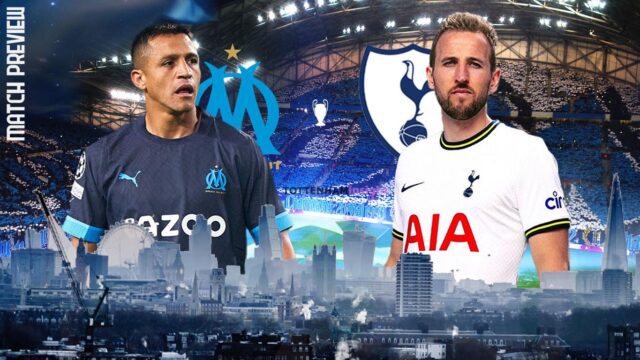 It’s going straight down to the wire in the mouth-watering final matchday clash in Group D of the UEFA Champions League. Tottenham Hotspur travel to Marseille with the qualification of both teams still hanging in the balance. Conte’s men are top of the group but are just two points ahead of fourth-placed Marseille and a point above Frankfurt and Sporting CP.

Even a draw can send the team from London through to the knockout stages for the first time since the 2019-20 season. While Marseille, on the other hand, have no excuse but to get maximum points from this must-win game to qualify for the next round. A victory would also break Marseille’s 12-year-old winless streak against English clubs.

Spur’s injury list more or less remains the same. Richarlison (calf) and Dejan Kulusevski (hamstring) are yet to recover from their respective injuries and are deemed to be long-time absentees on Tottenham’s treatment table. Argentinian centre-back Cristian Romero missed Tottenham’s 3-2 win over Bournemouth on the weekend but he’s likely to return from fatigue related problems and take the flight to Marseille on Wednesday.

Manchester United loanee Eric Bailly is set to miss the final group stage game with an injury. Centre-back Samuel Gigot is eligible to play after serving a domestic suspension but may not start over on-form Sead Kolasinac in the team sheet. The fierce London rivalry will be pretty much alive in Marseille as well with many former Arsenal players like Kolasinac, Alexis Sanchez, Guendouzi and Nuno Tavares all set to face their ex-rivals hoping to come out on top.

Antonio Conte is expected to go back to the drawing board and resort to his familiar 3-4-3 system after his nail-biting win against Bournemouth highlighted the flaws of the erstwhile 3-5-2 formation. The Italian, however, would be keen to see his side build the momentum and clinch a top-place finish but a draw wouldn’t be all that bad for the Lilywhites. Tudor’s men, on the other hand, will look to test Tottenham’s shaky defence in this must-win game from the first whistle with the whole of Stade Velodrome cheering them on!