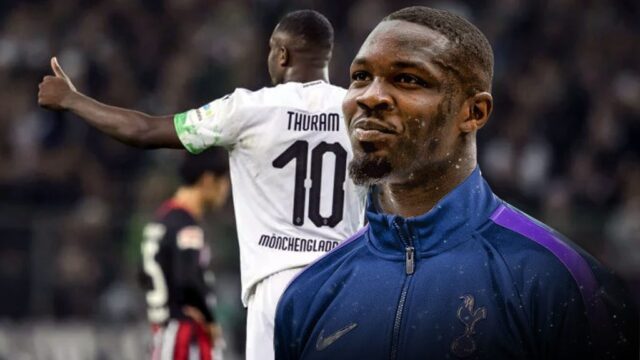 Tottenham Hotspur will be the busiest club in the transfer market this year as they look to appoint a new manager as well as bring in new players after their talisman in Harry Kane made his desire to leave Tottenham clear to the hierarchy. To that end, Tottenham Hotspur are closing in on their first signing of the summer in Borussia Monchengladbach forward Marcus Thuram.

Daniel Levy is not planning on letting on Harry Kane go without a proper replacement for the Englishman. Although it is nearly impossible to bring in somebody who can replicate Kane’s goal-scoring numbers, Spurs could bring in a young player who could eventually fill that vacancy.

Moreover, Fabio Paratici, who was appointed as the new director of football at Tottenham, is keen on signing the up & coming young players in Europe. Thus, Spurs have made contact with Gladbach forward Marcus Thuram, who could become the club’s first signing of the new season.

Tottenham finished 7th in the League table at the end of the season and will play in the inaugural edition of the Europa Conference League. This is an attractive proposition for any star striker in Europe. Thus, it would be advisable to sign young forwards to whom the club can sell their long-term plan while Spurs also have the advantage of offering attractive wages.

Thus, Marcus Thuram fits the bill for this job offer. The 23-year-old has been an underrated star in the Bundesliga for the last two years. Since he joined Borussia Monchengladbach from second-tier French club EA Guingamp in 2019, Thuram has been involved in 46 goals in 79 appearances for the German outfit. To put things into perspective, the Frenchman contributes to a goal once in every two games for Gladbach.

To add to this, Thuram was also second this season in the Bundesliga for a percentage of aerial duels won, only behind Bas Dost. Thuram is currently averaging 2.3 aerial successful duels per 90 minutes, as his 6’4 stature is a menace for most defenders. Despite his aerial prowess, Gladbach does not use the Frenchman for his hold-up play as they prefer using his vision and pace as an inside forward. Thuram started his first season with the German club in a two-striker formation, where he played up top alongside Alassane Plea. The two worked wonders between each other, however, this partnership would not continue into the current season as Thuram was shifted out to the left-wing.

The 23-year-old has excelled in that role as he has managed to get double figures in both assists and goals (11 goals and 12 assists) in the Bundesliga this season. He has averaged 2 successful dribbles a game, while he is also taking 2 shots on target per 90 minutes.

This has caught the eye of Tottenham, who are planning for a season without Harry Kane next season. Should Thuram join Spurs, he could be used in a two-striker formation alongside the energetic Heung Min Son, who is an incredible partner for any striker upfront. While both have the pace and the guile to work in a two-striker formation, they complement each other perfectly. While Son has the ability to run behind the opposition defence, Thuram has the build to hold up the ball or head the ball into Son’s direction.

Even if Tottenham set up with a false nine formation or buy a new center-forward, Thuram is an extremely valuable asset on both wings as he has shown in his current season at Gladbach. Fabio Paratici is keen on signing the Frenchman who is currently selected for France’s Euro 2020 campaign.

When could Tottenham complete the deal for Thuram?

Tottenham are said to be close to agreeing on a deal for the 23-year-old but the player wishes to complete the move only after the Euro 2020 campaign. ‘‘For now, I’m focusing on the France team and the Euros.

‘When I get out of the Euros, we’ll see what happens.’ – said Marcus Thuram when he was asked about his future a month ago.

This could be a problem for Tottenham who were planning on signing Thuram before the Euros as they understand that the player’s value might rise should he have a good Euro 2020 campaign. However, given that Gladbach are looking for funds, they might cash in on the player for a reasonable fee this summer.

Tottenham are keen on signing the Frenchman soon and it won’t come as a surprise to many should the player become Tottenham’s first signing of the summer while the club are also working on appointing Paulo Fonseca as the new manager of the club.