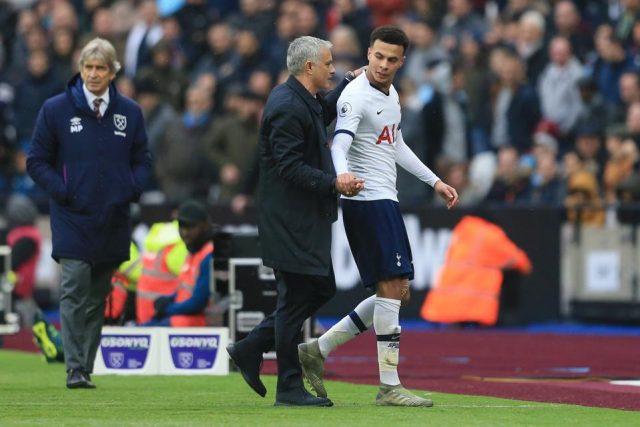 Dele Alli is the latest player to receive the Mourinho treatment. Over the years of his elite and successful managerial career Jose Mourinho has made it somewhat of a habit to alienate players who do not fit his thinking and coaching style.

Instead dealing with tricking situation like poor form, bad behavior and attitude problems inside the dressing room and on the training ground, Mourinho chooses to call out his players in the media and scapegoat them for these situations.

The Alli situation is no different. Right from calling him a ‘lazy’ player on the training ground to subbing him off at the half-time. During the game he was not even the worst player on the pitch. Harry Winks played 14 minutes more than him but still ended with 0 tackles & interceptions and created no scoring opportunities teammates. At the time of writing, Alli has not played a single minute of football since the opening day fixture.

This not the first time Mourinho has feuded with his own players:

Before Dele was target of Jose, it was the club’s record signing Tanguy Ndombele who took a lot of unnecessary criticism from the treble winning manager with Inter Milan. Ndombele started the season in good fashion even managing to score on his debut. The subsequent departure of Mauricio Pochettino and Mourinho’s arrival saw the French International drop down in the pecking. Before the Boxing Day fixture Ndombele had reportedly suffered an injury but Mourinho claimed that “ He is going to be training normally so I cannot say he is injured”. And it was pretty evident from every game Ndombele played he looked fit which in turn resulted in disappointing performances in the next games. Since the start of 2020-21 season Tanguy has looked fit and played a part in every competitive fixture which indicate that he may be an important of Spurs’s future.

After being crowned the world’s most expensive player back in 2016 Paul Pogba thought he had the world at his feet. He was touted as the player who win bring back the glory days back in Manchester. None to say the least he and Mourinho did not have the best of times together and the pair often clashed during his Mourinho term at The Red Devils. Tensions mounted between the United manager and Pogba was relieved of his duties as vice-captain weeks after he was appointed at the position. Mourinho had a spat with Pogba during an open training session at Carrington and was not a fan of his social media “acts”.

When Jose was back at Stamford Bridge for his second tenure, Kevin De Bruyne only made three first-team appearances during his two years efore leaving to join Wolfsburg in 2014. The midfielder quickly fell out of favour for reasons which were revealed by De Bruyne. He recalled the meeting being humiliating as the former Blues boss Mourinho battered him. In the end De Bruyne emerged victorious after making a switch to Ethiad stadium later and is currently one of the best players in the game.

When you go against an icon of the game & a world winning captain you can expect the world against you and that’s exactly what Jose came to know at his term at the Madrid dugout. The Portuguese manager lost not only the support of the club but also his dressing room. After a major injury the previous season Mourinho opted to drop the club veteran in favour of Diego Lopez during his final season in charge at the club. Several players like Ramos, Pepe, Ronaldo expressed their anger and gave an ultimatum to Real Madrid president Florentino Perez. At the end of the season Mourinho lost his job and Casillas went on to lift a Champions League trophy the following campaign.

These were some of the players that Jose had alienated at his glorious tenure of clubs like Madrid, Porto, Manchester United & Chelsea. But these are the same methods which he applied at his first tenures at Chelsea & Inter Milan. Many of the players like Terry, Drogba, Lampard, Zanetti, Eto’o have maintained that his style management helped them to improve their gameplay and made them mentally tough. It feels like this syle of Jose has been outdated. Guardiola, Klopp, Pochettino,etc have been known for their excellent style of offensivde play and great man managers are the new breed of coaches and they have replaced the old ideologies of the game on the field and off it too.