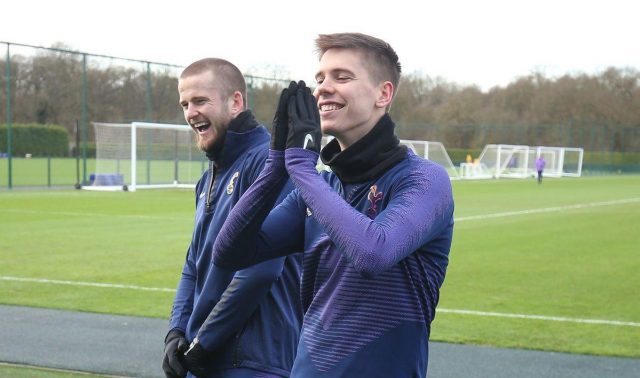 Juan Foyth has struggled to find gametime under Jose Mourinho, having made just seven appearances for the club this season, after falling down the pecking order and looks set to leave north London in the upcoming window.

Foyth injured a meniscus of his right knee last month, and as a result has not featured for the Lilywhites since the restart. However, Spurs’ released pictures of the players in training ahead of their final game on Sunday, with Foyth featuring prominently.

Spurs faithful took to social media expressing their delight at the return of the youngster, with many asking for a start for him against Crystal Palace at the weekend.

Getting set for our final game of the season 💪#THFC ⚪️ #COYS pic.twitter.com/hcn22MLlgW

But fans are well aware that considering the Argentinian’s falling out with Mourinho, it is unlikely that Foyth will make an appearance and these pictures could be perhaps his last shots at Tottenham.

Tottenham’s academy graduate Tanganga has been one of the club’s biggest positives this season, and has made eleven appearances under Mourinho so far. The 21-year-old is expected to sign a fresh contract, following Olivier Skipp and Eric Dier who have already signed contract extensions.

Foyth has now been placed behind Tanganga in the pecking order, and with the latter signing a new contract, Foyth will be looking to make a move elsewhere.

The 22-year-old is definitely not short of suitors, with Barcleona expressing their interest in the player alongside Marcelo Bielsa’s Leeds United, who are looking to sign him on loan to strengthen their squad. With Ben White departing, Foyth will be the perfect replacement for him in Bielsa’s system.

No, loan him out. He is a good player to have as a sub or even keep for the future. Could be a good career ahead if he had game time.

hope to see foyth on loan so he can develop. He’s top class.

Foyth seems certain to move. CCV will depart. Think Jose sees Tanganga more as a FB for now (can play right or left).