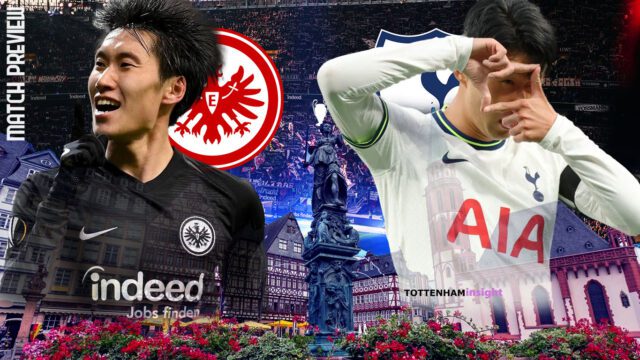 The UEFA Champions League is back in action this week as we resume the fiery group stage round of fixtures. This week sees Tottenham Hotspur travel to Germany to take on Eintracht Frankfurt.

Eintracht Frankfurt have had a very decent start to a tough Champions League Group D. They gave Sporting CP a tough time in their first game, but were guilty of missing scoring opportunities and were punished by the Portuguese side as they ran out 3-0 winners with a clinical second half performance. However, the German club did very well in their second game to bounce back, beating Marseille 1-0 away from home to get three deserved points and kickstart their UCL campaign. They now face formidable opposition in Spurs, who themselves have not had the best starts to their European season.

Frankfurt were last in action in the Bundesliga when they defeated surprise league leaders Union Berlin 2-0 at home. First-half goals from Mario Gotze and Jesper Lindstrom ensured the hosts had a healthy lead and a second-half red card did not hamper them from taking all three points. That win moved Frankfurt up the league table as they now sit in 6th place, just three points behind leaders Union Berlin and a point behind Bayern Munich. Die Adler are in good form, having won 4 of their last 6 games and will welcome Spurs in good spirits after a brilliant win on Saturday.

Tottenham Hotspur did not have the same luck as Eintracht, losing a very important game in their North London Derby against Arsenal on Saturday. The Lilywhites were completely dominated by the Gunners and a second-half red card to Emerson Royal did not help their cause as the Gunners ran riot at the Emirates stadium. Manager Antonio Conte was furious about the refereeing decisions and called for better use of VAR. He and his boys will have to shake off that disappointment now as a packed schedule allows them almost no time to dwell on past mistakes. They have to now prepare to face a buoyant Frankfurt team in Germany on Tuesday night and will look to improve in certain areas of the pitch. Spurs have had a similar start to Frankfurt in the Champions League so far. Both teams are level on points heading into the game and both will be hoping to come away with the maximum points.

Eintracht Frankfurt’s Randal Kolo Muani received a red card in their last game in the Bundesliga, but his suspension will not apply to European games meaning he will be available for selection on Tuesday night. Jerome Onguene was signed in the summer but has not made a single appearance for the club so far due to a hip injury and his suffering is set to continue as he is still recovering. Midfielder Kristijan Jakic is also expected to miss out after picking up an injury while on international duty.

Tottenham Hotspur also have a couple of notable misses, with forward Dejan Kulusevski still doubtful after missing the North London Derby. Lucas Moura has a calf issue and will be expected to be ruled out from the trip to Germany. Defender Ben Davies is also set to miss out after suffering a hairline fracture. With a congested fixture schedule ahead, expect to see a few changes from the Londoners.

A very interesting matchup in prospect, there will be a few things to watch out for ahead of this game. The main talking point coming into this game has been the similarity in the formation of both teams. Both managers – Oliver Glasner and Antonio Conte- have preferred a 3-4-2-1 formation, with two forwards sitting just behind the main striker providing a three-pronged attack.

Both teams have surprisingly a common style of play, building up from the back through their three center-backs and the goalkeeper, with the central midfielders moving up to allow the wing-backs to push a bit further up the field. Antonio Conte sometimes allows either of the center-back to maraud forward with Pierre-Emile Hojbjerg then covering the position in defense. This lets the Spurs have an extra attacking option in the final third.

Frankfurt will also often look to get the ball to their flanks and their wing-backs will maintain the width and allow teammates to take runs centrally into the box. Attackers like Rafael Santos Borre and Randal Kolo Muani will move constantly trying to make runs in behind the defense. They have practised well and often time their runs to perfection which creates many scoring options for the Germans.

Furthermore, Glasner has a good reputation of adapting well to his opponents. He will not always look to hold on to possession against better teams, and will instruct his players to play on the break. They have the pace and power in form of Daichi Kamada, Jesper Lindstrom and Muani. Tottenham will look to stay as organized as possible and will look to restrict Frankfurt’s runs in behind their defense.

While both teams lineup and set their play similarly, the gulf in quality of their respective players is huge. The likes of Harry Kane and Heung-min Son are established attackers who excel not only in goal-scoring but also in creating opportunities and spaces for other attacking outlets. While Frankfurt, under a young coach, have sometimes demonstrated exceptional football, Spurs undoubtedly have the advantage of a far more experienced side who have the better players. It will be a one-to-watch and on paper has the makings of a brilliant end-to-end tactical battle.

The standout player for Tottenham and England will once again be crucial to his team. Leading the line, he synergized wonderfully with Heung-min Son and Richarlison on Saturday, and the Englishman is looking more dangerous with so many top-notch attackers all around him. In a game where the hosts dominated play and he had few chances, he scored once again in the Premier League against Arsenal with a well-taken penalty. On Tuesday night, he is anticipated to lead the line once more and to challenge the Germans. For a while now, Harry Kane has been considered one of the top strikers in the world, and when he is on the club roster, a goal is always just around the corner.