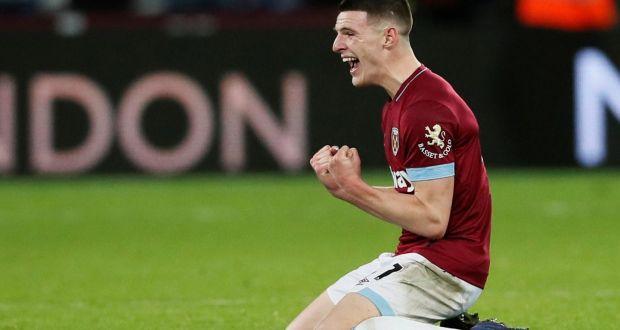 England are set to start their Euro 2020 qualifiers this month and manager Gareth Southgate will soon announce his squad for the qualifiers.

England face Czech Republic and Montenegro next week. Many experts and fans have asked manager Southgate to bring in West Ham United midfielder Declan Rice in place of Eric Dier.

Rice has been in exceptional form this season which has seen him emerge as one of the best defensive midfielders in the league while Dier has struggled with injuries and failed to impress when playing for Spurs. In 26 league games for West Ham, the player has scored twice and has been West Ham’s star player throughout their campaign.

His performances have caught attention from across Europe and reports reveal that Manchester City are interested in signing the player as they look for an alternative for the ageing Fernandinho.

Arsenal legend Ian Wright believes Rice is worthy of a call-up as he’s currently better than Tottenham Hotspur’s Eric Dier in the position.

Wright told BBC 5 Live sport, “Yea (I would put him in the England squad next week), it’s a position we’ve struggled to fill, we’ve not really got that player who can naturally do the role as good we’ve seen Declan Rice do at the minute

“He’s better than the Eric Dier, especially in that position, of course. And plus Eric is not playing at the moment, unfortunately for him, but at the same time we’re talking of someone who is in top form at the minute, he’s ready to go.

“I say bring him and let’s have a look. He looks like he’s got everything. Comfortable on the left and right, see the danger, scores goals, we’ve seen him get forward and score goals, what are we waiting for?

It would be a poor call if Southgate decides to go for Dier rather than rice considering how excellent he has been this season while Dier hs struggled with injuries since 2018 world cup.

“He looks like he’s got everything… what are we waiting for?”@Ianwright0 believes West Ham’s Declan Rice deserves a call-up for Gareth Southgate's next England squad.