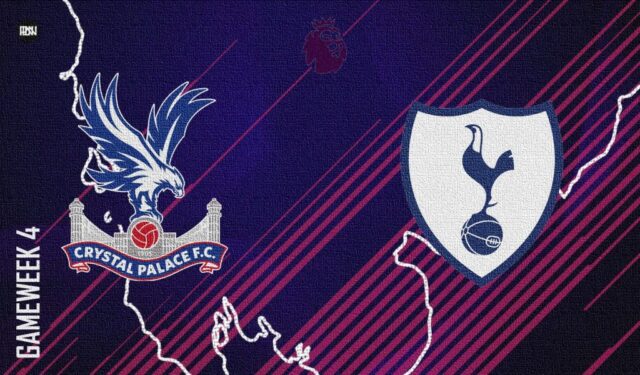 After a two-week-long international break, the focus will be now on the Premier League game-week 4 encounters as Crystal Palace will kick off the weekend when they welcome Tottenham Hotspur.

Crystal Palace will host the Premier League current league leader Tottenham at the Selhurst Park, with the hope of nailing their first win of the season, and Patrick Vieira’s first win since taking charge of the coaching position from Roy Hodson.

They’ve been unable to pull their strings together, failing to record a goal against Chelsea and Brentford in their opening games, losing one and drawing the other. Their 2-2 draw against the in-form West Ham team gave the fans a glimmer of hope, and they will be getting excited to see their team build on their last impressive outing.

Against West Ham, Crystal Palace made a double comeback with the help of the mesmerizing midfielder Conor Gallagher who was in a goal-scoring form during the encounter. His brace against West Ham dented David Moyes’ hope of having a perfect start to the season before the international break. The Eagles’ unglamorous start to the season has yielded just two points and has placed them in 14th position on the league table.

In contrast to that, Tottenham has maintained a 100% record in their opening three games against the reigning league champions Manchester City, Wolverhampton, and Watford, with a consistent display and result of one-nil, in favour of Spurs. They’ve incredibly kept three clean sheets along the line but the attackers are finding it hard to convert their chances.

It could be argued that their lack of goals has been because of Harry Kane’s limited game time so far this season, considering that he has only started just one game out of a possible three, due to his fitness concerns (or probable failed Manchester City move). Tottenham have had two of their goals scored by Son while the third came from the penalty spot.

Despite their minimal goal return, Spurs will be pat the top of the league table for the first time in as many years, which tends to give them a psychological edge over Palace while the Eagles will be hoping to carry on their impressive fight, hunger, and courageous display which might eventually yield their first three-point of the season on Saturday.

Luka Milivojevic seems to be in line to make a return after recovering from an injury and Michael Olise who hasn’t made his debut due to a back injury could make an appearance on the bench. While the likes of Ebere Eze, Jeffery Schlupp, and Nathan Ferguson will remain absent from the matchday squad.

Nuno Espirito Santo will be without some of his first-team players like Davidson Sanchez who went to a red-list country during the international break while Cristian Romero and Giovani Lo Celso were caught up in Brazil vs Argentina Covid hullabaloo. This leaves the coach with only Eric Dier and Joe Rodon, who looks likely to make his first appearance this season.

Another major problem for Spurs will be in the attack, with their current top scorer Heung-min-Son (2) suffering a calf injury during international duty. While Ryan Sessegnon will also sit out the match due to a knock he suffered before withdrawing from the England under-21 squad.

Regardless of the injuries and suspensions, it has been revealed that Oliver Skipp could play a part on Saturday.

Time for Palace to go on full attack?

With a depleted Spurs’ defence, Patrick Vieira will look to capitalize on Spurs’ lapses by unleashing Odsonne Edouard who joined on deadline day. The Frenchman’s addition and Wilfried Zaha’s impact will add much bite in Palace’s attack who had managed to score two goals in three matches. This will be the first look at the duo of Zaha and Odsonne Edouard, and while their profiles suggest – they might complement one another in the final third which will give Palace different dynamics to explore.

While Anderson and Guehi still getting accustomed to one another, Nuno Espirito will consider unleashing Emerson Royal and Bryan Gil as a secret weapon against Palace, which seems the perfect opportunity to ease both players into the starting line-up alongside the experienced winger Lucas Moura and the ever-reliable Harry Kane who has an impressive number of goals against Palace, scoring 12 goals in 14 meetings.

Wilfred Zaha’s unpredictable and trickery style of play has being a nightmare to several Premier League defence. Despite not registering a goal yet this season, the Ivorian possess the ability to decide the outcome of the game with an individual brilliance which the fans will be anticipating to see against Tottenham.

Harry Kane’s presence will be a nightmare to Palace defense, scoring 12 goals in 14 meetings against Crystal Palace is a record that the Eagles’ needs to be wary of, and to make it 13 or more on Saturday doesn’t seem to be impossible, but Anderson and Guehi will have to be on their toes all through the game to stop Kane’s ruthlessness in front of goal.