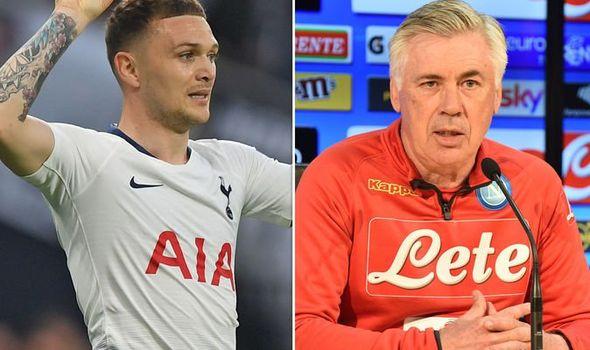 ​Napoli Manager Carlo Ancelotti has expressed in signing Tottenham star Kieran Trippier this summer. Trippier has struggled to show consistency in his performances this season and has been criticized for his poor displays.

After arriving from the 2018 World Cup as a star for England much was expected from the FullBack but the player has not quite lived up to his expectations at the club this season.

The player has been linked with a move away from the club as the clubs look to raise money to fund in new transfers.

Recent Rumours revealed that the player’s wife has seen in Naples scouting potential schools for their son.

Calcio Mercato, reports what Ancelotti said of the rumours: “I don’t like talking about players from other teams.

“Trippier’s wife in Naples? I honestly don’t know, but Naples is a beautiful city, there are people who come on holiday.

“But [PSV winger Hirving] Lozano and Trippier are players who we are evaluating, then later there is everything else that is much more complex.

“Negotiations, players who prefer other things. These are among the players we are interested in.”

Trippier is a player far from over and losing him would be a big mistake as the player struggled for fitness but still delivered so amazing performances for the Lillywhites. Judging him based on 1 season will be to harsh on the player and he deserves to stay at the club for years to come.

Lucas Moura to be sacrificed in Arkadiusz Milik swap deal?